A lively and compelling self-drive tour from Seattle heading south through Orgeon and California along the beautiful Pacific Coast, visiting iconic music sites along the way. Begin in the cool city of Seattle, home to Nirvana and Pearl Jam, and where you can explore the brilliant Museum of Pop Culture with facsinating, interactive music exhibitions. You'll have chance to discover the beautiful scenery of the Olympic National Park before arriving in the next cool city - Portland with its thriving music scene, renowned microbreweries and superb downtown food trucks. Enjoy time on the gorgeous Oregon coast and then move onto charismatic San Francisco. You might want to time your holiday to coincide with the Monterey Jazz Festival in September or simply enjoy a relaxing stayover in this lovely region of seaside resorts. Next stop is LA where you could spend the evening at the Viper Room or the Roxy - a legendary stage where new artists kick-start their careers. Onwards to Palm Springs, location of the Coachella music festival and year round home of great live music venues, then your final stop is "The Entertainment Capital of the World" - Las Vegas. (ATI) 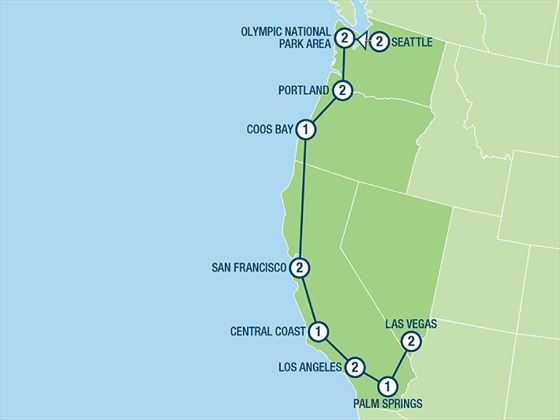 Fly into Seattle and pick up your rental vehicle before driving into the heart of the lively and luscious Emerald City. Birthplace of legendary guitarist Jimi Hendrix, Seattle’s famous grunge scene in the 1980s paving the way for the likes of Nirvana, Pearl Jam and Alice in Chains. In recent years bands such as Fleet Foxes, The Head and the Heart and Macklemore & Ryan Lewis have all originated from here. Visit the Museum of Pop Culture and discover the exhibitions devoted to popular culture, local and international music. Time your trip in conjunction to attend brilliant music festivals such as Bumbershoot, Sasquatch and Northwest Folklife. Dig through hundreds of vinyl albums at a number of record shops like East Street Records.

Whilst you’re there, take a visit to Pike Place Market is a must do with an abundance of eateries, locally sourced produce and watch the famous fishmongers tossing fresh catches to their customers! Wander over to Seattle’s Chinatown to savour the flavoursome Asian cuisine. Optionally enjoy panoramic views at the iconic Space Needle or sit back and enjoy a harbour cruise.

Journey onwards to the Olympic National Park – a beautiful park for outdoor enthusiasts as it checks all the boxes for activities such as hiking, climbing, sightseeing and skiing. Throughout the park you will also find its extensive eco-system, age old rainforests and shores of the Lake Crescent and the Pacific Ocean and the pyramidal peaks of the Olympic Mountains.

Known as “America’s Indie Rock Mecca” Portland has been a focal point of indie music since the mid-1990s. Also hosts of many music events and festivals such as PDX Pop Now, MusicFestNW and Concerts in the Park. Discover the delicious culinary scene from its famous food carts around every corner, to its expansive menu of locally sourced seafood and home to the legendary Voodoo Doughnuts, it’s plentiful microbreweries and the Willamette River waterfront. How about a change of scenery as you take in a performance at the Portland Opera or see the Oregon Symphony?

Take a detour as you explore the Oregon Wine Country in the Willamette Valley. Known for its extensive number of wineries and renowned for its pinot noir, Willamette is home to over 300 wineries and counting and is a perfect place to stop by as you make your way to magnificent Pacific Coast. Look around Red Hills Market in Dundee for some local souvenirs or how about some delicious wine tasting at Argyle Winery. Follow the Oregon Coastal Highway towards Coos Bay, exploring the seascapes and quaint towns en-route. Home to the Oregon Coast Music Festival, where you can witness the classical concerts from musicians all over the country and Canada. Don’t miss out on trying its delicious seafood and exploring the gorgeous beaches.

Arriving into the Golden Gate City and immerse yourself in its history, which was the hippie subculture in the 1960s. Over 100,000 people congregated on the Haight-Ashbury neighbourhood during 1967 “Summer of Love”. Visit the famous street corner, see where the Grateful Dead band lived at 710 Ashbury Street and walk to Buena Vista Park to recognise the colourful Victorian houses. Head over to The Fillmore, a 1912 venue that once drew the likes of The Rolling Stones, Janis Joplin and Prince. San Francisco has hosted a number of notable performances such as Led Zeppelin at Kezar Stadium and The Beatles’ final live show at Candlestick Park. A trip through the Golden Gate City shouldn’t be without a visit to some music venues including Feinstein’s at the Nikko for some Broadway showtunes, Club Deluxe for some smooth Jazz and Bottom of the Hill for local Indie and Hip-Hop artists.

Swap the hills for stunning drive along the California Coast as you head along Highway One through Monterey. Home to one of the world’s longest-running Jazz festivals in September, Monterey Jazz Fest. Plan your trip so it coincides with this great event or carry on south to spend the night in some gorgeous Pacific Coast towns such as San Simeon, Morro Bay, or Cambria.

Journey along the awe-inspiring California Coast, stopping in Santa Barbara for lunch before arriving in Los Angeles, home to the likes of music giants Capitol Records and A&M Records. Visit the legendary STAPLES Center, host to many years of Grammy Awards Ceremonies and right next door to the Grammy Museum – an interactive, educational museum devoted to the history and winners of the Grammy Awards. Some other iconic venues to note are Hollywood Bowl, Troubadour and Greek Theatre. Visit the famed Sunset Strip in West Hollywood as music fans continue to flock to Whiskey a Go Go, once hosted bands such as the Doors and Led Zepplin. How about a visit to the Roxy, renowned for where new artists kick-start their careers? The City of Angels is brimming with music avenues and should be explored over a multi-night stay. Chock-full of celebrities, no doubt you’ll be able to see them in the likes of Chateau Marmont, Ace Hotel or even Wolf Gang Pucks restaurant at Hotel Bel-Air.

Home to the famous Coachella and Stagecoach music festivals, enjoy a city where the stars go to unwind. Coachella spans two weekends in April and a multitude of genres. Past performances include Calvin Harris, Lady Gaga, Coldplay, The Cure, Guns and Roses and Sir Paul McCartney. Looking for more country music? Head to Stagecoach, also in April, for your fix. Past performances include Willie Nelson, Carrie Underwood, Brooks and Dunn and Shania Twain. Don’t worry if you can’t make those festivals as Palm Springs offers some great live music venues such as the Purple Room Supper Club, Agua Caliente Casino Resort Spa and the McCallum Theatre.

Drive north for four hours towards the mega casinos and glittering strips that is Las Vegas. With past performances and residencies from the most legendary of artists include The Rat Pack, Barbara Streisand, Elvis Presley, Sonny and Cher, Dolly Parton and Liberace. Current residencies include Elton John, Celine Dion, Cher, Britney Spears and The Who performing at iconic venues as the Colosseum at Caesars Palace, Park Theater at Monte Carlo and The AXIS at Planet Hollywood. Touring artists make stops at the MGM Grand Garden Arena and the T-Mobile Arena.

Return your rental vehicle prior to your flight as your trip comes to an end.

Splendors Of The West

Attractions of the West by Motorhome