Journeying from the east coast to the west, this amazing American tour visits some of the nation’s top highlights, beginning with a night in New York. Following on from that, you’ll visit Philadelphia, Washington and the Gettysburg battleground before visiting the awe-inspiring Niagara Falls on the New York side. From here, make you way to Detroit and Chicago, before moving westwards to the Badlands National Park, Mount Rushmore and the Old West history of the Black Hills. Take in the sights of Yellowstone National Park and Teton Mountains on your way to Salt Lake City, then it’s Bryce Canyon, Lake Powell and Grand Canyon itself. Venture to Las Vegas down Route 66, before heading back into the desert and into California to arrive in Los Angeles.

If you would like to explore more of the West Coast, you can also extend this tour to continue to San Francisco. Spend two more days travelling up the California coast, ending in San Francisco. (ATI) 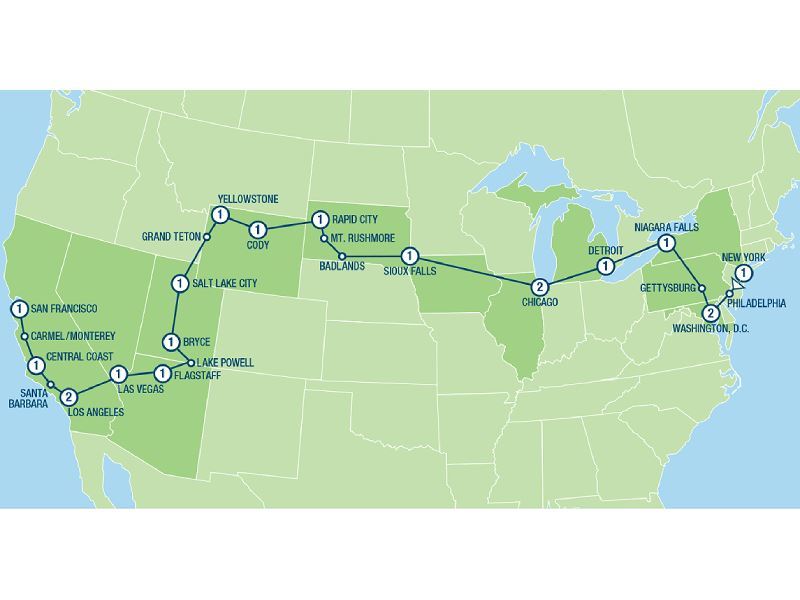 On arrival into New York, transfer independently to your hotel and meet up with your dediated Tour Manager

Today you will depart from New York for Philadelphia, where you’ll spend the morning exploring the historic district of the "City of Brotherly Love" and the National Constitutional Centre. You’ll see the Liberty Bell, the Independence National Historic Park and the Mall. Continue on to Washington D.C – the nation’s capital - for a two night stay.

Enjoy a city tour today with such highlights as the U.S. Capitol Building, Washington Monument, Lincoln Memorial, the White House and Arlington National Cemetery, the site of the John F.Kennedy Memorial. Spend the remainder of the day exploring some of the many museums comprising the Smithsonian Institute.

Today, visit Gettysburg National Military Park, site of one of the most decisive battles during the American Civil War and the place where Abraham Lincoln gave his famous address in 1863. You’ll then travel through upstate New York to Buffalo and finally cross the international border to Canada, where the thunderous sound and mist of Niagara Falls permeates the air.

Spend the morning sightseeing at Niagara Falls. Stroll along Table Rock and view the thundering waters of Horseshoe Falls. Travel onwards to Detroit, known as motor city USA. Detroit is home to the country’s automobile manufacturing centres. The evening is yours to spend at leisure.

Travel along Lake Michigan today as you leave Detroit. Continue on to Chicago, where you will enjoy a short tour of the city’s highlights including Lake Shore Drive, the Magnificent Mile and Navy Pier. The Windy City’s stunning high rise architecture and one of the world’s tallest buildings, the Sears Tower (admission not included), provide a dramatic backdrop for this cultural and financial centre. Check into your hotel for a two night stay.

A full day at leisure in Chicago awaits you, giving you chance to explore the museums, architecture or perhaps enjoy a river cruise (optional). The Tour Manager will have plenty of suggestions and recommendations for you.

Travel through Midwest farm country abundant in corn fields, wheat fields and dairy farms. Then you’ll cross the mighty Mississippi River and travel into the state of Iowa to arrive just as Lewis and Clark did 200 years ago on the banks of the Missouri River where you’ll overnight in Sioux City.

Travel westward through the grasslands of South Dakota and onwards to Badlands National Park, once home to the buffalo and antelope, and filled with strange shaped and colourful rock formations. Then you continue on to the Black Hills, sacred to the Indian Plains and home to Mount Rushmore, an enormous monument to four great American presidents – Washington, Jefferson, Lincoln and Roosevelt.

Hotel: Baymont by Wyndham Keystone Near Mount Rushmore or similar

Enter the state of Wyoming, which has twelve mountain ranges intermixed with deserts and rolling grasslands, and continue to Cody for the night. (If overnight in Cody is not possible due to weather or adverse road conditions in Yellowstone, overnight will be in Billings/Livingston, Montana.)

Drive past the mountains in Wyoming to Yellowstone - America’s first National Park - and enjoy a sightseeing tour of this immense geothermal wonderland, including geysers, waterfalls, wildlife and canyons. Highlights of the park will include Yellowstone Lake, Old Faithful, Mammoth Hot Springs, Yellowstone Canyon’s majestic falls, and the beautiful Hayden Valley.

Travel through Grand Teton National Park (weather permitting) and see awesome mountain peaks towering over 13,000 ft. Visit the Snake River Outlook and capture the stunning landscape made famous by Ansel Adam’s iconic shot. This prairie land is home to wild buffalo (Tatonka), moose and elk. Later, arrive in the Mormon State of Utah and take a short city tour of its capital, Salt Lake City. See the State Capitol building and visit famed Temple Square and the Tabernacle, before arriving at the hotel for the evening. Why not have dinner at the Rooftop Restaurant for panoramic views of Temple Square (optional).

Continue to Bryce Canyon, where a tour through a multi-coloured world of sandstone spires and pinnacles will dazzle the eye. This evening, weather permitting, be sure to gaze upon the spectacular night sky filled with sparkling stars & brilliant constellations and the aroma of pinewood campfires.

Depart Bryce Canyon this morning and journey to stunning Lake Powell, where crystal blue water laps against towering red-rock canyon walls. Lake Powell is the second-largest man-made lake in America, and one in a series of lakes formed by the damming of the Colorado River. Then visit colossal Grand Canyon National Park, one of the seven great natural wonders of the world. Stop at the Canyon rim to fully experience this mile-deep canyon’s plunging gorges, rising spires, extinct volcanoes and, below the rim, the winding Colorado River. Overnight in Flagstaff, a famed stop on historic Route 66.

This morning, depart Flagstaff and travel on to Las Vegas, the dazzling 'Entertainment Capital of the World'. Along the way, pass through Seligman, a town built along the famed Route 66 that looks as if it were frozen in time sixty years ago. The remainder of the day is at leisure for you to explore the famous Las Vegas strip.

Travel to Los Angeles through the Mojave Desert, where clusters of unique Joshua trees dot the mountainous landscape. Upon arrival in Los Angeles, you will enjoy a tour through the City of Angels including Hollywood, Sunset Strip and parts of Beverly Hills, before arriving at approximately 6.30pm.

Today you have a full day at leisure, so we suggest you take an optional tour of the world's largest movie studio and theme park - Universal Studios. Here you can take an inside look at the sets and uncover the secrets behind the scenes or take a feature ride such as Jurassic Park and Revenge of the Mummy.

Independent transfers back to the airport for your return flight.

Leave Los Angeles and head north along the Pacific Coast, through the glamorous resort of Malibu up to the fabulous coastal city of Santa Barbara. Here you will find palm-lined promenades along the white sandy beaches, with the architecture influenced by the Spanish heritage.

Head north to the charming town of Carmel, home of Clint Eastwood, where quaint boutiques and art galleries are well worth browsing. Continue to Monterey and visit Old Fisherman's Wharf, the Pier and Cannery Row. Arrive in San Francisco late afternoon / early evening.

Today your tour comes to an end. It's time to head to the airport for your return flight home.

Please note for 2022/23 this tour will not cross the Canadian border and the Niagara Falls hotel is located in New York.