Whatever you're looking for from your holiday, you can be sure to find it in Florida. From America's best beaches to America's best theme parks, Florida really does have it all and with a year-round tropical climate it makes the perfect getaway at any time!

At American Sky our team of travel experts have access to hundreds of hotels, apartments and private homes so you can be sure they'll find the perfect Florida holiday for you. If the open road appeals, check out our Florida Fly Drive holidays.

Orlando is described as the Theme Park Capital of the World, and it’s not difficult to see why. It is home to Walt Disney World Resort, which made up of four theme parks, two waterparks and two entertainment complexes (Downtown Disney and Pleasure Island), and Orlando Universal Studios consisting of two theme parks (one which contains The Wizarding World of Harry Potter) and an entertainment complex (CityWalk).

West of Orlando is Busch Gardens, a great combination of safari park and theme park, and worth a day trip either from Orlando or the coast.

An hour’s drive east of Orlando is the Kennedy Space Center which now houses the retired Atlantis space shuttle and a multitude of space based attractions.

The newest theme park outside of Orlando is Legoland Florida, just 45 minutes away. With rides, shows and attractions featuring thousands of spectacular LEGO constructions, this will appeal most to families with children under 12.

South of Orlando and to the West of Miami lies the famous Florida Everglades - the largest mangrove ecosystem in the western hemisphere. Covering over 2,000 square miles, the best way to see the Everglades is by airboat. There are many attractions throughout the Everglades offering airboat rides such as the Everglades Alligator Farm and the Everglades Safari Park.

To the west of Orlando lies the Gulf Coast with some of the best beaches in America, and some would say, the world. Near to Sarasota is Siesta Key, where the beautiful sand is clean, the water is warm, and you can extend your day to include the spectacular sunset.  By Fort Myers are the stunning islands of Sanibel and Captiva, where you can just chill on the beach or enjoy a great choice of watersports, cycling and golf. Naples is a delightful resort, with beautiful beaches and calm seas, alongside a superb choice of restaurants and shops, plus golf, watersports and other energetic activities.

The Keys lie at the very southern tip of Florida, extending in a gentle arc south west to its furthest point at Key West. The gateway is Key Largo, a lovely resort with good snorkelling and diving, continuing to Islamorada which comprises of six islands, through to Marathon which is a great destination for families and where the photogenic seven mile bridge begins, through to the laid back resorts of the Lower Keys. The end point is Key West, a unique destination summed up with the strapline “Close to Perfect, Far from Normal”. By day, there are wholesome attractions such as diving, fishing, watersports and golf to enjoy. The sunset is celebrated by jugglers, musicians and street artists and the city then morphs into a hub of open air bars and world class restaurants. This is an artistic city, with a thriving culture of galleries, theatres and music venues.

South Beach is world famous for its Art Deco architecture, world class shopping and vibrant nightlife. Take a walking tour of the Art Deco district, stroll along the boardwalk or just sit on a terrace and watch the world go by. There are massive malls and a fantastic range of designer and brand name shops. Collins Avenue is where you will find Armani and Versace, along Ocean Drive the boutiques are funky and fashionable. There are ultra-cool nightclubs and “see and be seen” bars, such as LIV at the Fontainebleau and Sky Bar at the Shore Club, plus a whole host of music venues and cocktail bars to enjoy late into the night. 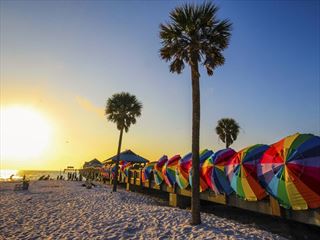 The best places to go for your next Florida beach holiday

If you’re hoping to take advantage of Orlando’s famous theme parks, you might want to combine the trip with a coastal holiday. For an especially memorable vacation, choose one of these options, or perhaps combine more of your favourites to create the ultimate adventure through The Sunshine State. 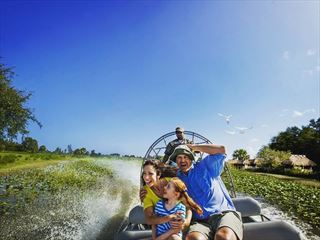 Top 10 things to do in Everglades National Park

The one million acres of sub-tropical wetlands offers fantastic opportunities to discover the wildlife, participate in the unique triathlon or take one of the fantastic boat tours... 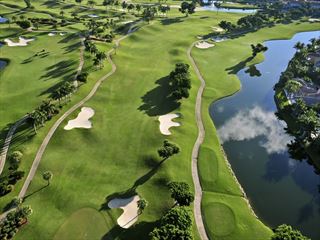 The Sunshine State boasts over 1,250 courses, including the championship courses of The Grand Cypress and ChampionsGate, all open 365 days a year...

Inspired travel with our expertise