Part of the Deep South, Kentucky is a vibrant and exciting destination. Home to decadent bourbon, the lively spirit of Louisville, friendly Southern hospitality and natural beauty aplenty, Kentucky should be high on your list should you fancy a taste of authentic American fun.

The State, or Commonwealth of Kentucky, as it’s officially called offers a wealth of amazing experiences. Experience the tastes, sounds and excitement of the so called ‘Big Three’ – bourbon whiskey, bluegrass music and of course the renowned horse capital of the World. And there’s so much more of course, with Kentucky’s great outdoors, deep history and culture as well as the amazing array of food and dining the State affords the discerning visitor.

Things to do in Kentucky

The foot stomping sounds of bluegrass music are to be heard across the state that created this distinctive style of music. Indeed, you can explore its fascinating roots and development at the Bluegrass Music Hall of Fame and Museum in Owensboro.

The world-famous Colonel Sander’s KFC may have its origins in Kentucky, but the state provides a wide array of other delicious culinary offerings.  BBQ mutton gives a unique Kentucky take on this distinctly southern fare, while other state staples include Burgoo, a delicious spicy stew, and beer cheese, a tasty spread or dip and supposed favourite of Queen Elizabeth II.  Kentucky is also home to world renowned bourbon whiskey. You can explore its intriguing history and heritage across the state by exploring the Kentucky Bourbon Trail® or taking in the small batch distilleries along the Kentucky Bourbon Trail Craft Tour®. In Louisville, sample cocktail delights such as the Old-Fashioned as part of the Urban Bourbon Trail.

Any Kentucky road trip will feature miles of iconic black and white fencing giving rise to the rich equine heritage the state is famous for. Key spots to take in are Keeneland in Lexington and Churchill Downs racetrack in Louisville. Equestrian lovers should head for the Kentucky Horse Park and racing fans should take in the Kentucky Derby Museum.

Trails and museums also offer a fascinating insight into some of Kentucky’s most famous residents, including the likes of Abraham Lincoln and Muhammad Ali. Nature and outdoor adventures abound in the Bluegrass State with a vast array of mountains, caves, coves and shorelines on offer, especially in the Kentucky State Parks. Hiking, biking, boating and paddling are firm favourites and be sure to take in amazing subterranean world of Mammoth Cave National Park.

When to go to Kentucky

With its central location, Kentucky enjoys a typically mild and moderate climate. Daytime summer temperatures average 30°c whereas winter lows average -5°c. Kentucky is most popular in the Spring and Autumn. The state’s legendary bluegrass comes alive in spring and Autumn the countryside is ablaze with the fall colours. 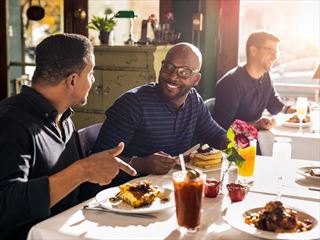 A true taste of Kentucky

Wholesome, comforting and rustic, the traditional cuisine of Kentucky tastes like home and brings natives back to the Bluegrass state with every bite.

Inspired travel with our expertise

The Sumptuous Soul of America