Utah is home to some of America’s most spectacular national parks, making it easy to create an unforgettable road trip that explores the best of the state’s offerings and then some. You’ll be able to experience what’s often referred to as the “Mighty Five” - Canyonlands, Zion, Bryce Canon, Arches and Capitol Reef national parks as well as famous destinations like Monument Valley, a fantastical wonderland of spires, buttes, and unique, natural red rock formations that look like works of art.

There are various starting points for a Utah road trip, including Las Vegas but here we’ll focus on a circular route from Salta Lake City which has frequent direct flights. You’ll find plenty of things to do here, some of which can provide a good layout of the land and a brief history of the region for some insight on what you might expect, like the Natural History Museum. The 163,000-square-foot architectural wonder known as the Rio Tinto Center forms a multi-story indoor canyon in the foothills of the Wasatch Mountain Range that houses this institution. It contains a wide range of fun interactive exhibits showcasing natural history as well as the cultures of indigenous people. A highlight is the Past Worlds paleontological display which feature a unique perspective from beneath, next to and above a vast collection of dinosaur fossils. Utah is one of the richest areas on Earth when it comes to dinosaur-fossil discovery, and the exhibits of massive skeletal creatures from the past make this museum a must-visit alone.

When you’re ready to get out on the road, set the first destination on your GPS to Moab.

The ideal place to base your stay for exploring Arches National Park and Canyonlands National Park is Moab as both parks are just a short drive away. The town itself offers quite a bit of its own to enjoy as well. You may want to find out which movies have been filmed in the area by visiting the Moab Museum of Film and Western Heritage at Red Cliffs Lodge. Of course, most people come here to experience the extraordinary scenery and outdoor adventures, so you’ll want to get out and actually experience some of the scenes you’ve probably only seen on the Big Screen in real life.Arches National Park is renowned for its giant pinnacles, over 2,000 sandstone arches, and massive balanced rocks teetering on pedestals as if a breath might tip them over. Framing the sky with peek-a-boo windows, the arches are dotted across a colourful landscape of vibrant orange, scarlet red, and an array of purples, pinks, and browns, and even an occasional smattering of aquamarine. While some arches can be viewed from behind-the-wheel, it’s best to get out and explore on foot. The Delicate

Arch trail, one of the most popular in the park, is just over 3 miles round trip and will bring you to another one of the world’s most famous natural arches: Delicate Arch. Or, if you’re looking for something a bit longer, the 7.2-mile Devil’s Garden Loop showcases seven unique arches.

The main road through Arches National Park is the Arches Scenic Drive, spanning 18 miles while passing some of the park’s most impressive landscapes.  Many of the namesake rock formations can be seen from here, and there are a number of trailheads just off the road for getting out stretching your legs. Be on the lookout for wildlife like bighorn sheep, mule deer, eagles, bobcats, mountain lions and coyotes along the way.

Canyonlands National Park is an outdoor enthusiasts dream, with opportunities for four-wheeling, hiking and mountain biking, as well as rafting and kayaking along the Green and Colorado rivers. Dead Horse Point State Park is just outside the national park and one of the best spots for watching the sun go down. Try to plan your visit so that you’re here around dusk and you’ll witness one of the world’s most remarkable sunsets across a panorama of massive cliffs that were formed by the eventual dissipation of ancient seas.

Canyonlands itself is divided into The Needles, Island in the Sky, The Rivers and The Maze District, with Island in the Sky the most easily accessible. Here you’ll find plenty of overlooks for capturing photos, miles and miles of trails for hiking and more. Horseshoe Canyon is in a remote area of the park and hosts a 7.2-mile roundtrip trail that will lead you to an especially intriguing rock art panel known as the Great Gallery. Considered to be one of the country’s most well-preserved and finest collections of Barrier Canyon style rock art, it features life-size figures with very detailed designs in various shades of brown, white and red along the sandstone walls, surrounded by depictions of animals. A two-wheel-drive vehicle can travel the 30 miles of dirt road from Highway 24 to the trailhead. 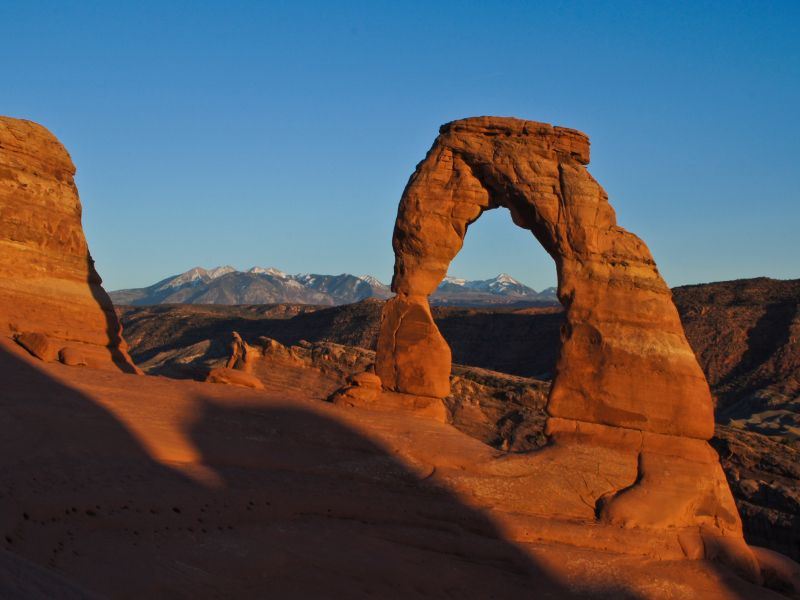 Monument Valley, Antelope Canyon and an optional trip to the Grand Canyon

Heading about 140 miles southwest toward the border of Arizona, you’ll reach Monument Valley. One of the most enduring and definitive images of the American West, rain, wind and other elements over the millennia have carved the towering red-sandstone monoliths into spectacular formations that rise from the landscape today, many of which soar hundreds of feet above the desert floor in an iconic scene that’s remained untouched for centuries. The isolated red buttes and mesas, surrounded by sandy desert, have been filmed countless times – it’s hard for many to believe that the colours seen onscreen and in pictures are actually as vivid if not more so in real life.

From here, you may want to head to Page – outside this Arizona town that’s just south of the Utah border in the heart of Navajo Country is Antelope Canyon, a 124-mile drive from Monument Valley. One of the world’s most photographed slot canyons, to explore it you’ll need to take a tour with a Navajo guide. The area is located within the Navajo Indian Reservation, managed by the Navajo Nation, with multiple outfitters offering guided excursions through the canyon. Your guide will share the geology and history of the canyon with its bright red sandstone and seemingly flowing rocks that are surely one of the most impressive sights on Earth.

From here, this is your opportunity to squeeze in a trip to the Grand Canyon, with the main entrance just a little over 100 miles from Page. The most popular national park in the country, many come to take in its inspirational panoramas. One of the Seven Wonders of the World, it measures in at an average width of ten miles, a length of 277 miles and a one-mile depth. Even the numbers can’t truly prepare you for what you’re about to see as you gaze out over the rim. 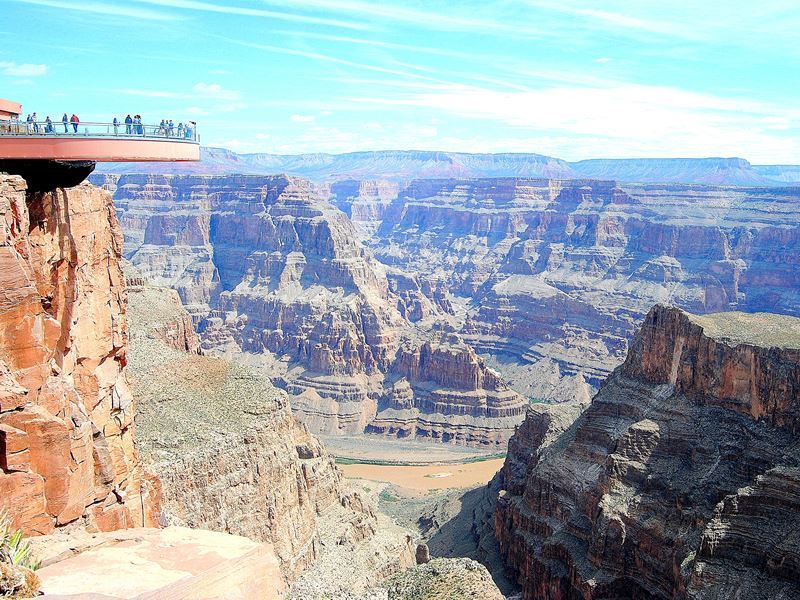 About 150 miles from Page or a little over 250 miles from the Grand Canyon is Bryce Canyon National Park, but you may want to take a detour to enjoy a scenic drive through Grand Staircase-Escalante National Monument first. Eight miles east of Kanab in Utah is Johnson Canyon Road which runs for 18 miles along a cliff-edged canyon, introducing the western edge of the monument as it passes renowned stair-stepped formations that include the Gray, White and Vermillion cliffs. Pull-outs along the way provide overlooks as well as trail access, and you can even check out the abandoned set for the long-running “Gunsmoke” TV series where you’ll be able to see a crumbling replica of Dodge City.

Next is one of the most awe-inspiring areas of the American southwest: Bryce Canyon. It’s not actually a canyon, but the edge of the Paunsaugunt Plateau. You’ll be mesmerized by the intricately carved arches and towers that boast a rainbow array of hues which glisten under the intense rays of the almost always present sun, along with thousands of hoodoos. Dotted across the landscape, the hoodoos look as if they’re trees made of stone. Bryce Amphitheater is the most visited area of the park, the place you’ll find many of its most famous structures. There are a wide variety of hiking trails for getting out and exploring as well as guided moonlight walks, star gazing and other ranger-led programs. 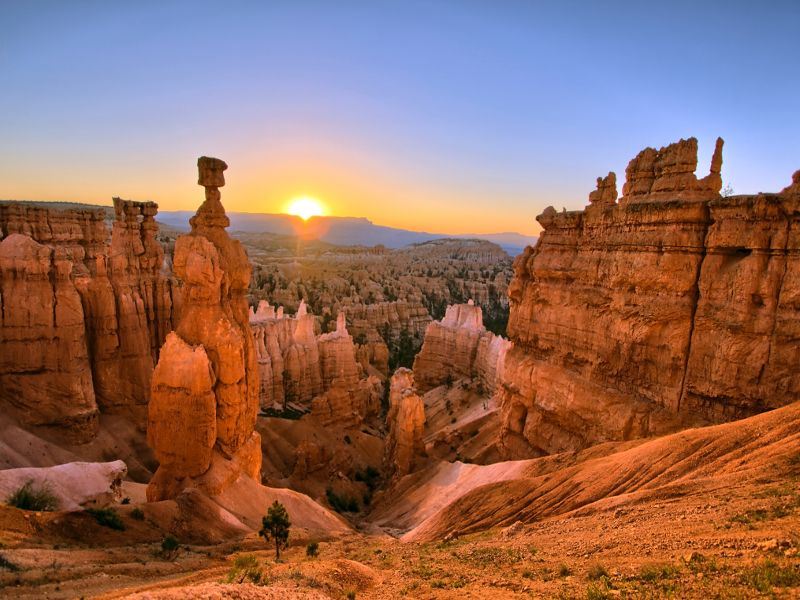 Venturing further northeast is Capitol Reef National Park, a place filled with ornate and unusual geological formations. The “Land of the Sleeping Rainbow” as the Navajo refer to it, this park takes textures, colours and shapes to a practically incomprehensible level. Witness the crown jewel, Waterpocket Fold, North America’s second largest monocline, which looks a bit like a coral reef turned inside out. Petroglyphs of the Fremont culture can be seen carved into sandstone formations depicting people, animal, shapes and other forms that provide evidence of their hunter/gatherer existence. View the multiple large panels that lie just east of the visitor centre on Highway 24 from the boardwalk and platforms. 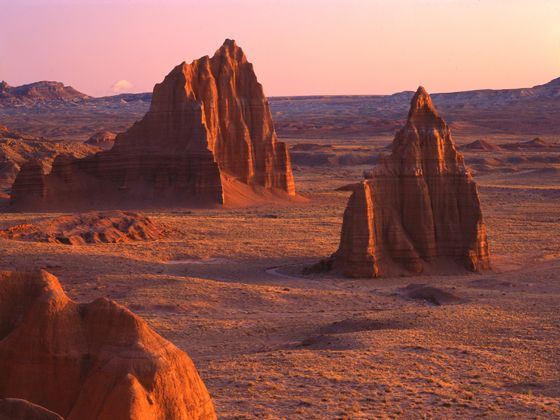 As you travel southwest toward Zion, your first glimpse of what awaits comes into view when exiting Mt. Carmel Tunnel. An ideal grand finale of this ultimate road trip through Utah and beyond, this park offers some of the Southwest’s most magnificent vistas and hiking opportunities. It’s home to cascading waterfalls, deserts, valleys, dramatic cliffs and rock formations. One of the many highlights is The Narrows, a gorge with walls that rise over a thousand feet high with a rush river, sometimes as wide as 30 feet wide. View it by hiking the one-mile route along the paved Riverside Walk from the Temple of Sinawava.

To escape the crowds, head to the more remote Kolob Canyons section of the park in the northwest region, known for its brilliant orange and deep pink glow created by the area sandstone formations. The picturesque Kolob Canyons Road makes an ideal scenic drive, stretching five miles from the entrance to a viewpoint of the finger canyon. It ends on a high ridge called the Kolob Canyons Viewpoint, where you’ll find the short Timber Creek Overlook Trail which provides even more impressive views from the top of the ridgeline. If you can, plan your hike to arrive here to catch one of the area’s most jaw-dropping sunsets. 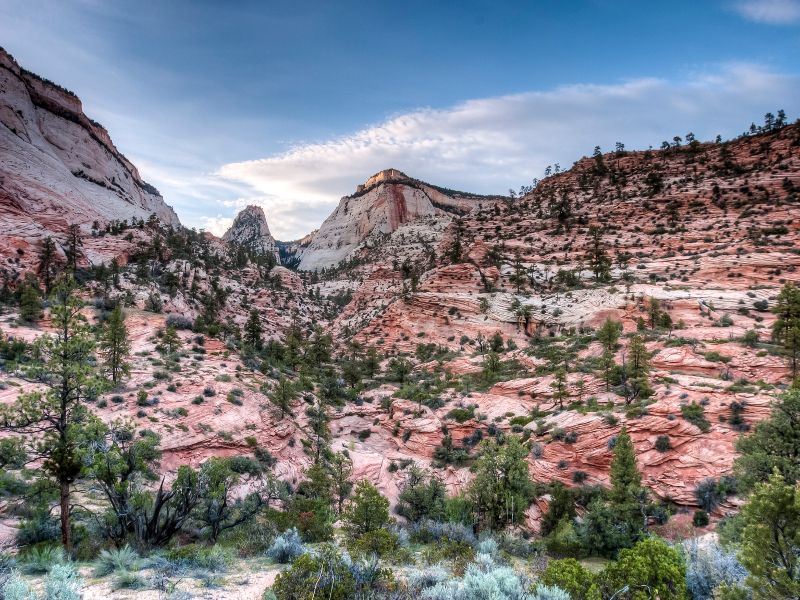 When it’s time to journey back to whence you began, it’s an easy half-day drive to Salt Lake City, so you might want to make a stop in Park City, the site of the 2002 Winter Olympics. While it’s famous for skiing, boarding and other snow sports, in the warmer months there are lots of hiking trails to explore, along with hot springs to soak in to soothe those sore muscles. In town you’ll find shopping at outlets and unique boutiques, a wealth of outstanding restaurants and even hopping nightlife in the clubs and bars. The Salt Lake City airport is just a 40-minute drive from here.

Here are some suggested holidays to enjoy these fabulous sights - we can tailormake these changing the number of days in each location, upgrading the hotels or extending your holiday to take in Colorado, California or fly over to Hawaii.

Utah Mighty Five and Beyond By Motorhome

Offer on selected holidays for clients who have travelled on board the Rocky Mountaineer previously.
13 nights From €3,159 pp
More Details