Top 10 things to do in Hawaii Volcanoes National Park

This is the home of two of the most impressive and aggressive volcanoes on the planet (Kilauea and Mauna Loa) and if you're searching for an exciting and dramatic landscape to form the backdrop to your next trip then look no further than Hawaii Volcanoes National Park.

Registered as both a UNESCO World Heritage site and an International Biosphere reserve, it will come as no surprise that a visit will encounter an incredible range of natural environments with everything from tropical rainforests to arid deserts to be found within the park's 323,000 acre borders.

Although the park is obviously a haven for geologists and volcanologists there are still plenty of other great things to light your fire and if you're thinking about getting all hot in Hawaii then below are just a few examples of how you can do just that. 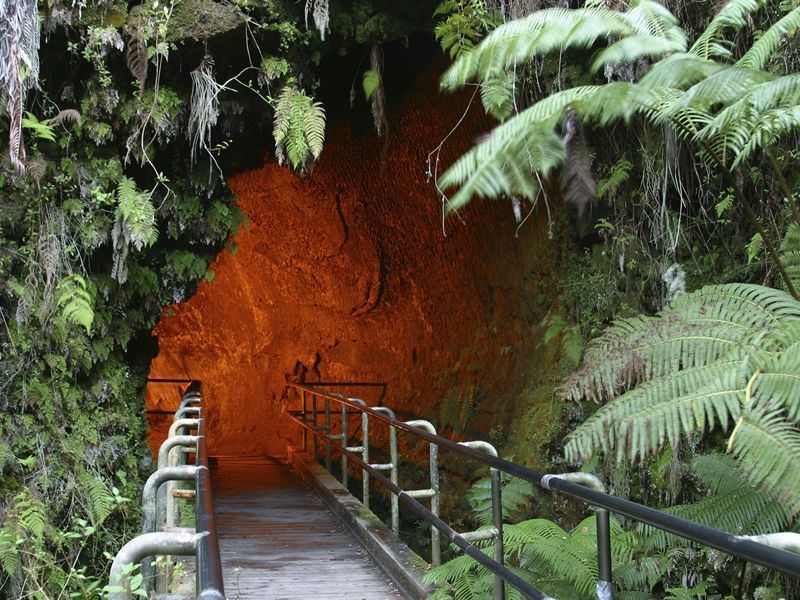 10. Loads of lava
You will be seriously amazed by the extent of lava that can be found within Hawaii Volcanoes National Park and from solidified trails to still glowing lakes, finding the right vantage point doesn't always have to mean getting too close. At the moment Halema'uma'u crater is burning brightly both day and night and views from the overlook at Jagger museum as well as from the summit of Kilauea volcano will give you plenty of photo ops from a relatively safe distance.

9. Scenic drives
There are various roads within Hawaii Volcanoes National Park that will take you past some incredible sights with the Chain of Craters Road and Crater Rim Drive promising some absolutely stunning scenery. Although it's always best to check with rangers for dangerous gas and lava flow warnings prior to setting off, driving through the park is an excellent means of experiencing volcanic activity from a healthy vantage point and with plenty of places to pause and take in the views you won't find a more exciting collection of roadways anywhere else in the United States.

8. Hiking trails
There's just something a little bit thrilling about strolling over a solidified river that was once hot enough to melt rock and even if it's not flowing any longer you'll still be inclined to step rather gingerly at first, just in case. As there are around 150 miles of designated walking routes within Hawaii Volcanoes National Park lava isn't the only path to follow and hikes to the summit of Kilauea and around the rim will enable you to view the fertile lands and examine the extent of the seismic activity without too much bother.

7. Jaggar Museum
Even if you weren't interested in volcanology before you arrived in Hawaii you soon will be after you've visited the Jaggar museum which can be found overlooking Kilauea volcano and just a couple of miles from the Kilauea visitor centre. This is one of the best places to find out more about lava, seismology, monitoring and just about everything else related to volcanoes and if you're hoping to catch some incredible mountains, desert and volcanic views then you won't be left disappointed.

6. Archaeological sites
As most young geographers will know, the fertile slopes of volcanoes are often too much of a temptation for people wishing to turn their hand to agriculture and the realm of Hawaii Volcanoes National Park is certainly no different. The park has been inhabited for over 500 years and archaeological sites, such as: the 1,790 footprints which were discovered near Kilauea, present a fascinating look back in time to when a thriving community once farmed, fought and lived within the dramatic shadow of the world's most active volcano.

5. After dark
If you thought that catching a glimpse of the red hot molten lava in the day was a pretty special experience then just try it after dark because if there's activity occurring during your visit then the best visual effects are certainly going to be after the sun sets. Red hot fountains spurting against a jet black background and a seemingly endless river of red flowing down the slope and into the sea have to be seen to be believed and following ranger advice as to the most current and safest viewing points is always best practice.

4. Cycle the caldera
They just don't make cycle tracks like this anywhere else in the world and if you prefer two wheels to four then cycling in Hawaii Volcanoes National Park is a brilliant option. Crater Rim Drive, in particular, is an exceptional experience and has to be done if you want to live to tell the tale of what it feels like to cycle directly into the steaming caldera of one of the world's most active volcanoes. Of course, not all routes are quite so dramatic and from desert landscapes to lush green tropical rainforest floors, you're bound to find the right path to suit you.
Take heed: only cycle on designated paths and keep an eye out for warnings with regards to volcanic activity and noxious gases.

3. Volunteer work
With such a vast stretch of land to protect there's plenty of work to be done the length and breadth of Hawaii Volcanoes National Park and if you fancy getting involved then there are a number of junior and adult volunteer programs to help you get started. 'Lopping' plants that aren't indigenous to the area, planting endangered plant species and protecting the natural nesting grounds of both the Hawksbill and the Green Sea turtles are all examples of work that is desperately in need of generous and hard working volunteers.

2. Overnight camping
If you've got ambitions to stay overnight in Hawaii Volcanoes National Park then you'll be pleased to hear that there are a couple of drive in camp sites offering an excellent opportunity to do just that. Namakanipaio camp site can be found around 30 miles from Hilo and features cabins, communal wash rooms and plenty of space to pitch up your tent whilst Kulanaokuaiki is a little more rustic and doesn't have access to water although it is free (after park entrance fees) and doesn't require a permit.

1. Get on a ranger tour
These guys really know what they're talking about and an early morning visit to the Kilauea info centre will give you the schedule of ranger-led activities for that day so you can pick and choose what you'd like to learn about. Most presentations and programmes are free and usually involve some sort of hike to see ancient engravings, lava tubes and the most rewarding view points in the park. Plants, birds and Hawaiian culture are all covered and what a ranger doesn't know about volcanoes hasn't been discovered yet so keep your ears pinned back for an interactive lesson that you'll never forget.

Further reading: If you're looking to discover more on your holiday to America's 50th state, then check out our top 10 things to do in Hawaii.