A true taste of Chicago

With their internationally-renowned Chicago-style deep-dish pizzas which are found everywhere from small local restaurants in the city to commercial supermarkets half way across the world and their infamous hot dogs which are made my street vendors found on almost every corner throughout the city, Chicago opens up a world of flavour to curious visitors, miles away from the fast food that many of us tend to associate with America. 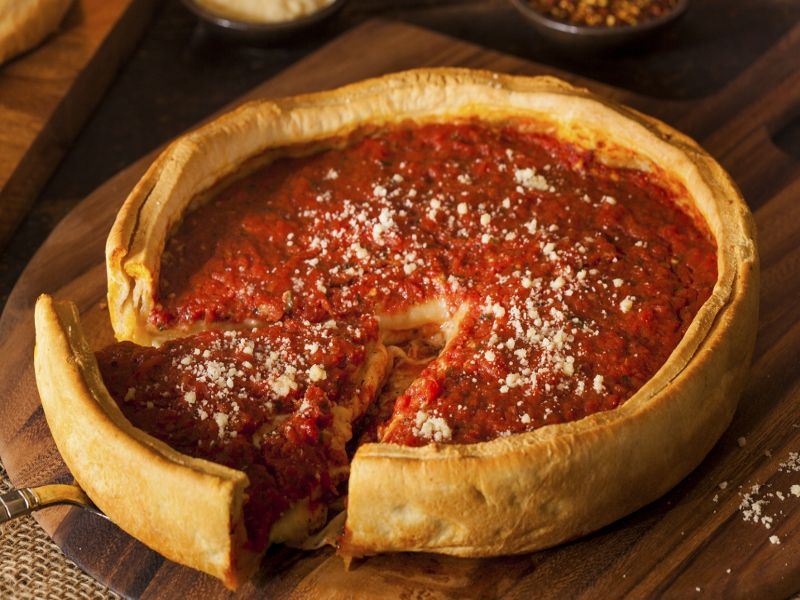 The history of food in Chicago

With a name like “Chicago”, the city was destined to be known for food. Whilst no one is 100% sure of the etymology, the Chicago History Museum claims that the city’s name originates from the American Indian word “Chicagaoua”, which referred to a small onion or garlic-like weed which flourished around Lake Michigan at the time.

So even before residents began whipping up all sorts of tempting ethnically-influenced recipes that would later see the city become a Mecca for foodies, it was already intertwined with food.

Chicago has a strong connection with food from all over the world. Between 1880 and 1900, thousands of people from all across Southern, Central and Eastern Europe left their home countries and travelled to Chicago to start a new life, bringing with them their local recipes and cooking methods which they continued to use in their new homes.
It’s thanks to this that today the Windy City lays claim to a number of regional speciality cuisines, each of which strongly reflects the city’s ethnic and working roots.

Chicago-style deep-dish pizza
The popular Chicago-style deep-dish pizza is probably the most well-known local speciality and is very different from the traditional Italian pizza. This variation of pizza is more similar to a pie in shape, with a thick bowl-like crust, and uses a lot more ingredients – in terms of quantity and variety. The crust is layered with cheese first, followed by the toppings and finally the sauce – the complete opposite way ingredients are put together on a typical Italian pizza.

Chicago hot dog
After pizzas, the delicious Chicago hot dog is the second most well-known local dish in the state. This tasty dish is made of an all-beef frankfurter which is tucked into a poppy seed bun, topped with yellow mustard, chopped white raw onion, neon-green sweet pickle relish, a dill pickle spear, tomato slices, pickled sport peppers and a sprinkling of celery salt. With so many toppings stuffed into one bun, this hot dog is often described as looking like it’s been “dragged through the garden”.

Chicago Italian beef
The Chicago Italian beef has got to be one of the best sandwiches in the whole of the US. This hearty dish is made up of thin slices of roast beef, smothered in a gravy-like sauce the meat was cooked in and tucked into a long Italian-style roll. The entire sandwich is then dipped – sometimes double-dipped – into the beef juices, before it’s finally topped with sautéed green Italian peppers.

You’ll find this sandwich served alongside Chicago hot dogs at most hot dog stands throughout the state, as well as in numerous local Chicagoan restaurants. Many venues also offer a “cheesy beef” option, which sees the sandwich finished off with a slice of provolone or mozzarella cheese. Some stands also offer a “combo” option which includes the addition of grilled Italian sausage, as well as the roast beef.

Chicken vesuvio
Although not quite as internationally-renowned as the pizzas and hot dogs, chicken vesuvio is without a doubt one of Chicago’s best speciality dishes. This Italian-American delicacy is comprised of chicken served on the bone alongside potato wedges, celery and carrots. The whole dish is sautéed with oregano, garlic, white wine and olive oil before it’s baked in the oven until the chicken skin is golden and crispy. Peas are sometimes added before serving to add a pop of colour.

Since this dish requires so much prep and the use of an oven, it’s not often found from street vendors, but it’s commonly available in traditional restaurants throughout the city. As well as the typical chicken-based version, many restaurants also offer other variations with different types of meat, including steak and pork.

The definitive origins of the dish are unknown, but most people believe that chicken vesuvio gained its immense popularity by being served at the Vesuvio restaurant throughout the 1930’s.

Each summer, the Taste of Chicago food festival – locally known as the Taste – is held in mid-July in Grant Park, Chicago. This foodie affair is the largest festival in the city and regularly attracts around 3-4 million visitors, each of which travels to the park for the opportunity to wander around the 70+ food stalls and pop-up restaurants, together offering a gastronomic melting pot of local and ethnic delights.

Some of the most popular dishes at this annual event include the infamous Chicago-style deep-dish pizza, Chicago hot dogs, Italian beef sandwiches, barbecued ribs, Eli’s cheesecake and the Maxwell Street Polish sausage.

If you make the dough from scratch, this recipe takes around two hours from start to finish. If you skip the dough-making process and buy pre-made Chicago-style pizza dough, you’ll be able to whip up this recipe in about an hour. The long list of ingredients and recipe steps might look intimidating at a first glance, but the recipe is fairly easy to prepare and the end result definitely makes it worth the effort.

The recipe makes one large pizza, big enough to serve four people as part of a main meal.

1. To make the dough, pour the sugar into a small bowl and pour the water on top. Stir until the sugar has dissolved
2. Sprinkle the yeast on top of the water and leave at room temperature for ten minutes to bloom. You’ll know the yeast has bloomed when it swells up and looks frothy
3. In a large bowl, stir together the white flour, semolina flour, salt and oil. When the yeast has bloomed, pour the water into the dry ingredients and carry on stirring until you have a firm and sticky dough
4. Turn the dough out onto a lightly floured surface and knead by hand for around five minutes, until it’s smooth but still tacky
5. Use a small amount of oil to grease a large bowl and place the pizza dough inside, turning it over once so all the dough is covered with oil
6. Cover the bowl with some clingfilm then cover the clingfilm with a tea towel. Leave to sit in a warm part of the house for around 60-90 minutes, or until doubled in size
7. Whilst the dough is rising, prepare the rest of the pizza toppings. Slice the sausages and remove them from their skins. Cook the meat in a frying pan over a medium heat, breaking up the sausages with a spoon or spatula until you’re left with a mince-like mixture. When the sausage is cooked, set it to one side
8. For the sauce, heat the olive oil in a saucepan over a medium heat. Add in the minced garlic and cook for 30 seconds, until fragrant
9. Add in the basil, oregano, fennel seeds, salt, black pepper, red pepper flakes and cook for a further 30 seconds, stirring all the time to make sure nothing burns
10. Pour in the chopped tomatoes, red wine and white sugar and bring the sauce to a boil over a high heat. When boiling, lower the heat to medium-low and leave to simmer for 20-30 minutes, until thickened. Return to the pan every 5-10 minutes to stir
11. When the sauce has thickened, remove it from the heat and leave to cool slightly
12. When the dough has risen, preheat the oven to 225°C and oil one 30cm deep-dish pizza pan – if you don’t have a pizza pan, you can always use a round cake tin
13. Punch the dough down in the bowl to deflate it and press it into the greased pan, pushing the dough to the edges and stretching it 5cm up the sides
14. Layer the mozzarella cheese slices over the bottom of the pizza and top with pepperoni, mushrooms, pepper rings, onion rings, black olives and the crumbled Italian sausage
15. Carefully ladle the sauce on top of the toppings, spreading it so that it falls into all the gaps and covers all the ingredients
16. Evenly sprinkle the grated parmesan cheese on top of the sauce and bake in the centre of the oven for around 30 minutes, or until the top is golden, the cheese is bubbling and the crust is golden brown
17. When fully cooked, remove from the oven and transfer to a serving plate. Slice the pizza and serve immediately whilst hot