Fuelled by luminous cityscapes and seascapes, quaint island towns, awe-inspiring national parks and iconic open roads, America’s East is all about high-octane thrills and gentle scenic meanders. So it’s little wonder, then, that most who escape to this Atlantic Ocean-backed playground want to return soon after to do it all again. Here’s our pick of the top 10 escorted tours in America, all of which are quite fabulous for those seeking hassle-free getaways complete with on-location guiding, exciting itineraries, hand-picked accommodation with selected meals, and all flights, transfers and internal travel. 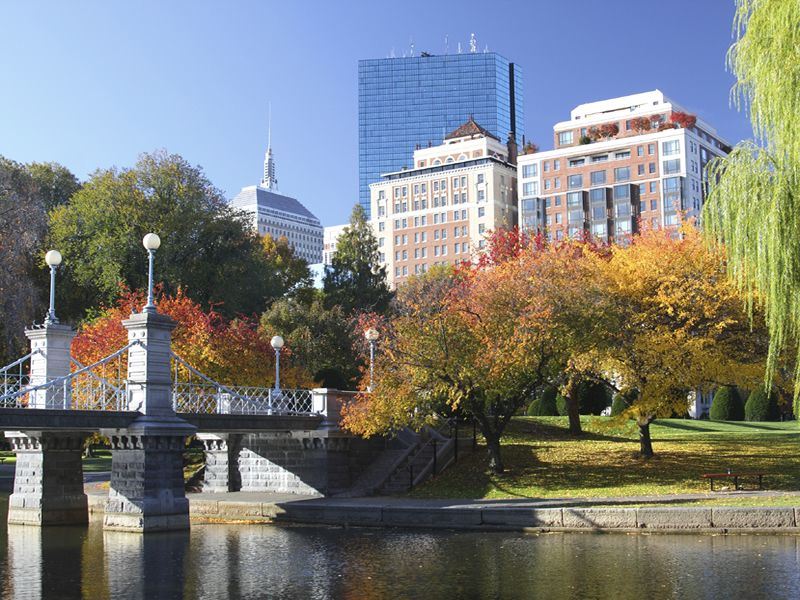 What: For a chance to get into the soul of the north-eastern states that transform into a kaleidoscope of colour in autumn, this gently-paced tour captures all that is great and good about New England’s coastline. You’ll get to stroll the cobblestone streets of Nantucket, be wowed by the Pilgrim village at Plimoth Plantation, enjoy a Massachusetts-style cranberry bog, and choose from a whale-watching cruise or sand dune adventure at Cape Cod. There’s also stylish stays in Boston, Providence, Newport, Provincetown, and Martha’s Vineyard.

More information and to book: Islands of New England 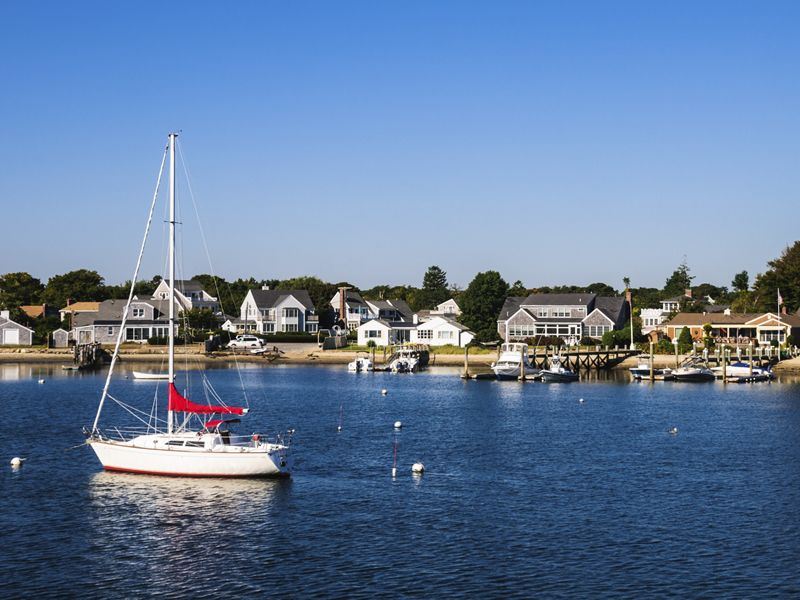 What: High-tailing it through the America’s East and Canada just got cooler on this family camping adventure. Travelling in a small group, you’ll get to pitch up at campsites in Ontario, Quebec, Vermont and the Finger Lake region, as well as canoe though Algonquin Provincial Park, cruise into the thunderous mist of Niagara Falls, and hike the Green Mountains. Equally rewarding is swimming in Smugglers Notch State Park, sightseeing in Montreal and Toronto, and shopping for cut-price designer goodies at New York’s supersized Woodbury Common Outlet.

The best bits: Bask in the outdoor enthusiast’s paradise of the Green Mountains, following trails that unearth spectacular waterfalls and discover numerous lakes to swim in. Hiking is easy around the elevated ridges en-route to Haystack Mountain where the resulting valley views are outstanding. 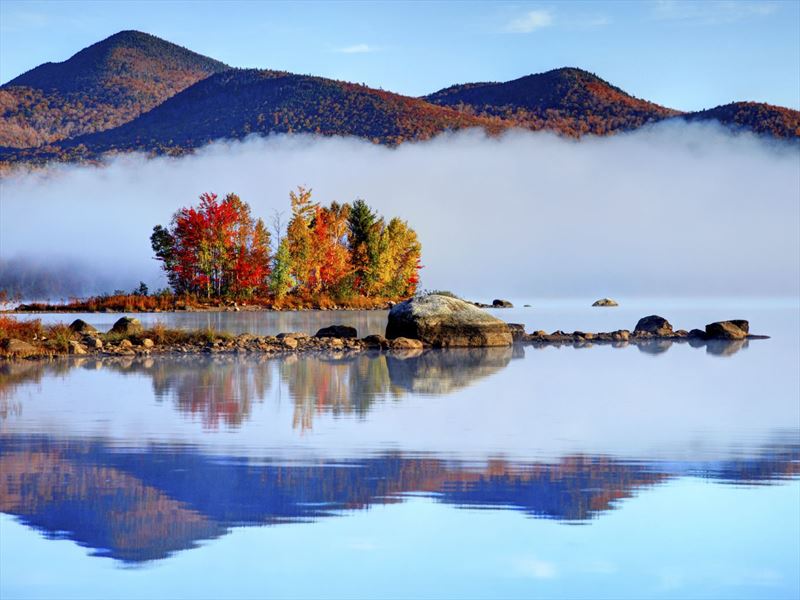 What: Setting the standard for tours worth crossing the Atlantic for, this well-priced trip assures sights that are balm to the soul. Kicking off in New York and ending in the political and power capital of Washington DC, visual treats include the mighty Niagara Falls, the shores of Lake Ontario, and the Gettysburg Civil War National Battleground. There’s also a walking tour along Boston’s Freedom Trail, a scenic journey through the countryside of Pennsylvania Dutch Country, and a fascinating visit to an Amish museum.

The best bits: Quintessential Americana awaits in Boston, the historic city known as Beantown that tempts with centuries-old buildings, world-class museums, and artsy wonders. Highlights include walking along the Freedom Trail to gaze at the Granary Burial Grounds, Old State House, Boston Common and Faneuil Hall, shopping at the downtown Quincy Market, and hitting the cobblestone streets of Beacon Hill for Federal, Greek Revival and Victorian architecture, antique shops, and historical landmarks. 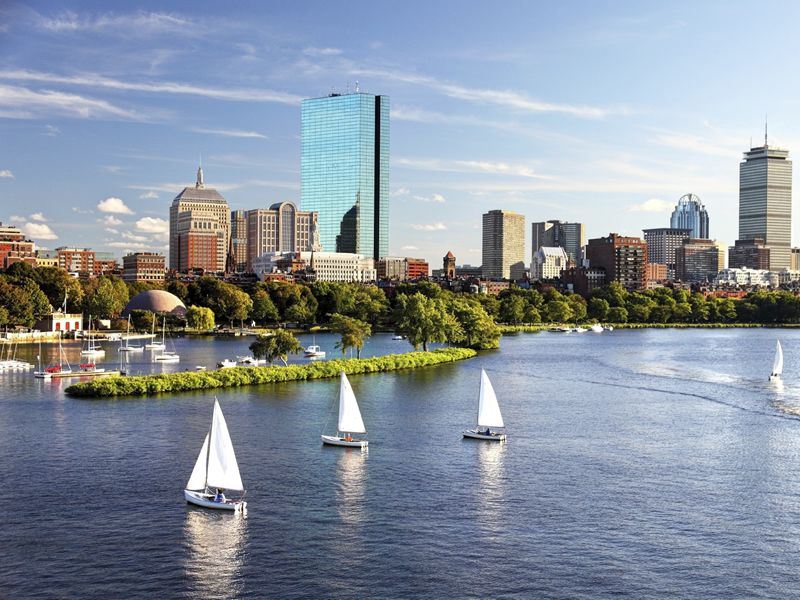 What: Just some of the best cities that make up the cultural fabric of the USA are uncovered on a tour that scores high on the sightseeing front. Following a two-night stay in New York for all the glistening skyscrapers, big-name museums and galleries, hip restaurants and high-end shopping you can muster, there’s also wine tasting in Finger Lakes Country, and visits to Niagara Falls, Amish Country and Gettysburg National Military Park. Big-city thrills in Washington DC and Philadelphia wrap things up nicely.

The best bits: Following a guided sightseeing tour of Manhattan, you’ll have plenty of time to get to grips with this big and bold city at your own pace. Walk the 1.45-mile-long High Line that stretches from the Meatpacking District through Chelsea, get your arty kicks at MOMA, Metropolitan Museum of Art and the Guggenheim, pay your respects at the  9/11 Memorial, and head to the Top of the Rock Observation Deck atop the Art Deco-style GE Building for knockout 360-degree city views. 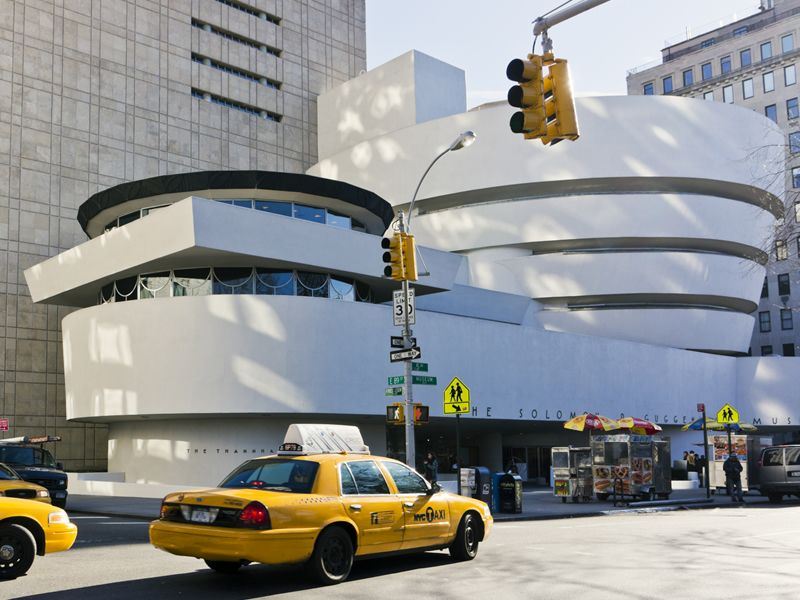 What: For a Cadillac-load of charm, an eccentric mix of musical and literary history, and drop-dead-gorgeous landscapes, the wonders of America’s South are unveiled on this outstanding tour. Beginning in New York and ending in Florida, you’ll visit Philadelphia, Washington DC, Great Smoky Mountains, Nashville, New Orleans, Pensacola, and Orlando. You’ll also encounter the bluesy heart of Memphis, journey through the Blue Ridge Mountains, and fuel any space travel fantasies at the Kennedy Space Centre.

The best bits: Set in the southwestern corner of Tennessee, Memphis more than matches its myth as home of the blues and the birthplace of rock n’roll. Enjoy a downtown tour that includes the iconic Beale Street, relive the soul and attitude of rock gods at Sun Studio on Union Avenue, and enter the wrought-iron gates of Graceland - Elvis Presley’s sublimely kitsch, bizarre, and impossibly over-the-top mansion that’s part-museum and part-shrine. 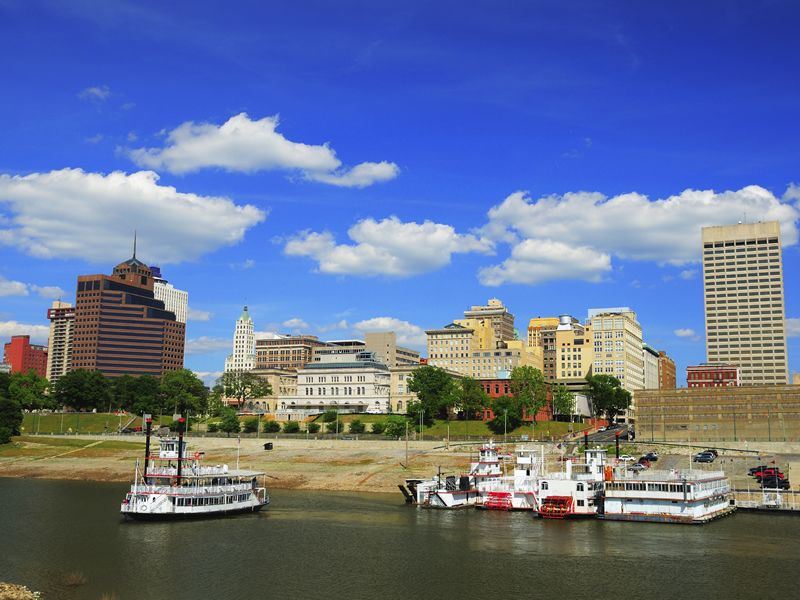 What: Raising the bar for coast-to-coast adventure, this unrivalled tour seals the deal for those who fancy mixing historic urban thrills with some of the best stretches of untouched nature. Kicking off in New York and ending in Los Angeles, you’ll get to glam it up in cities such as  Philadelphia, Washington, Salt Lake City, Chicago and Las Vegas, whilst also enjoying the eye-popping Niagara Falls, Mount Rushmore, Yellowstone and Grand Canyon National Parks, Gettysburg National Military Park, Grand Teton, Badlands, and more. You may also choose to extend your stay and travel up the Californian coast to the glittering bay city of San Francisco.

The best bits: Lauded for its Independence National Historic Park, National Constitutional Centre and swanky Rittenhouse Square, Philadelphia is enjoying somewhat of a cultural renaissance with ultra-modern galleries, upscale cafés, and state-of-the-art shopping malls. You’ll get to see all the City of Brotherly Love’s big-hitters in just one morning, including a close-up of the Liberty Bell - the 2,080-pound icon that famously cracked up, literally, on George Washington’s birthday in February 1846.

More information and to book: The Great American Crossing 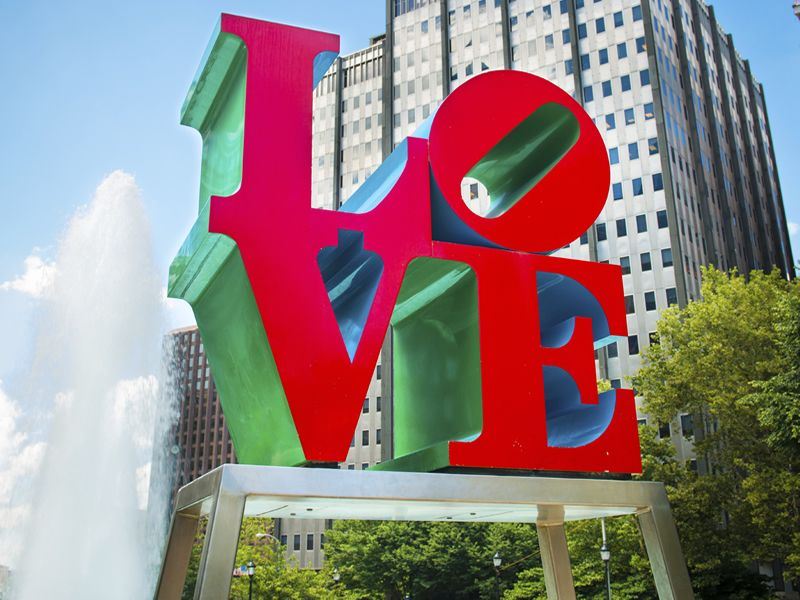 What: Whisking you off to some of the USA’s most fabled heritage cities, it’s tough to do better than this in-depth tour. Following the epic story of American democracy, standout stops include the presidential estates of Washington’s Mount Vernon and Jefferson’s Monticello, the world-famous Smithsonian museums, and Gettysburg National Military Park - the sacred battlefield dotted with combat sites such as Devil’s Den and Little Round Top. You’ll also get to visit New York City, Colonial Williamsburg, Shenandoah Valley, and more.

The best bits: For some of the USA’s most important monuments, moving memorials and free-to-enter museums, Washington DC exceeds expectations. After gazing in wonder at the Capitol Building, White House, Arlington National Cemetery and Memorial Parks, check out the Smithsonian Institution’s series of 19 museums and galleries - 11 of which are located on the National Mall. Choose to visit the Hirshhorn Museum & Sculpture Garden, Natural History Museum, American History Museum, National Air and Space Museum, National Museum of the American Indian, Renwick Gallery, or National Zoological Park.
Cost: From £1,799 per person, including flights.

More information and to book: Heritage of America 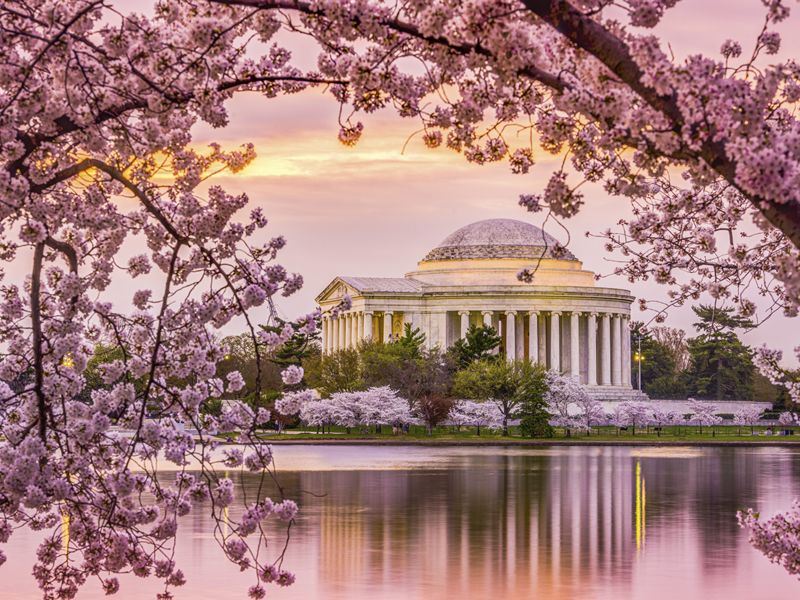 Elegance of the East Coast

What: For East Coast luxe, this Platinum-rated tour is not just about where you’ll visit, but how. There’s the Waldorf Astoria in New York City, the Langham in Boston, the Sofitel in Philadelphia, and the Fairmont in Washington - all of which are gloriously chic set-ups with everything worth seeing right on your doorstep. Further elegance comes by way of the gleaming Gilded Age mansions in Newport on Rhode Island, especially The Breakers - an elaborate Italian Renaissance-style pile built as a summer home for the Vanderbilt family.

The best bits: You’ll spend two nights at The Towers of The Waldorf Astoria - the grand dame that occupies an entire city block between Park and Lexington Avenues and 49th and 50th Streets. As the very first hotel to offer room service to guests, it’s all five-star fabulousness replete with marble floors, glittering chandeliers, plush red carpeting, and a stunning lobby dominated by a nine foot-tall bronze clock that was built by Goldsmiths' Company for the 1893 Columbian Exposition in Chicago. 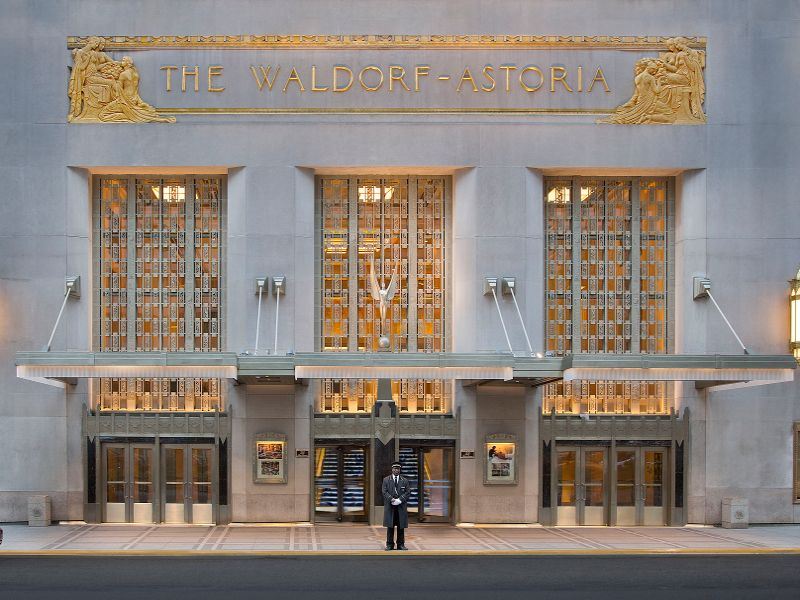 What: There’s little lovelier than leaf-peeping amid vibrant fall foliage in the most storied parts of New England. So it’s easy to see why this season-specific tour holds such appeal, mostly for the blazing blooms and changing palette of trees. Beginning and ending in Boston, there’s everything from glassblowing in Quechee to hitting Maine’s Highway 1 to drive past lighthouses and quaint fishing towns. You’ll also learn about lobster fishing at Bar Harbour, ascend the Cadillac Mountain in Acadia National Park, and visit the Ben and Jerry’s Ice Cream Factory in Vermont.

The best bits: The top of the 466-metre-high Cadillac Mountain in Acadia National Park is the very highest point along the North Atlantic seaboard - and famously the first place to view the sunrise in the US between March and October. The views are spellbinding, especially in the autumn months when the land below dazzles with a blazing mix of pinks, oranges, reds, yellows and purples. 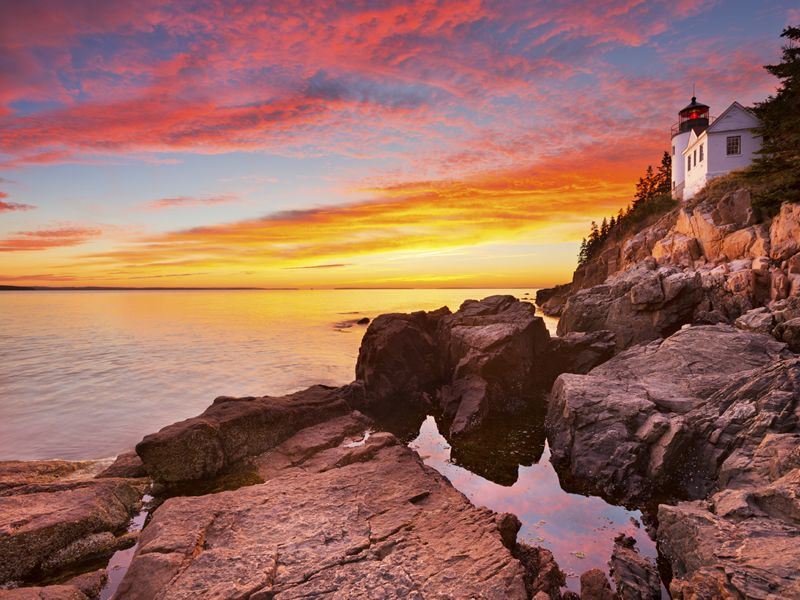 What: For window-gazing your way through some of New England most charming coastal towns and cities, this well-priced tour ranks as number one. As well as stops in Boston, Newport, Gloucester, Rockport and Salem, further treats include rural bliss in the Green Mountains of Vermont, an aerial tram ride to the top of Cannon Mountain, and the chance to book a Cape Cod whale watching cruise or sightseeing tour of Martha’s Vineyard.

The best bits: While the witchcraft trials are Salem’s biggest draw, there’s far more to this North Shore city than the haunted happenings of 1692. You’ll get to learn about the town’s literary and maritime history on a guided tour that takes in the Charter Street Burial Ground, House of the Seven Gables, Witch Dungeon Museum, and Salem Witch Museum. Don’t miss the fabled Chestnut Street - considered one of the most beautiful streets in America. 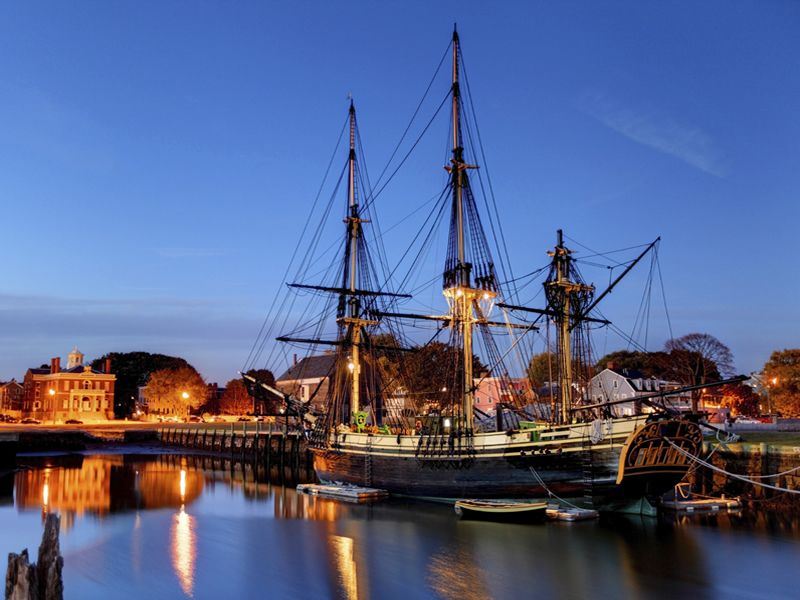 Splendors Of The West