Top 10 most terrifying places to visit in America

Complete with ghoulish dress-ups, illuminated pumpkins, spine-tingling ghost tours, and customary trick-or-treating, there’s no denying that Halloween is a huge deal in the USA. To celebrate the festival that’s seemingly been hijacked by adults in recent years, we’ve put together a freakishly fabulous list of the country’s most stomach-churning and scariest spots - all of which are open to the public and even more terrifying in real life. 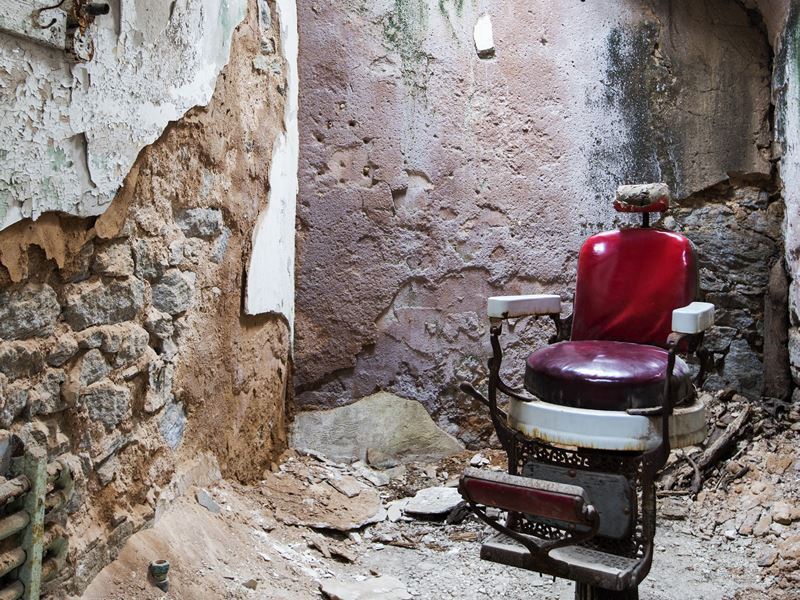 The scene: To kick scary up a notch, this disturbing macabre-like mansion was the former haunted residence of Sarah Winchester - the eccentric gun magnate widow who believed herself to be cursed. Costing around $5.5 million to build between 1884 and 1922, it comes with 160 rooms, 2,000 doors, 10,000 windows, 40 staircases, 13 bathrooms, nine kitchens, and plenty of frightful interiors. For brave souls, the 65-minute Mansion Tour includes the $25,000 Storeroom, Sarah’s Bedroom, and the Séance Room where the real-life kook came nightly to communicate with the spirits. If you can stomach it, the scarier two-hour and 15-minute Explore More Tour takes you to never-seen-before dark corridors, secret passages, and foreboding attic spaces.

Get spooked: Winchester Mystery House is offering Halloween candlelight tours for 20 nights only (running until 31 October). You’ll get to explore huge chunks of this architectural oddity and also spot how the number thirteen (Sarah’s obsession) plays such a critical role in the design and décor (nearly all of the windows contain thirteen panes of glass and even the drain covers on the sinks have thirteen holes). 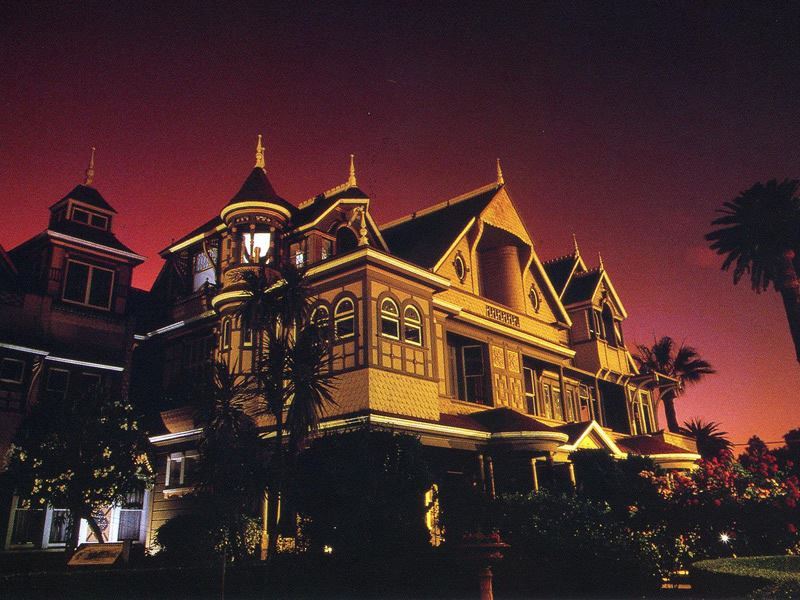 The scene: Of the three St. Louis Cemeteries in The Big Easy, Number 1 is the oldest and the most haunted. Opened in 1789 to replace St. Peter Cemetery, it holds around 100,000 of the city’s dead (their ghosts still actively roam the grounds after hours). Known as “Cities of the Dead” for its elaborate above-ground graves that resemble small houses, its most famous resident is Voodoo Queen Marie Laveau - the Creole hairdresser turned powerful priestess who died in 1881. Her resting place is the biggest draw here, especially for curious visitors who come to mark three "X’s" on her tomb in the hope she’ll grant them a wish from beyond the grave (they also leave small offerings such as candles, flowers, beads, trinkets, Voodoo dolls, and food).

Get spooked: Along with other phantoms with unfinished business, Laveau’s ghost has been seen walking between the tombs whilst mumbling a Santería Voodoo curse to trespassers. The cemetery was added to the National Register of Historic Places in 1975 and visitors may only visit if accompanied by a licensed guide. Save Our Cemeteries runs tours at 10am, 11:30am, and 1pm from Monday to Saturday, and at 10am on Sunday. Tickets must be purchased in advance. 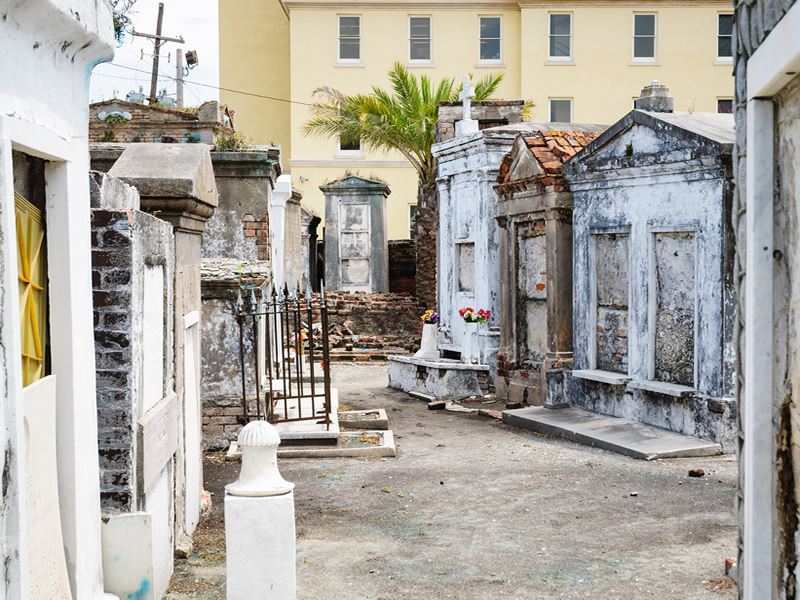 The scene: Built in 1796 by lawyer turned planter General David Bradford (nicknamed Whiskey Dave for his participation in the Pennsylvania Whiskey Rebellion), this Southern mansion ranks as the "Most Haunted House in America". Reportedly built on top of an Indian burial ground, it houses at least 12 different ghosts, and has a history riddled with tragedy (mostly deaths by murder, hanging, poisoning, gunfire, and yellow fever). Its most famous haunting is by the vengeful slave Chloe who was hung from a tree and then thrown into the Mississippi River for killing her master’s wife and two daughters with poisoned birthday cake (she’s often spotted around the plantation wearing a green turban - sometimes with the children in tow).

Get spooked: Clearly very comfortable with ghosts of residents past as well as the tinkering of piano keys, children’s voices, and strange orbs and auras, current owners John and Teeta Moss run this certifiably creepy house as a B&B. Even if you can’t get a reservation to stay in time for Halloween, you can still book a Daily Mystery Tour (available seven days a week) or an Evening Mystery Tour (Friday and Saturday nights). 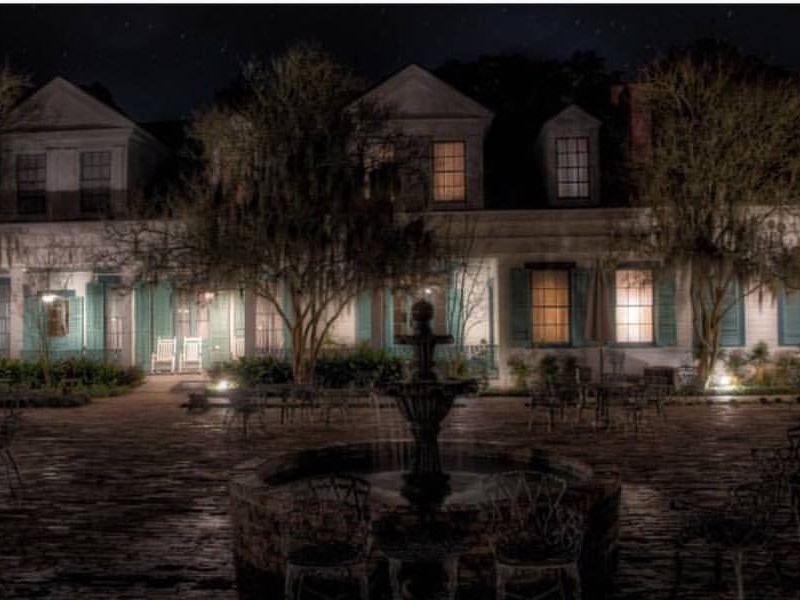 The scene: St. Augustine's oldest surviving brick structure, this 1870's striped lighthouse rising 165 feet above sea level comes with 370 hand-cut glass prisms arranged in a beehive shape, a first order Fresnel lens that still serves the beacon, and a total of 219 steps for climbing folk. It’s also home to a huge amount of paranormal activity, including several ghosts in the tower and the adjacent keeper's cottage - both of which have been the focus of numerous media investigations. Even for sceptics, there’s no denying the sounds, voices, and shadows - most notably the mischievous spirits of Hezekiah H. Pittee’s children who drowned in the ocean (lighthouse workers find locked doors mysteriously wide open and hear the sound of children’s laughter).

Get spooked: This ghoulish lighthouse runs a selection of themed events, including the Dark of the Moon Paranormal Tour that takes the very brave through the keepers' house and the lighthouse tower in complete darkness. Promising "all ghosts, no gimmicks", you’ll get to visit all the most haunted sites and have time to investigate on your own, with only a glow stick lighting your way. 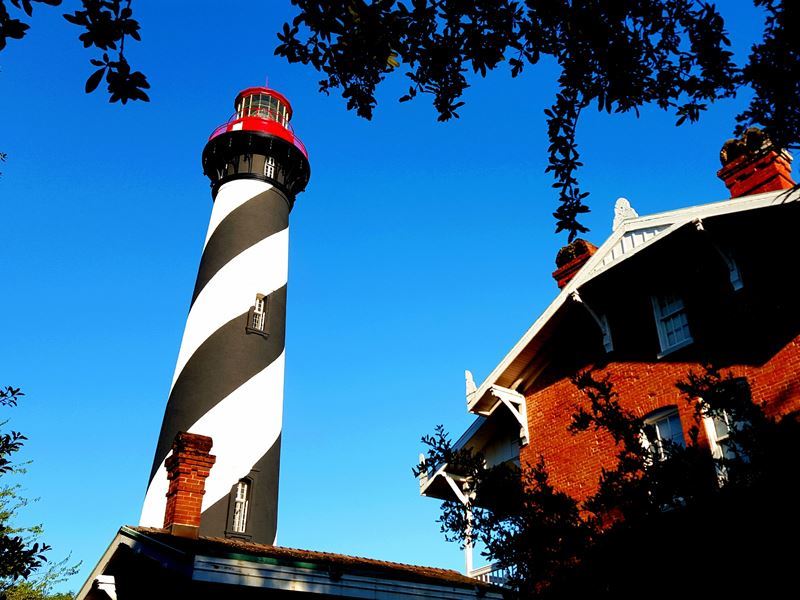 The scene: The Battle of Gettysburg was one of the bloodiest in US history, with around 50,000 deaths during the intense three-day conflict in July 1863 (it was the American Civil War’s most bloodshed in the least amount of time). For ghosthunters, the mere mention of these eerie grounds conjures up stories of phantom screams and very strange goings-on. Favoured historic stomping grounds for ghosts both in the park and the surrounding area include The Daniel Lady Farm and Baladerry Inn (both used as army field hospitals), the Gettysburg National Cemetery, Cashtown Inn, Little Round Top, Spangler's Spring, Sachs Covered Bridge, Jennie Wade House, and Devil’s Den (dozens of sightings have been reported here by visitors over the years).

Get spooked: Gettysburg Ghost Tours runs exciting bone-chilling themed walking tours, all of which are reasonably priced. Choose from the Cemetery Tour, Battlecry Tour, Scare on the Square Tour, XTREME Ghost Hunt, Live or Die Tour, and more. There’s also the ever-popular Back from the Dead Ghost Tour on Friday and Saturday nights in October, with special tours on Halloween night at 8pm and 10:30pm. 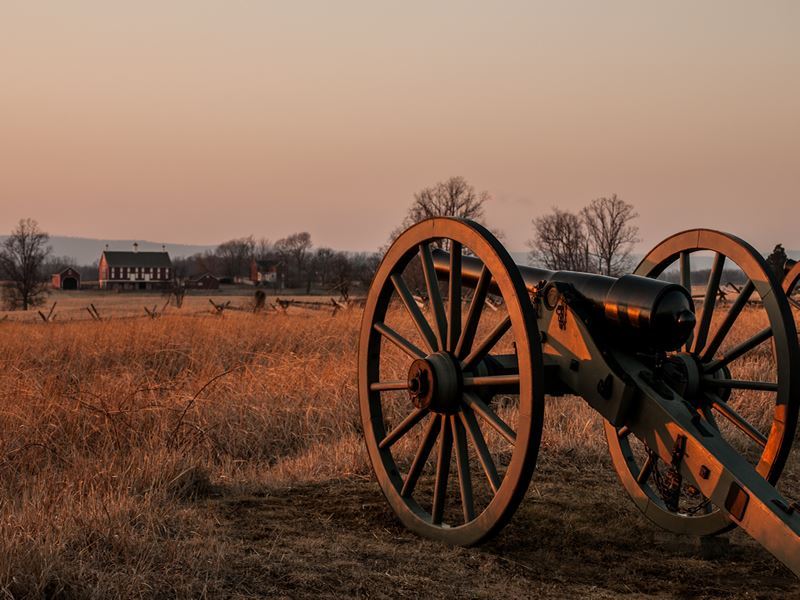 The scene: For those with a heightened sixth sense, a sleepover is very much in order at this Estes Park property that was the inspiration for Stephen King’s bestseller, The Shining (the author and his family were heading to the Rocky Mountains National Park, but forced to spend the night here because of heavy snowfall). Built in 1909 for businessman, inventor, and hotelier Freelan Oscar Stanley, it features stately Georgian architecture, stunning mountain views, and 138 guest rooms - some of which make for great ghost stories. Even if you’re unable to book the most-requested Room 217 (the hotel’s most haunted room and the one in which King famously stayed), Room 413 has enough paranormal activity to keep you awake all night.

Get spooked: The Stanley Tour and Night Spirit Tour bring the hotel’s history (and hauntings, hopefully) to life. Fans of NBO’s Deadwood heading to middle America may also fancy travelling north to South Dakota to stay at the profoundly ghoulish Bullock Hotel. Here you’ll find all sorts of strong paranormal presences in the guest rooms, hallways, and corridors, including Deadwood’s long-dead first sheriff whose apparition has been spotted on the second and third floors. 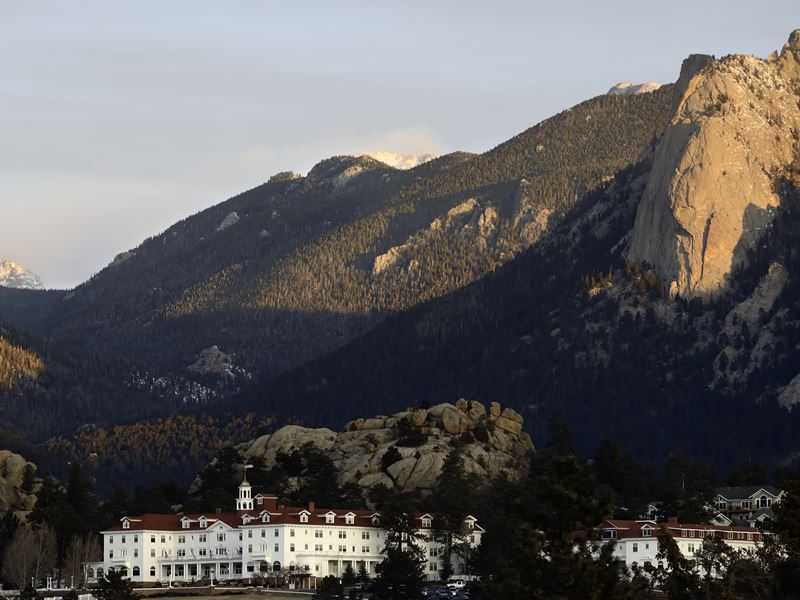 The scene: With its striking stone façade and Gothic castle-like architecture, this fabled prison housed some of history’s most violent criminals between 1876 and 1995. Modelled after the facility at Joliet in Illinois, the structure was built for 480 prisoners. But by the early 1930’s, it housed a total of 2,400 inmates (of which 85 were hung, nine electrocuted, and countess others dies from murder, suicide, and deplorable torture). The jail’s history also includes an infamous prison break in 1979, the bloody New Year’s Day riot in 1986, and an above-average amount of hot spots where paranormal activity repeatedly occurs. These include the circular entrance gate, the chapel, the shower cages, the recreation room known as the Sugar Shack, and Death Row.

Get spooked: The prison offers a selection of daily tours from April to November as well as various Halloween attractions such as Dungeon of Horrors, North Walk, and Zombie Paintball. It also offers three-hour investigations for guided tours followed by time to roam around on your own, and six-hour overnight investigations where you’ll be free to hang out with the spirits between 11:59pm and 6:00am. 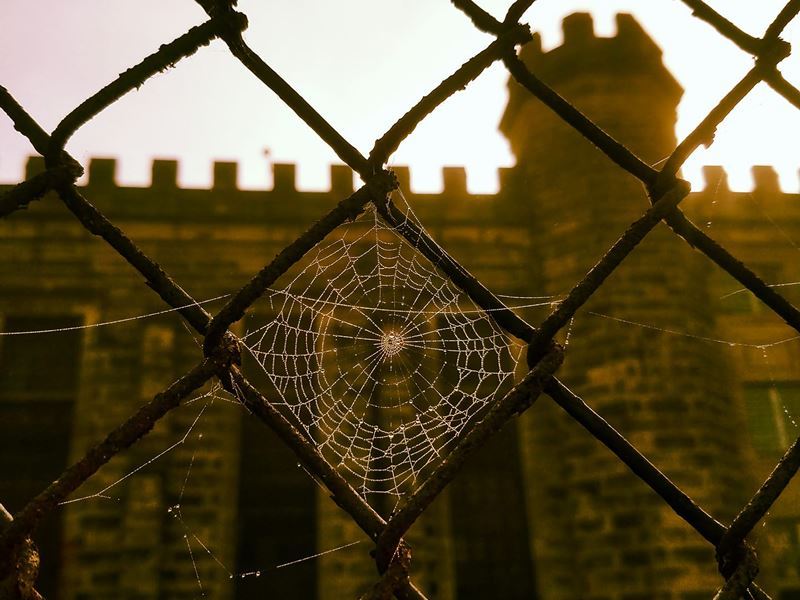 The scene: A story so famous it has its own skipping-rope rhyme, Sunday school teacher Lizzie Borden was accused of axing her father and stepmother to death in 1892 (after a headline-grabbing two week trial, it took just 90 minutes for the jury to find her not guilty). Over 120 years later, the scene of the crime continues to lure those fascinated by this media sensation and possible murderess (most intriguing was that no one else was arrested or tried and the case still remains officially unsolved). Operating as a bed and breakfast since 1996, inquisitive guests have the chance to spend the night in this hotbed of paranormal activity at 92 Second Street - and even sleep in the John Morse bedroom where Mrs. Borden was whacked to death.

Get spooked: Guided tours of this house of horror run daily from 11am until 4pm pretty much year-round (each lasts for around 50 minutes). Highlights include replicas of furniture made famous by the crime scene photos, a 19th century autopsy table, the displayed crashed skulls of the victims (also replicas, thankfully), the alleged murder weapon, Lizzie’s personal possessions and letters, and more. 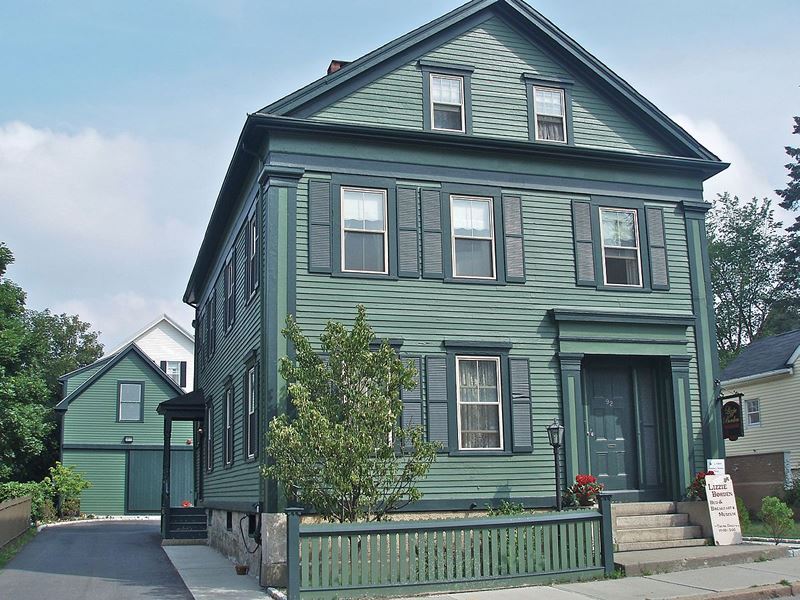 The scene: Dubbed “Hell on Earth”, this castle-like prison with its 30-foot walls is a chilling presence in Philadelphia’s Fairmount neighbourhood. Opened in 1829 as a revolutionary (and somewhat gruesome) “experiment” to reform criminals through solitary confinement, it soon became a model for prison design worldwide (around 300 prisons are based on its wagon-wheel floor plan). Abandoned in 1971 after 142 years in use, it’s famous for holding America's most notorious criminals, including bank robber Willie Sutton, who staged a breakout here in 1945, and gangster Al Capone who managed live here in (relative) luxury. It’s also one of the nation’s top-ranked haunted sites, with full-bodied apparitions of inmates spotted with sacks over their heads (an enforced rule to prevent any interaction or contact with co-criminals).

Get spooked: The guided tours lead you through the eerie halls and to the historic cells (including the very spot where Al Capone spent eight months of his year-long sentence). There’s also an annual Terror Behind the Walls tour running on select nights from September until November that includes six haunted attraction and experiences: Infirmary, Quarantine 4D, Blood Yard, Machine Shop, Break Out, and Lockdown. 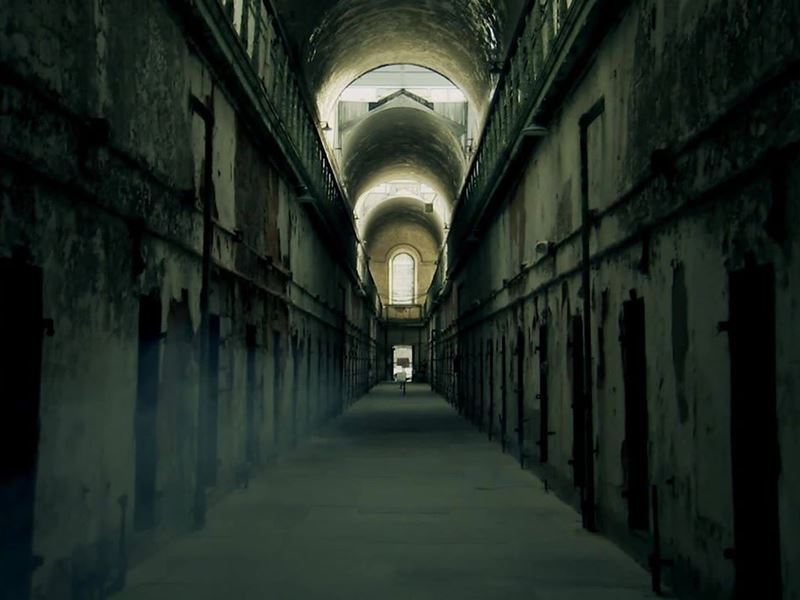 The scene: Built to house only 250 patients when it opened its doors in 1864 to “epileptics, alcoholics, drug addicts, and non-educable mental defectives”, this sprawling Gothic structure ended up with 2,400 disturbed souls in its care by the 1950's. But overcrowding aside, this was no ordinary loony bin. The 1949 investigation by The Charleston Gazette found convalescing patients locked in cages, lobotomies performed with ice picks, and torturous treatments as seclusion cells, cold-water baths, and shock therapy commonplace. Amazingly, this hellhole only closed in 1994, although the souls of some of its patients lingered longer.  It has since opened for historical and ghost tours six days a week, as well as all-night ghost hunts on Saturdays.

Get spooked: Throughout October, the asylum runs an eight-hour ghost hunt where the fearless divide their time between the Medical Centre, Forensics Building, and Geriatrics Building (pre-booking is required). There’s also the annual Asylum Ball on October 21 - a BYOB affair with costume competitions, live music, karaoke, DJ beats, and the chance to ghost hunt in groups, or alone. 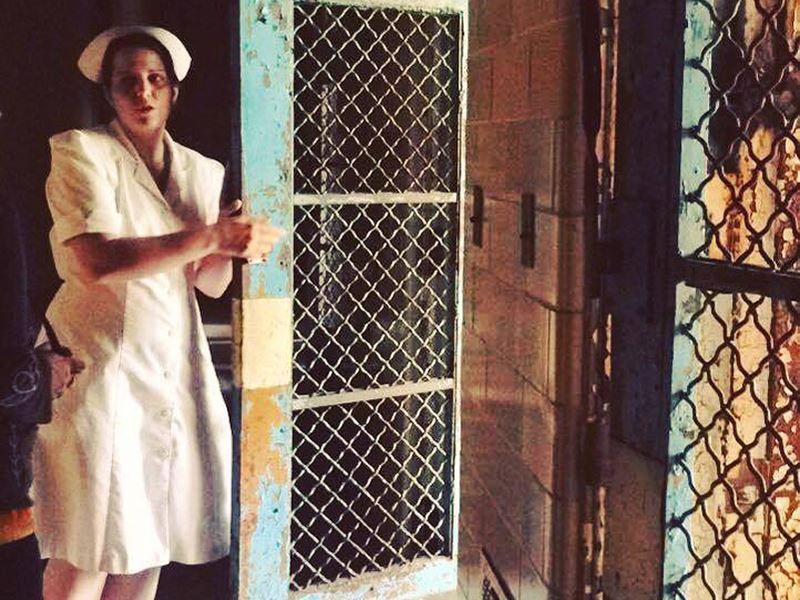 Top tip: If you’re travelling with young kids in tow, Mickey's Not-So-Scary Halloween Party held at the Magic Kingdom Park in Florida’s Walt Disney World® Resort is all about happy hauntings. Running until the start of November, this high-energy spooktacular includes grinning ghosts, Disney characters that go bump in the night, and other eerie entertainment that won’t give you (or your kids) nightmares.

The Cliffs Hotel and Spa