The Atlanta skyline at sunset
Dunleith, New Orleans and Vicksburg
Beale Street and Georgia Aquarium
Statue in Birmingham and Dexter Baptist
Rosa Parks Museum
13 nights from €1,859 per person Including Flights

Enjoy this historically rich self-drive tour through the Southern states of Tennessee, Mississippi, Alabama and Georgia over the next 13 days starting and ending in Nashville. Journey through America's important events that lead to the forming of the Civil Rights Act. You will visit an abundance of locations that impacted communities, made headlines and eventually lead to marches and protests. With a mix of museums, significant landmarks and culture - not to mention the delicious cuisine - this experience is not to be missed. (ATI) 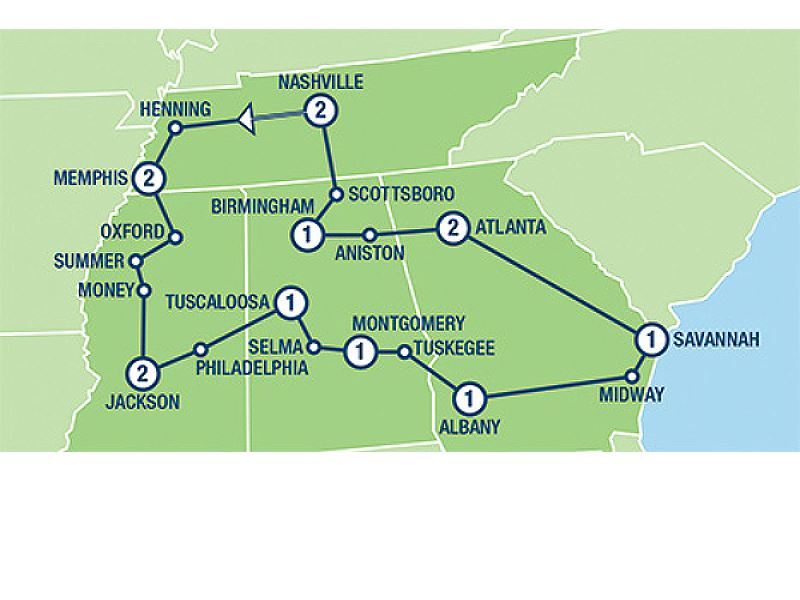 Land in Nashville and make your way independently to your hotel. Pick up your car and start your journey by heading to Woolworth on 5th, a restaurant that played an integral part with its nonviolent protests against segregated public places with sit-ins. Visit the Davidson County Courthouse before heading to Witness Walls, concrete murals depicting events, marches and Freedom Rides.

Depart Nashville towards Henning to visit the Alex Haley Museum and Interpretive Center. The museum is the childhood home of the “Roots” author and contains a life size replica of a slave ship. Drive further to reach downtown Memphis and go to Burkle Estate – known as the Slave Haven Underground Railroad Museum, once part of the Underground Railroad network, which helped people escape slavery.

Delve into civil rights history by exploring the National Civil Rights Museum. With many key moments its timeline covered including Rosa Parks, Jim Crow segregation laws, the murder of 14-year-old Emmett Till and marches in Selma, Alabama. Explore Beale Street, the heart and soul of the city’s African-American including the historic Beale Street Baptist Church. Stax Museum of American Soul Music is a must see whilst here. Why not dine on country fried steak, a catfish sandwich and turnip greens followed by sweet potato pie.

Travel south of Memphis to stop at the Oxford to see the likes of University of Mississippi and the statue of James Meredith – the first African-American student to be admitted to the university, after his racial discrimination case was supported by the U.S. Supreme Court in 1962. Next, you’ll travel to Money to see the remains of Bryant's Grocery & Meat Market – and the story of Emmett Till. Go towards Sumner to see the Tallahatchie Courthouse, where the murder trial of Emmett Till took place before reaching Jackson.

Discover a wealth of civil rights history in Jackson. Start at the Mississippi Civil Rights Museum, the NAACP field secretary's house which has been restored to Medgar Evers Home Museum, north of Jackson, visit Tougaloo College and the Greyhound bus station on Lamar Street.

Drive northeast to Philadelphia to the site of the 1964 Mississippi Burning murders which became the final push to pass the 1964 Civil Rights Act. Continue to Tuscaloosa and the University of Alabama known as the site of the "Stand in the Schoolhouse Door" incident, the university's Foster Auditorium became a National Historic Landmark in 2005.

Depart towards Selma, a movement for 1965 right-to-vote marches. A march of 600 people were met with violence from local law enforcement and vigilante gangs. A few weeks after this incident, troops protected 8,000 marchers as they set out along U.S. Route 80, arriving three days later in Montgomery, where they were greeted by over 50,000 supporters. Montgomery is home to the Dexter Avenue King Memorial Baptist Church, where Martin Luther King Jr. preached and organized the Montgomery Bus Boycott.

From Montgomery, head to Tuskegee, home of the Tuskegee Airmen, visit the Butler Chapel AME Zion Church and Tuskegee History Center. Continue southeast about two and a half hours to reach Albany, home of the Albany Movement, the first mass movement in the civil rights era to fight for the desegregation of an entire community. Also get the chance to visit the interactive exhibits at the Albany Civil Rights Institute.

As you set off towards Savannah, enjoy the beautiful Georgia countryside and stop by Midway and visit the museum at Historic Dorchester Academy. The final stop today is Savannah, home of the Ralph Mark Gilbert Civil Rights Museum. Stroll around lovely and historic Savannah, so charming with its cobblestone streets, pretty parks and squares, boutiques and trendy restaurants.

Travel inland for about 4 hours to the birthplace Martin Luther King Jr in Atlanta and his resting place at the King Center. A must see is the New Center for Civil and Human Rights including a vast variety of Martin Luther King Jr collections. Whilst you’re downtown, make sure you see the World of Coca-Cola, Georgia Aquarium and the Centennial Olympic Park.

Explore the wealth of civil rights history in Atlanta by listening to some of Martin Luther King Jr’s sermons and speeches at Ebenezer Baptist Church. At The King Center, which includes an exhibition hall and the home where Martin Luther King Jr. was born, and Fire Station No. 6. Enjoy quiet contemplation at the nearby World Peace Rose Garden and reflecting pool, home to the "Behold" monument. Visit the Eternal Flame and the crypts of King and his wife, Coretta, and explore the International Civil Rights Hall of Fame.

Depart Birmingham to Anniston and visit the site is marked with the Freedom Riders National Monument. Drive about an hour west to the next stop, Birmingham, a city at the heart of the civil rights movement, most famously Project C, better known as the Birmingham Campaign. Discover the city nestled in the gorgeous Appalachian foothills, where outdoor recreation, dining and entertainment are brimming.

Leave Birmingham for Scottsboro – around a 2 hour drive and visit the Scottsboro Boys Museum & Cultural Center in the 133-year-old former Joyce Chapel United Methodist Church. It contains documents and other artifacts that support the trial as the beginning of the civil rights movement. Your journey ends today where it began nearly two weeks ago; make the three-hour drive back to Nashville.

Return your rental car prior to your departure flight.