Begin your self-drive tour in the exciting city of Chicago, stopping in Indianapolis before exploring Louisville, the Gateway to the South and the home of the world famous Kentucky Derby. You’ll get your fill of country music in Nashville, tour Elvis’ elegant Graceland in Memphis, and visit Civil War battlefields and grand plantation homes on your journey to New Orleans, the final destination, legendary for jazz and incredible Creole cuisine. (TM) 612833 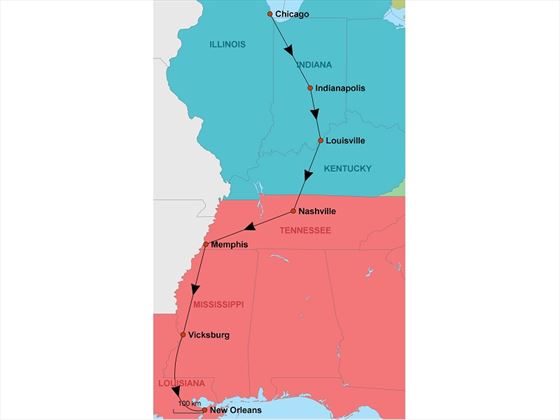 Arrive into Chicago and enjoy an evening of relaxation. You might take a stroll on the scenic Lakefront trail or enjoy the breathtaking views of Lake Michigan and the city skyline from the 360 Observation Deck at the John Hancock Building, located 1000 feet above the famed Magnificent Mile, just steps from your hotel. Your second day in the Windy City brings the opportunity to take in the skyline from the very best vantage point on an architectural river cruise, where you’ll marvel at the internationally renowned buildings like the Aon Center, the Wrigley Building and the John Hancock Center. In the historic Oak Park neighbourhood, tour the Frank Lloyd Wright Home and Studio on a guided walking tour, and visit Ernest Hemingway sites, including the author’s birthplace and museum.

The next leg of your journey will bring you to Indianapolis. Visit Fountain Square, just southeast of downtown, known for its funky vibe, vibrant arts scene, one-of-a-kind shops that sell everything from comics and musical instruments to gourmet fare, fashion and flowers, as well as a host of independent eateries, live music and performances. Cap off your day by dining in the hip, historic Wholesale District in the heart of downtown Indy, known for the finest eats in the city.

A 114-mile drive will bring you to Kentucky’s largest city, known historically as the “Gateway to the South.” Visit Churchill Downs, home of the famous Kentucky Derby, one of the longest continually running sporting events in America. If you aren’t able to catch a race, take a behind-the-scenes walking tour, which includes exploring many of the most exclusive areas of the racetrack, like Millionaires Row and the Matt Winn Dining Room. On the Urban Bourbon Trail, you’ll tour and taste some 50 to 150 varieties of the state’s signature spirit poured by some of Louisville’s best bartenders. Baseball fans should be sure to allow some time to visit the Louisville Slugger Museum & Factor to watch bat making demonstrations and take a guided factory tour.

Moving onto Nashville, AKA Music City, your next two days will be filled with all sorts of tunes and the stars that sing them. Visit the Country Music Hall of Fame, which features a museum known as the “Smithsonian of country music” due to its unrivalled collection as well as the oldest surviving recording studio, where landmark recordings by Elvis Presley, Dolly Parton, Waylon Jennings, and many others were made. You’ll also want to attend a live recording at Ryman Auditorium, one of the most historic music venues in the city, and squeeze in a visit to the Grand Ole Oprey, where you can catch a country music and variety radio show that’s still recorded live. After dark, explore the legendary honky-tonks along Broadway and 2nd Avenue, including Robert’s Western World, Layla’s and the four-story Honky Tonk Central.

As you make your way to the next destination, Memphis, stop at Belle Meade Plantation, just outside of Nashville to tour the historic Greek Revival mansion that sits on the sprawling 5,400-acre estate and thoroughbred horse farm. When you reach The River City, discover its heart and soul by exploring Beale Street, the spot where the blues were birthed, and many famed musicians got their start, including B.B. King. During the day, savour tasty BBQ and browse the many music memorabilia stores, and at night, join the party at one of the many live music clubs that line the street.

On day two, browse the Memphis Rock ‘n’ Soul Museum, a Smithsonian Institution affiliate which provides a comprehensive Memphis music experience that includes seven galleries featuring more than 30 instruments, 40 costumes and 100 songs. The man who will always be most closely linked to Memphis is Elvis Presley, who recorded at Sun Studio and built his extravagant home, Graceland, here, which means touring it is truly a must. You’ll see the King’s legendary jungle room, record collection, pink Cadillac, and even the gifts sent to him from his most passionate fans. If you have time, visit the Stax Museum, which chronicles the history of the iconic Sun Studio label, located right in its former home.

Today you’ll travel to Vicksburg, the site of the Vicksburg National Military Park which commemorates the Battle of Vicksburg, a 47-day siege that was pivotal to the Civil War. View the battlefield and more than 1,300 historical documents and markers, as well as the national cemetery that serves as the resting place for over 18,000 – two-thirds are unidentified.

Travel through plantation country to your final destination, New Orleans. Take time to tour some of the grand plantation homes along the Mississippi River, as the well as the Windsor Ruins in Port Gibson, the site of the remains of the largest antebellum Greek Revival home ever built in the state.
Wake up in New Orleans and get ready to explore this city that’s renowned for its amazing cuisine, jazz, and charming cobblestone streets. Tour the French Quarter, including its French Market, the oldest public market in the country, as well as the Garden District, an uptown neighbourhood home to the wealthy and famous. The historic, revitalised Arts District is also worth a look with its many museums, art galleries and fine restaurants. Afterward, enjoy a paddlewheeler dinner cruise on the mighty Mississippi.

End your adventure by enjoying a traditional Louisiana Creole Jazz brunch. While there are a number of places to choose from, the Commander’s Palace in the Garden District serves the original Jazz brunch with outdoor patio dining.