This is a great twin centre of two contrasting American cities. It’s just a short flight to New York and an easy train ride to Philadelphia.  If you’re new to New York then make sure you ascend the Empire State Building, stroll Central Park and take a boat trip to see the Statue of Liberty. There are bars, restaurants and cafes to suit everyone, the city layout makes it easy to navigate and the atmosphere and attractions make this a very compelling city. After you exertions, you’ll be glad of the train ride to Philadelphia to catch your breath, but it’s less than one and half hours, just enough time for a power nap. Once you arrive into 30th Street Station Philadelphia you can drop your bags at your chosen hotel then get out exploring.

Philadelphia is well known for its cultural heritage, with majestic architecture, cobbled streets and fascinating museums. One landmark you may recognise is the Philadelphia Museum of Art, whose steps were used for Sylvester Stallone’s victory run in ‘Rocky’. Whilst New York has undoubtably great shopping, you may want to save your dollars for your time in Philadelphia which offers tax-free shopping on clothes and shoes. You'll find all the big name brands as well as countless independent boutiques throughout each of the city's diverse neighbourhoods. The dining scene in Philadelphia has a well-deserved reputation, ranging from award winning dining experiences to cosy neighbourhood family-run eateries. the city also boasts Terminal Marketing - one of the largest and oldest public markets in America. Here you'll find more than 80 independent merchants including 26 restaurants - a must-visit for foodies looking to sample a taste of Philadelphia, including their renowned cheesesteaks.

Arrive in New York and transfer independently to your hotel for a three night stay at the Fitzpatrick Grand Central or similar. We can tailormade this holiday to have different hotels and different durations in either city.

Enjoy an exciting couple of days exploring all the sights of New York.

Transfer independently to New York Penn Station and board the Amtrak train to Philadelphia. Journey time is around an hour and a half. Transfer independently to your chosen hotel to check in.  This package includes a three night stay at the Holiday Inn Express Philadelphia Midtown Hotel, but we are happy to advise you on other hotels in the city such as the charming Kimpton Hotel Monaco Philadelphia or historic The Warwick Hotel Rittenhouse Square.

Enjoy two full days in America’s first World Heritage City. Philadelphia has 67 National Historical Landmarks in its historic square mile, so its really easy to see the unique and fascinating sights. Tour Independence Hall, where the Declaration of Independence and United States Constitution were debated and adopted. See the Liberty Bell, the symbol of American independence that was once located in the steeple of Independence Hall. Stroll Elfreth’s Alley, the oldest continuously inhabited residential street in America for a great photo opportunity. 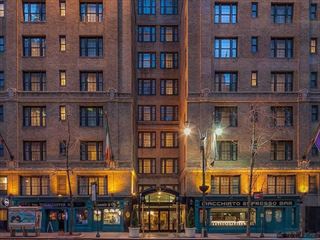 A central location and warm Irish hospitality combines to make this a great choice for a New York hotel. Couples and families will enjoy the traditional comfort of the guest rooms, and the convenient & convivial hotel restaurant & pub. 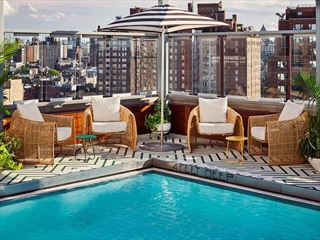 Gansevoort Meatpacking NYC is a stylish and chic hotel sitting in the popular Meatpacking district of Manhattan with its unique boutiques, fun bars and buzzing restaurants, just a stroll away from the iconic High Line. 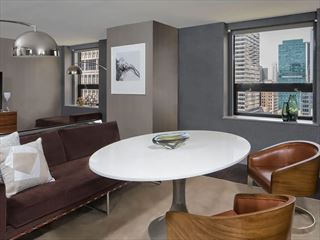 The Grand Hyatt New York is a sleek, sophisticated hotel right in the heart of Manhattan, with a great choice of guestrooms and suites. Perhaps upgrade to the "View" room giving you an unbeatable view over Manhattan’s 42nd Street skyline 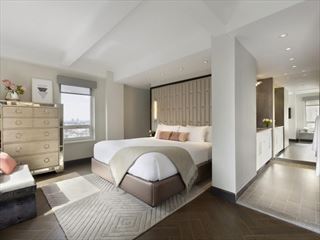 Built in 1931 in the grand Art Deco style this hotel is located in the heart of the historic theatre district and steps away from the lights and activity of Times Square. 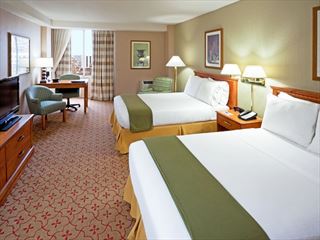 This hotel is in a great location for families and couples to enjoy the best that Philadelphia has to offer, in the heart of the historical downtown, and a short walk to South Street, the Italian Market and the Liberty Bell. Featuring an outdoor pool and with breakfast included in the rate, this hotel is a good value option for this city. 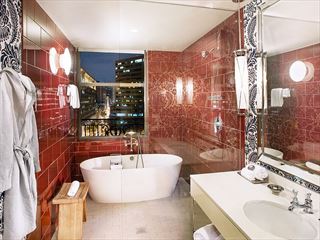 One of the most romantic properties in the City of Brotherly Love, this charming property aims to make your stay a memorable one. 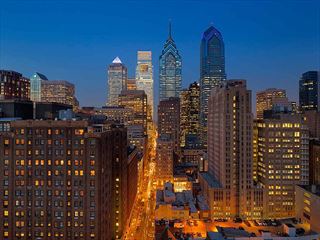 This elegant city hotel enjoys an ideal location in the prestigious Rittenhouse Square district, in the centre of Philadelphia. Just footsteps from over a 100 bars, restaurants and boutiques.