Double the fun: Combining your Orlando stay with a trip to the coast

For big-ticket theme parks, over-the-top attractions and a celebration of childhood that sucks you in like nowhere else on the planet, Orlando lures over 60 million wide-eyed visitors every year. But while this rite of passage for grown-ups and their offspring promises super-cool fun on a huge scale, a stay here is extremely tiring - especially if you’re charging around the city at top speed trying to see and do everything in one single trip.

With this in mind, we’re spearheading the trend of double-duty holidays by combining a stay in Florida’s theme park capital with a trip to one of the state’s coastal cities. Not only does this combo get you more bang for your buck, but you’d have earned your right to relax once you’ve exhausted your toddlers at the Magic Kingdom and Universal's Islands of Adventure - or appeased your teens by taking them to see the Space Shuttle Atlantis exhibit at the Kennedy Space Center. 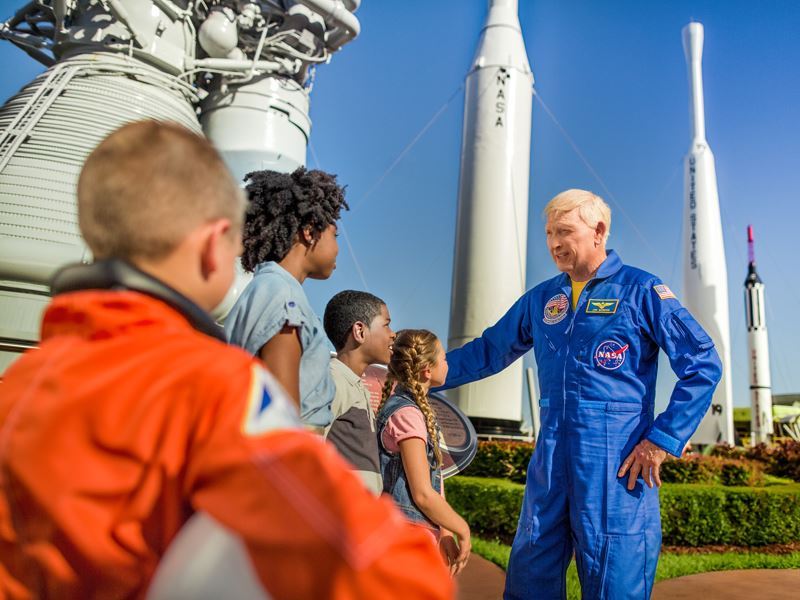 And while we’re focussing on the superbly-priced dual packages that incorporate beach glamour in Miami, Clearwater and Naples, we can tailor-make holidays that pair Orlando with any beach destination of your choice. Here’s how you can enjoy two very different holidays back-to-back.

Orlando plus beach bliss in Miami
Headline-grabbing rides meet high-end beach glamour on our seven-night Self-Drive Fun & Sun Trail where you’ll get to kick off in Orlando and overload on eye-popping attractions such as Walt Disney World, Disney’s Hollywood Studios, Magic Kingdom, Epcot, Animal Kingdom, Universal Studios, LEGOLAND Florida, and more. You’ll also get to stay in Fort Myers, and later enjoy achingly hip beachlife in Miami. Prices start from just £839 per person and include return international flights with Virgin Atlantic, hotel accommodation, car hire with fully-inclusive insurance, and a boat cruise along the Caloosahatchee River. 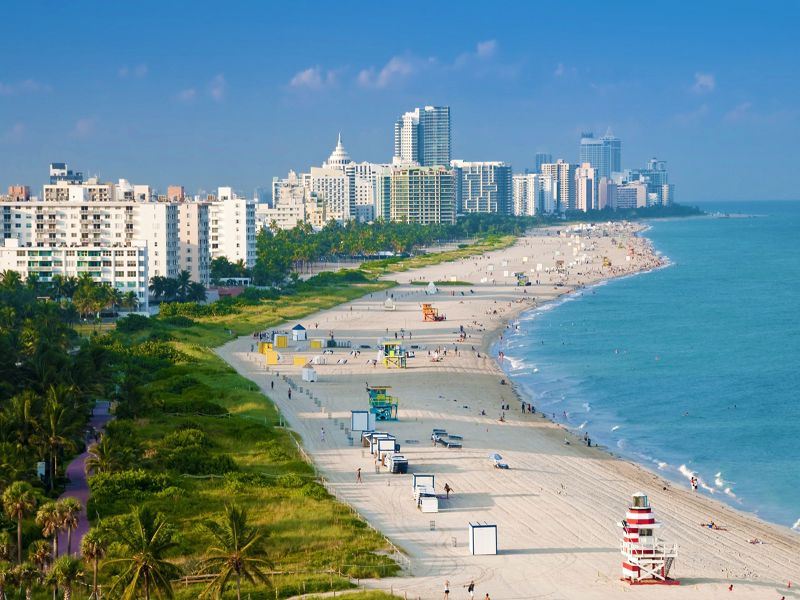 The best bits: Pretty much Baywatch with a 1930’s backdrop, Miami’s showstopper is South Beach - the see-and-be-seen place for bikini-clad beachgoers, models posing for photoshoots, and well-oiled lifeguards hanging out in their Art Deco watchtowers. Life here is all about the swathes of sugar-white sands, turquoise-tinted waters, and waving palm trees. Add to the mix trendy restaurants with menus as playful as the décor, fancy cocktail bars and sidewalk cafés, neon nightlife, designer boutiques, and 800 whimsical Art Deco buildings dating back to the 1920’s and 1930’s, and it’s a beach scene like no other. The must-see here is the world-famous Ocean Drive, especially the 10-block stretch from 5th to 15th streets where the beach is gorgeously white and wide. Away from the sands, Miami highlights include visiting the Institute of Contemporary Art, draining your wallet at Bal Harbour Shops, Aventura Mall and the Lincoln Road Mall, experiencing a taste of Cuba in Little Havana, and delighting the kids at the cageless Zoo Miami that features 300 acres of exhibits resembling the animals' natural habitats. 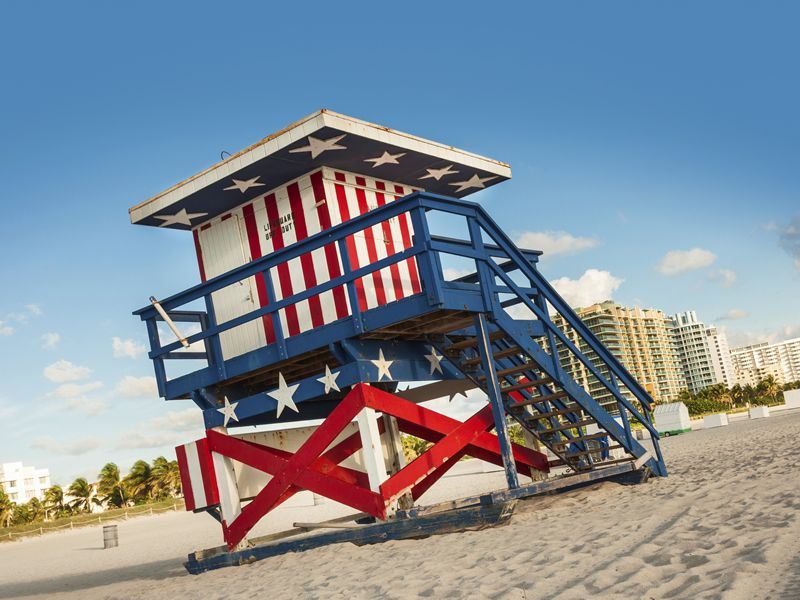 Orlando plus beach bliss in Clearwater
Following seven nights of adrenalin-charged fun in Orlando where you can choose to overdo it at Disney, shop yourself silly, play unlimited golf, and check out the city’s top-notch museums and galleries, you’ll get to hit the award-winning beaches of Clearwater on this cleverly-crafted 10-night Orlando & Clearwater Twin Centre holiday. Prices start from just £899 per person and include international return flights to Orlando and from Tampa, seven nights in Orlando with three-star accommodation, three nights in Clearwater with four-star accommodation, and car hire with fully-inclusive insurance for the duration. 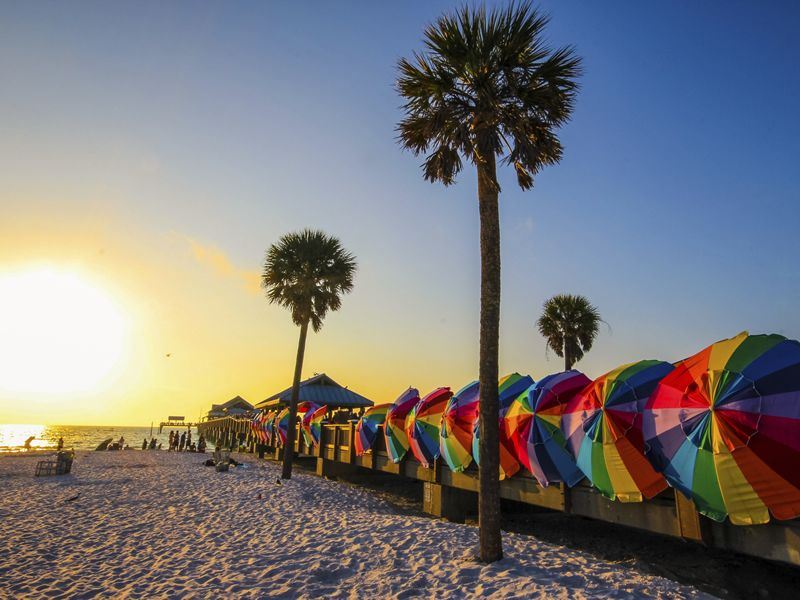 The best bits: Just a 90-minute drive from Orlando, the beach city of Clearwater on the Gulf of Mexico raises the bar for beach stays for its expansive pristine white sands backed by crystal-clear waters. The most celebrated spot in town is Clearwater Beach - a three-mile stretch that’s continually ranked as one of America’s Top Family Beaches for its dizzying array of watersports as well as sun-lounging, swimming and sandcastle-building potential. But there are plenty of diversions to lure you away from the gorgeous sands; mostly the Pier 60 Park that’s smack bang in the middle of the beach and accessible from the Beach Walk promenade. Aim to arrive here a couple of hours before the sun sets when the place gears up for the rather magical Sunsets at Pier 60 Daily Festival - a nightly ritual that packs in artists, crafters, street performers and musicians. Equally worthy of your attention is the famous Dolphin Landings for dolphin-spotting tours, the two-hour Captain Memo’s Pirate Cruise for swashbuckling adventures, and the Clearwater Aquarium for a glimpse of Winter - the brave Atlantic bottlenose dolphin with a prosthetic tail who was the inspiration for the movies Dolphin Tale 1 & 2. 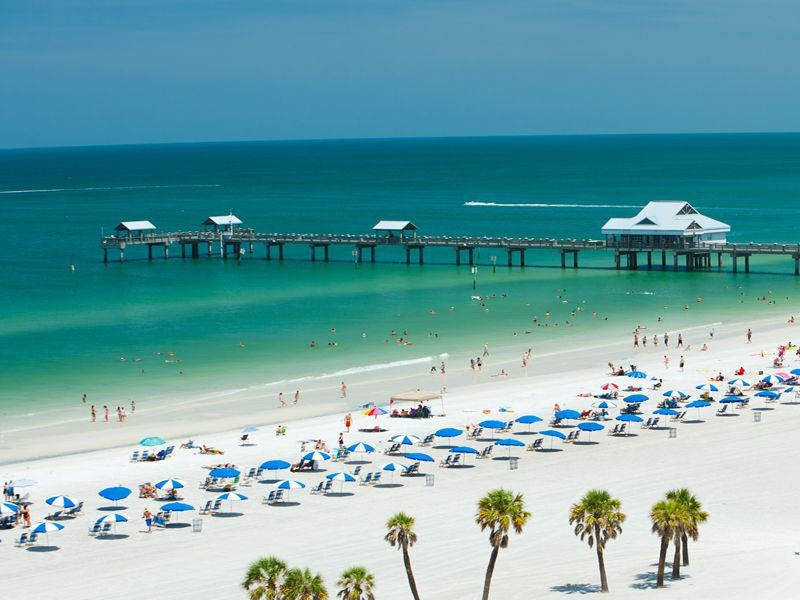 Orlando plus beach bliss in Naples
After a luxurious seven-night stint in Orlando, you’ll be more than ready for some seriously stylish beach chill-out in the sophisticated city of Naples on our 10-night Orlando & Naples Twin Centre holiday. Prices start from just £1,049 per person and include international return flights, seven nights in Orlando with five-star accommodation, three nights in Naples with four-and-a-half-star accommodation, and car hire with fully-inclusive insurance for the duration. The drive between Orlando and Naples takes around four hours. 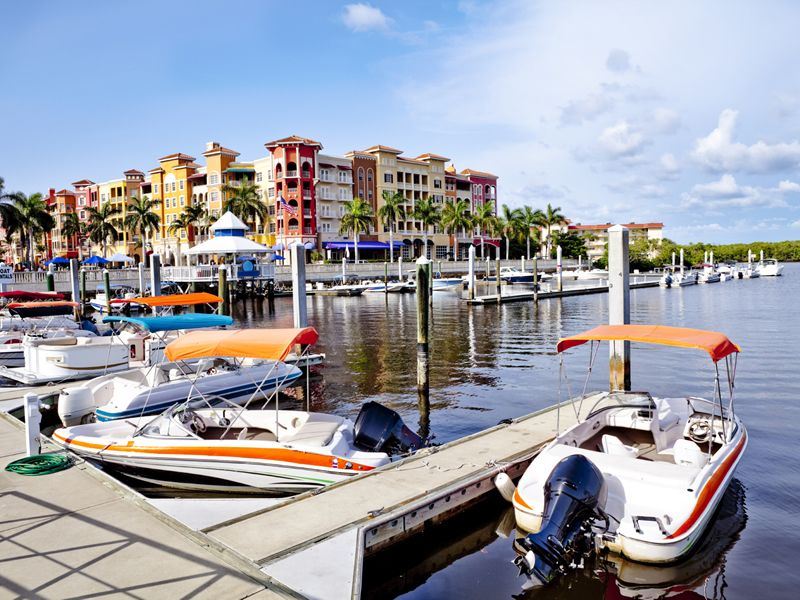 The best bits: For a slice of coastal chic that’s worlds away from the cosmopolitan bustle of Orlando, the Gulf Coast city of Naples is all about shopping, world-class golf courses, and cocktails at sunset. But it’s the pristine white beaches that really wow, especially Lowdermilk Park that’s close to the downtown area and has the best facilities for families with children. There’s also the Naples Municipal Beach and Pier for its six miles of flawless white sand and aquamarine waters, Barefoot Beach Preserve Park for its tropical hammocks and butterfly garden, and Delnor-Wiggins Pass State Park for its fabulously clear waters. Further city highlights include the permanent collections at Baker Museum, the colourful Children’s Garden at Naples Botanical Garden, the spectacular wildlife at Naples Zoo at Caribbean Gardens, and the watery attractions at Sun-N-Fun Lagoon Water Park. On the shopping front, no trip to Naples is complete without a spree at the fashion boutiques, jewellery stores, art galleries and gourmet eateries in the chic area known as Third Street South. Should time allow, it’s also worth checking out the upscale Waterside Shops mall that’s around a 10-minute drive north on the Tamiami Trail from central Naples. 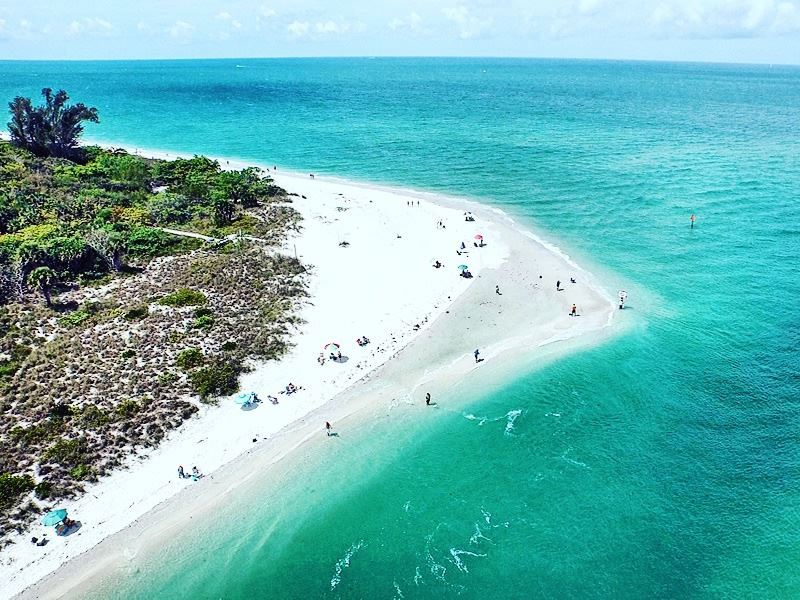 Getting there: All the fun of flying
For flights just around the nine-hour mark, Virgin Atlantic goes the extra (air) mile by laying on the plushest service and swankiest of perks for both parents and children, especially those flying Premium Economy. With a focus on all-out comfort, passengers travelling to and from Orlando International Airport can look forward to the slickest of airport experiences; from dedicated check-ins and bag drops to priority boarding. Luxurious touches include roomy leather seats with above-average legroom, elbow space and headspace, as well as in-seat power to keep gadgets going during the flight, and a dark grey and silver-lined amenity kits filled with purple socks, purple eye mask, designer toothbrush and paste, pen, and earplugs.

And it’s not bad on the dining front either. Expect a welcome glass of bubbly, complimentary newspaper, and afternoon tea with finger sandwiches. With a heavy focus on traditionally British fare, the main meal comes with a starter, oven-baked roll, choice of three mains (including a vegetarian option), pudding, either red or white wine, and an after-dinner liqueur to follow tea or coffee. Best of all, everything is served on china plates with stainless steel cutlery and linen napkins. There’s also a separate kids’ menu designed by TV cook Lorraine Pascale for passengers aged 12 months to 12 years. Sample dishes include Marvellous Mac’n’Cheese with Pancetta Pieces, Crispy Tender Chicken Strips with Potato Wedges & Crushed Peas, Sweet & Sour Pork Balls with Sunshine Rice, and Mum’s Chilli Con Carne with Calypso Rice. Baby meals that include pureed or bottled foods are also available.

As long-haul flights can get boring rather quickly, all passengers have access to Vera - the in-flight touchscreen entertainment that’s active from before take-off right up until you step off the plane. Approximately 3,000 hours of programming is available at the push of a button; expect award-winning TV comedies, dramas and documentaries, up-to-date blockbusters and indie movies, and audio channels for a cross-section of music genres. Younger kids can sit quietly glued to Disney Channel until they dose off, while tech-savvy teenagers can spend hours gaming or messaging each other on the Seat Chat app.