Complete with epic natural wonders, endless ski runs, gurgling geothermal waters, and historic towns with echoes of the Old West, Colorado is the outdoorsy mountain state that draws in urbanites, seasoned adrenalin-lovers, and have-a-go adventurers. We discover the best things to do in a place where being at a high altitude just makes things more fun. 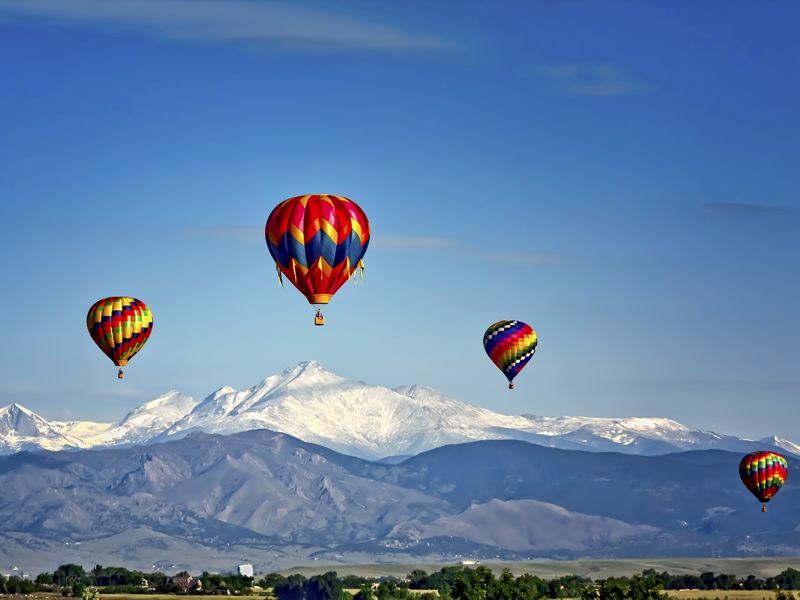 Join (or lose) the crowds at Red Rocks Park & Amphitheatre

What: Given its near-perfect acoustics, it’s easy to see why this 9.000-seater amphitheatre set in a transitional zone where the Great Plains meets the Rocky Mountains is hailed as one of the best live music venues on the planet. As the undeniable superstar of Red Rocks Park, it sits at 6,450-feet above sea level and comes with two massive monoliths - Creation Rock and Ship Rock - that control the incredible sound. Big-name acts that have performed here include The Beatles (1964), The Jimi Hendrix Experience (1968), Jethro Tull (1971) Bruce Springsteen (1978), The Grateful Dead (1978), U2 (1983), Radiohead (2003), and Daft Punk (2007).

Highlights: While the star-studded concerts get all the love at this awesome park, there’s also plenty of first-rate attractions. Most fabulous are the hiking and biking trails for journeying through the sculpted rocks, the visitor’s centre for watching free "best of" Red Rocks concert footage, and the Colorado Music Hall of Fame for its excellent interactive displays that showcase the state’s diverse musical history. 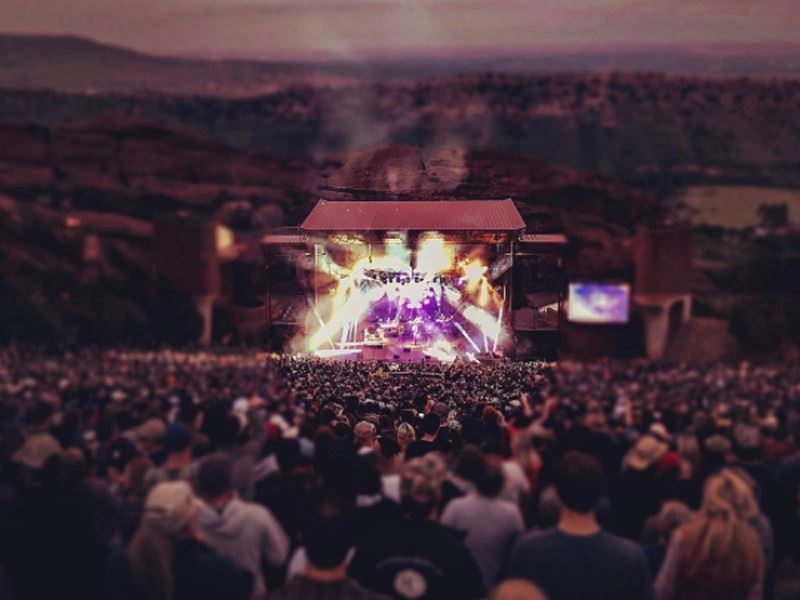 What: Gold fever roared through Colorado in the late 1800s, sparking instant towns for the thousands of starry-eyed workers swayed by the promises of riches. Many of these (Leadville, Idaho Springs, Breckenridge) remain some of the state’s top destinations, while the abandoned others simply became eerily atmospheric ghost towns. Some of the best-preserved deserted places for a spine-chillingly cool wander include Independence for its stables, general store and intern cabin (now the summer home of Aspen Historical Society), Ashcroft for its jail and a couple of saloons, and Tomboy for its interesting mining remnants and iconic “Social Tunnel”.

Highlights: Easily one of Colorado’s most-visited ghost towns, St. Elmo is where you’ll find a dusty main street, wooden storefronts, an old saloon store, and several private homes. Once you’re done with the John Wayne-like set-up here, head to the nearby town of Tin Cup to see the famous 1880’s cemetery that’s contains unmarked graves filled with rough-and-tumblers who were killed violently over horse sales, card games, and wages disputes. 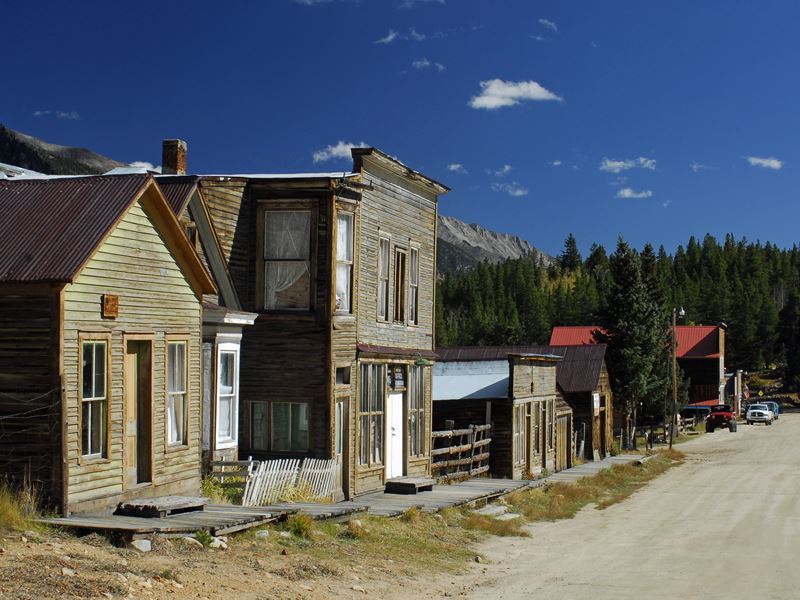 Relax and rejuvenate at one of the mineral hot springs

What: Ranking second only to the Rocky Mountain peaks, the state’s gurgling geothermal waters are big business. And there’s plenty to choose from; from sizzling privately-owned baths to all-singing-all-dancing spa resorts with soaking pools and treatments galore. Among the best of these water playgrounds are Glenwood Springs for its staggeringly huge 400-feet-long main pool (kept at a balmy 90-degrees), therapy pool and sandstone bathhouse-turned-spa, and Steamboat Old Town Hot Springs for its eight-lane lap pool, excellent fitness centre, waterslides, and a handful of hot pools that you can happily wade in for hours.

Highlights: For blissing out in mineral-rich waters of up to 104-degrees, little beats Strawberry Park Hot Springs. Set in a high mountain valley just seven miles north of Steamboat, it comes with unique stone-lined soaking pools, a selection of feel-good treatments (massage, Watsu therapy), and no-frills overnight accommodation in rustic cabins, tents, or covered wagons. The springs open until midnight on Fridays and Saturdays. 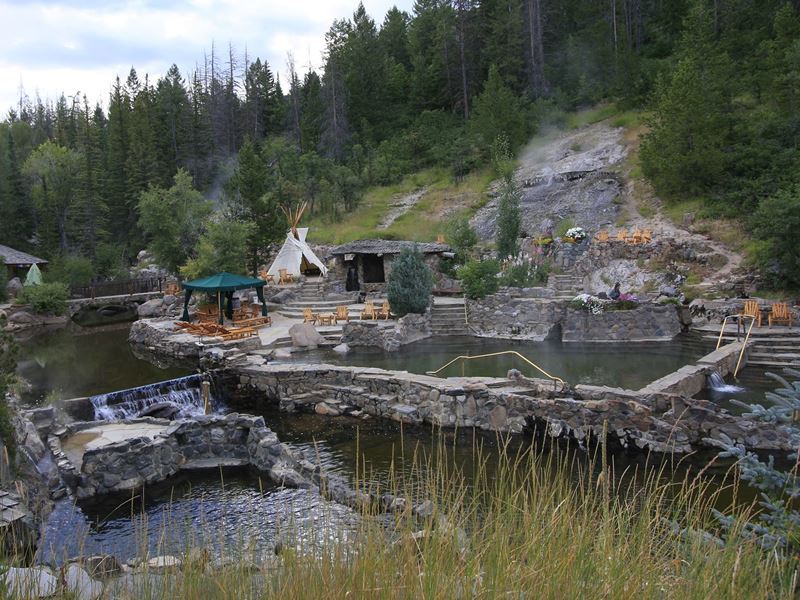 Check out the state’s most compelling archaeological sites

What: For those who really dig ruins, Colorado has no shortage of places to keep budding anthropologists happy. But it’s the UNESCO-listed Mesa Verde National Park that really wows; not least for its 5,000-plus archaeological sites - all of which are open to hikers. As the last known home of the Ancestral Puebloan people who lived in the area for 700 years (from 600 to 1300AD), must-dos include booking a ranger-led tour of the Cliff Palace and Balcony House, visiting the Chapin Mesa Museum, and checking out the 130 rooms and eight kivas (ceremonial chambers) at Spruce Tree House (currently closed; opening in 2019).

Highlights: Dinosaur Ridge is always a fun day out, especially if you’re with younger kids eager to walk in the footsteps of dinos (there’s over 300 of them along a mile-long path). Equally visit-worthy is Ute Mountain Ute Tribal Park for its full-day or half-day tours with Native American Ute guides, and the Crow Canyon Archaeological Center for its programs that include excavating in the field with archaeologists, analysing artifacts, and recording data in the laboratory. 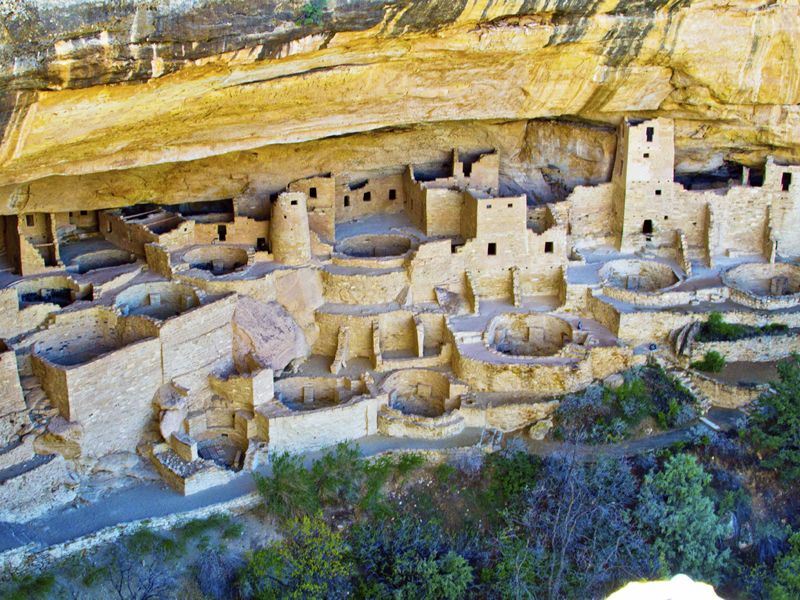 What: While it’s mostly about the Big Horned Sheep (the official state animal of Colorado that hangs out on the peaks of the Rocky Mountains and at Horseshoe Park), the wildlife scene here is diverse. Expect to see Desert Big Horn Sheep (their relatives) at the Colorado National Monument near the city of Grand Junction, black bears at the Rocky Mountain National Park, and wild horses at Mesa Verde National Park. Also spot mountain goats on Mount Evans, pronghorn (American antelope) in the Comanche National Grassland, and birds such as hawks and bald eagles swooping over the State Forest State Park and the San Juan National Forest.

Highlights: With over 6,000 miles of streams, more than 2,000 lakes and reservoirs, and around 35 species of both warm- and cold-water fish to choose from, professional and amateur anglers are in luck. Head to the quarter-mile section of the Taylor River in the northeast part of Gunnison County to hook some of the biggest trout in the state (up to 15lbs) as well as Kokanee Salmon (typically best caught between late-August and September when they move upriver). 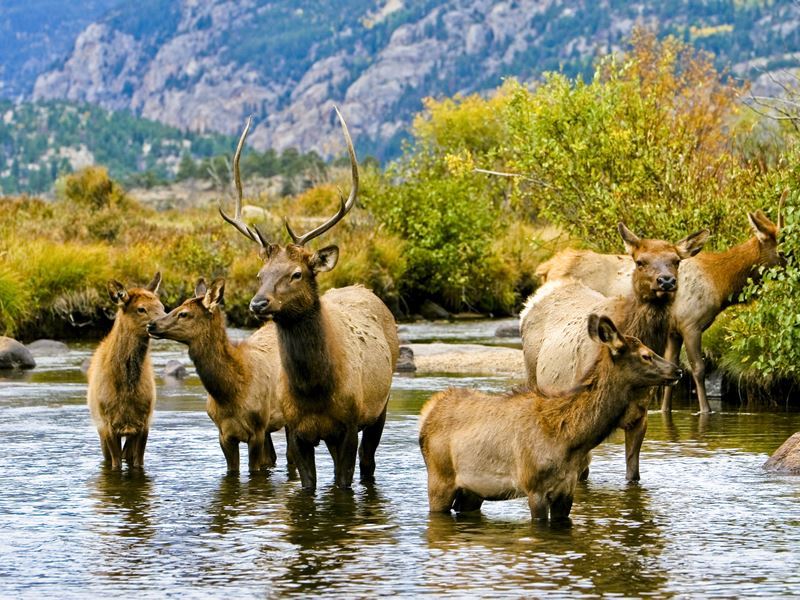 What: Road trips don’t get much cooler than the Mount Evans Scenic Byway (also known as Colorado Highway 5) - the highest paved road in America that climbs more than 7,000 feet in just 28 miles and reaches an altitude of 14,130 feet. The journey itself takes just two hours and passes through five climate zones before reaching the 14,264-foot summit of Mount Evans - the highest of the Chicago Peaks in the Front Range of the Rocky Mountains. Just be aware that because of the snow, the road is only open from the Friday of Memorial Day weekend in May to the first weekend in October (access to the top of Mount Evans is then closed).

Highlights: As you’d expect, the views from the car window up to Summit Lake are magical (no vehicles are allowed past this point so you’ll have to hike it or bike it to Mount Evans’ summit). There’s also plenty of interesting places to stop off, including Echo Lake for summer picnics and hiking, Summit Lake for big horn sheep and Rocky Mountain goat-spotting, and Mount Goliath for spring wildflowers such as alpine forget-me-nots, fairy primrose, purple fringe, and chiming bells. 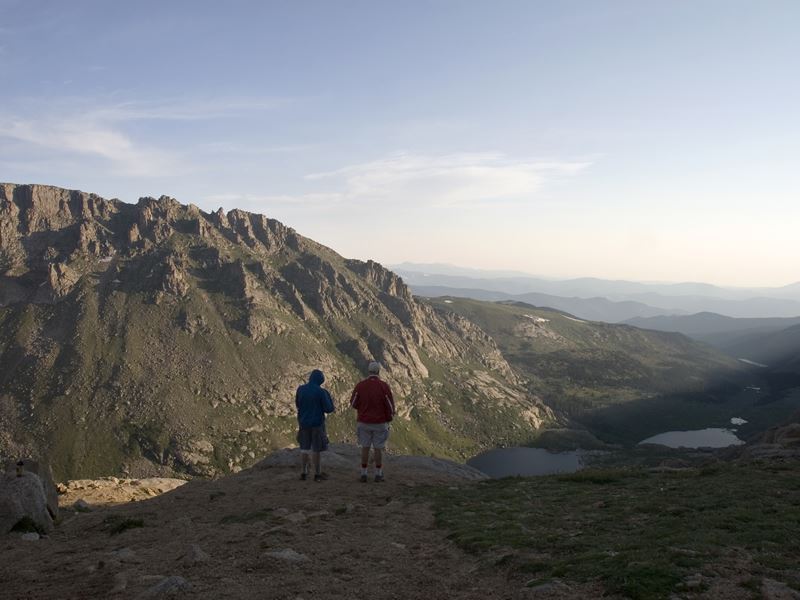 Lace up your walking boots and hit the hiking trails

What: From grand mountain peaks and glacier-carved canyons to flower-blanketed meadows that go on forever, Colorado’s landscape thrills hardcore hikers and casual strollers alike. Try the Four Pass Loop for a 26.6-mile backpacking circuit around the Maroon Bells Wilderness, the La Plata Peaks Trail for a cool-off at the gorgeous Twin Lakes at the bottom, and the Blue Lakes Trail for an 8.6-mile journey filled with craggy peaks and alpine scenery. Also popular is the 2.5-mile Diamond Lake Trail in the Indian Peaks Wilderness and the 6.6-mile Lory State Park Loop that’s made up of six mostly-pedestrian trails at a low-elevation site near Fort Collins.

Highlights: Outdoorsy types keen to rev it up on Colorado's rugged terrains can rent an ATV and ride the off-road trails and paved roads unguided and at their own pace. Estes Park ATV Rentals offers both newbies and advanced drivers a choice of rider-tested routes through the Rocky Mountains’ backcountry. There’s all types for ATV’s available, all of which are replaced every six months to ensure a very safe ride. 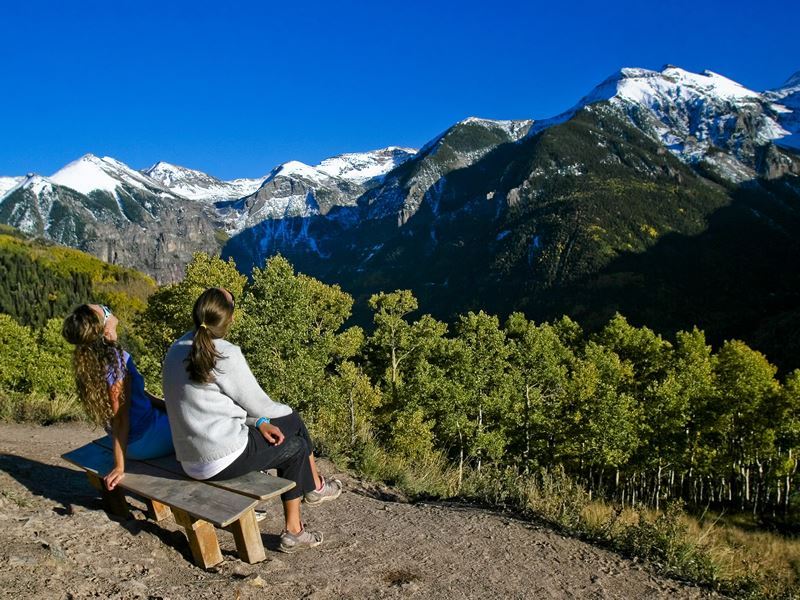 What: For watery thrills, Colorado really does have it all; hot springs, glassy alpine lakes, and lounge-worthy beaches flanked by the Rocky Mountains. Head to Medano Creek at Great Sand Dunes National Park & Preserve and Blue Mesa Reservoir at Curecanti National Recreation Area for sunbathing and summer swimming, Chatfield State Park for watersports (waterskiing, fishing, jet skiing), and Grand Lake for whiling away the hours staring at glistening waters and poignant peaks. If you’re travelling with kids, Pirate’s Cove Family Fun Aquatic Center in Littleton and Waterworld in Federal Heights both have great rides, slides, wave pools, and lazy rivers. 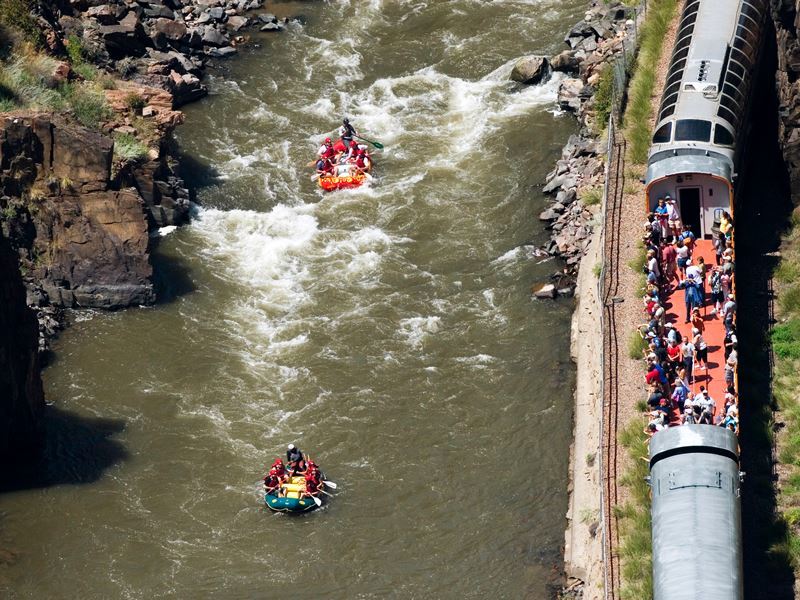 What: While Colorado’s vast mountains, rivers and valleys are mightily impressive on ground level, nothing trumps an aerial view. Little wonder, then, that zip lining adventures are so appealing to those who fancy soaring through the air at great speeds (and heights) whilst strapped to a cable. Most tours offer by-the-hour sessions, with some offering “night flights” for the very brave. Some of the top picks for statewide zip lining outfitters that cater for all levels include Captain Zip Line Adventure Tours, Full Blast Adventure Center, Royal Gorge Zip Line Tours, Glenwood Canyon Zipline Adventures, and Soaring Tree Top Adventures.

Highlights: Colorado claims to hold some of the world’s coolest balloon festivals (mostly held between July and November). Watching these inflatables taking over the sky is a lot of fun, but not nearly as much as riding in one yourself. There’s plenty of offer, but newbies should try Steamboat Springs as the gentle winds make this one of the best places to board a balloon and see the landscape from all directions. 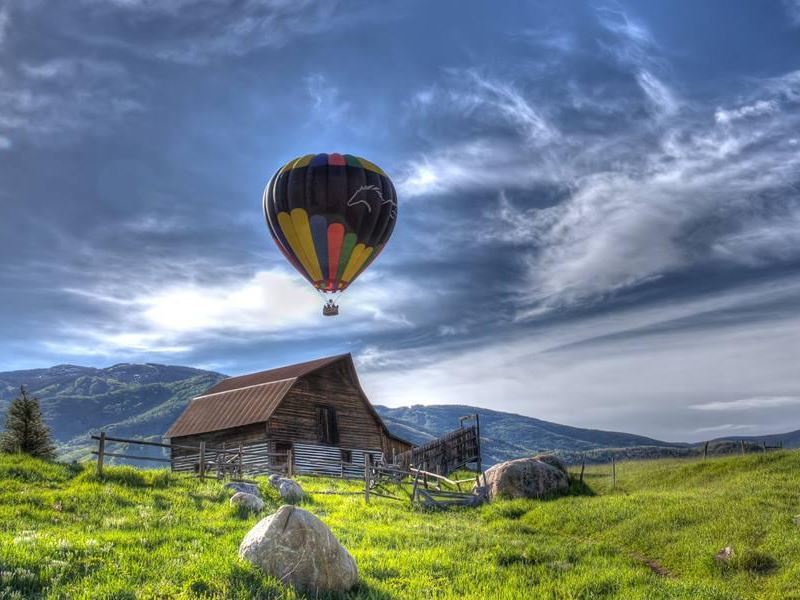 Take an exhilarating ride on the restored railroads

What: For epic views that are not seen on road trips, riding Colorado’s historic railroads is addictive (the Colorado Tourism Office likens the experience as “akin to eating potato chips - one is never enough”). The best of these heritage rides include Georgetown Loop Railroad for its Devil’s Gate High Bridge, the Pikes Peak Cog Railway for its 14,115-feet climb that inspired the song America the Beautiful, and the Rio Grande Scenic Railroad for its daytime rides over La Veta Pass. Another highlight is the Royal Gorge Route Railroad that follows the winding Arkansas River deep within the soaring 1,000-foot granite cliffs of Colorado's grandest canyon.

Highlights: The Durango & Silverton Narrow Gauge Railroad takes you over 45 miles of track originally laid in 1882 between the mining town of Silverton and the railroad-built town of Durango. Choose from two tours: the nine-hour Round Trip Silverton Train Tour that stops for a couple of hours in Silverton, or the Skyway Tour that includes a bus ride on US Highway 550's scenic San Juan Skyway. 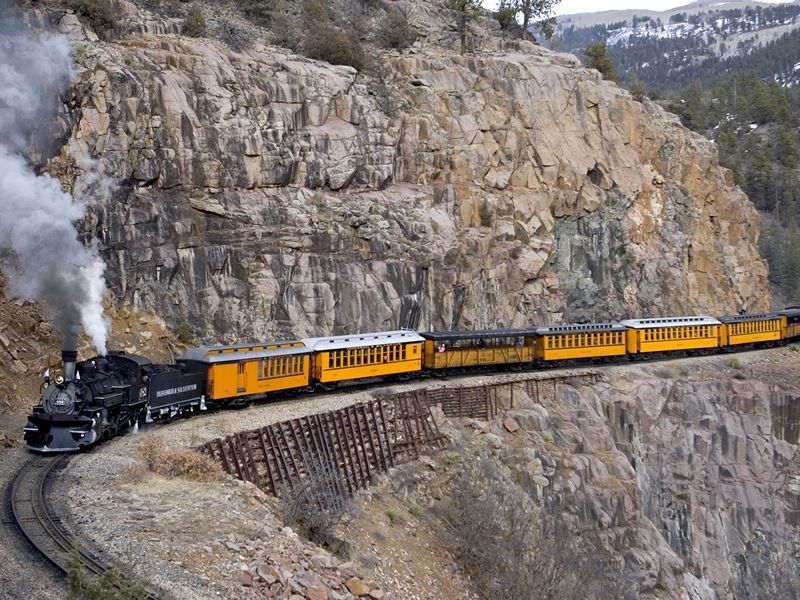