Exploring Colorado’s gold rush towns not only offers the chance to step back in time, delving into its rich, fascinating history, but to enjoy spectacular surrounding scenery and unique activities you may not have the chance to experience at home. Take a tour through a real mine and spot the gold or silver veins, try your hand at gold panning or even watch a Wild West shootout – murder and mayhem were common during this period from the mid- to late-19th century. Though the typical gunfighters facing each other in the streets depicted in television in film were fairly rare, they did occasionally occur. 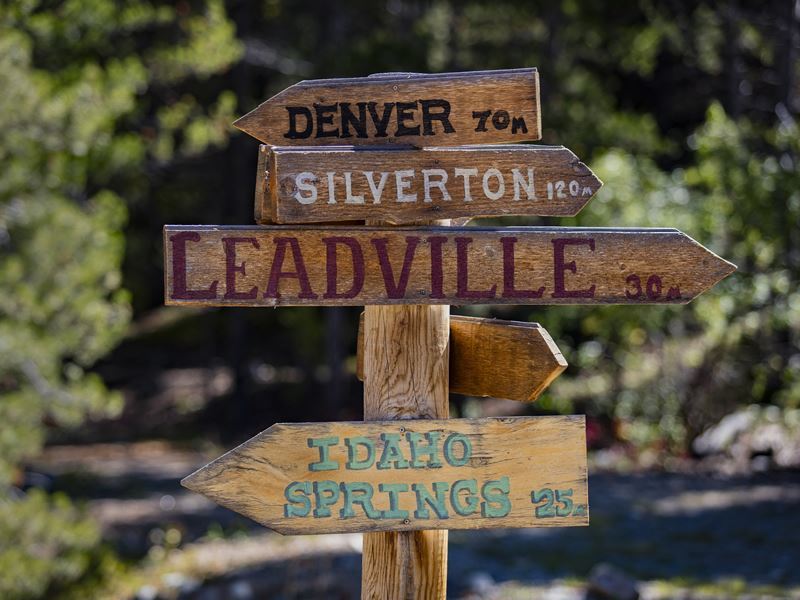 This old town was the site of the last, and the greatest, mining boom in the state. It attracted tens of thousands of people to this town just west of Pikes Peak that bills itself as the “World’s Greatest Gold Camp.” This was a booming place in the late 1800's and early 1900's, with a population of more than 55,000. The possibility of riches not only drew hardworking miners, but the dregs of society, and lawless streets were often the result. At the same time, it was one of the first cities in the nation to get electricity, which arrived in 1892, as did the first telegraph and telephone. Cripple Creek was also the home of an especially famous, upscale brothel which was lavishly decorated with imported European furnishings, including elaborate chandeliers and crystal gaslights, velvet draperies and lace curtains. The Old Homestead has managed to survive, thanks to the local women who share the stories of the those who worked there, and the wealthy that came to visit them. It was opened as a museum in 1958, with many of the original furnishings still intact.

Visitors to Cripple Creek can also experience shootout reenactments in the streets, catch an old fashioned melodrama at the historic Butte Theater, and even ride the rickety lift 1,000 feet underground into the Mollie Kathleen Gold Mine. 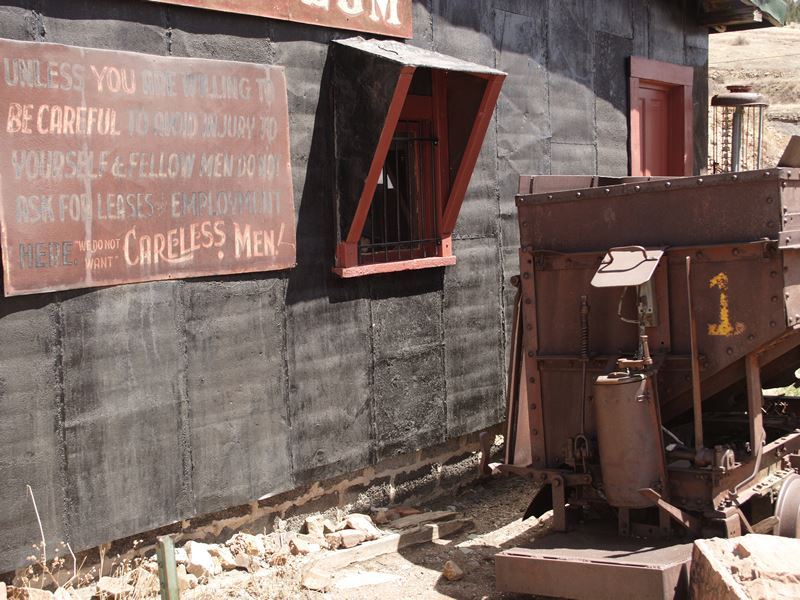 Just seven miles from Cripple Creek is a whole other kind of Old West gold rush town that’s changed very little over the last century or so: Victor. Some refer to it as a ghost town and while it is much quieter than its neighbour, with no casinos in sight, it is still inhabited by some 400 residents, and provides an especially authentic glimpse at late Victorian times. Simply wandering the streets can provide an eye-opening look – check out the Victor Daily Record newspaper office, the trolley depot and the stunning Masonic Hall. Pop into the 1899 Victor Hotel and ride the magnificent bird cage elevator; just beware that if you decide to stay overnight, there have been numerous reports of paranormal activity.

Serving as the gateway to the Rocky Mountains for Denver area residents, Idaho Springs also has an interesting mining heritage that lives on through the well-preserved Miner Street buildings. Today they’ve been transformed into souvenir shops, antique stores, boutiques and the like. The Argo Gold Mine and Mill offers visitors the opportunity to try gold panning and find out about the inner workings of a mill.

Further west into the Rockies is Georgetown, a Victorian mining town that’s home to the Georgetown Loop Historic Mining and Railroad Park. The park includes a historic silver mine that can be toured, along with a number of buildings from the period, including an 1871 mill building and an 1884 depot. Here, passengers can hop aboard for the 75-minute ride across jaw-dropping mountain terrain. 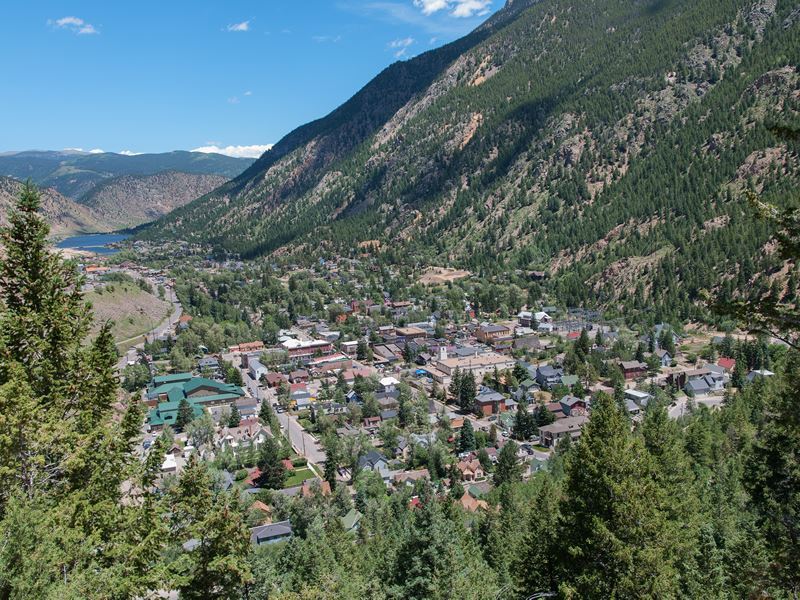 First settled in 1859, Breckenridge is incredibly photogenic as well as a very popular ski town. Many of its original buildings which hosted dance halls, saloons and hotels still stand today. Its entire Victorian core has been carefully preserved, and you can see it by taking a self-guided walking tour or one of the Summit Historical Society’s guided tours, which will bring you past the colourful structures that now house restaurants and shops. 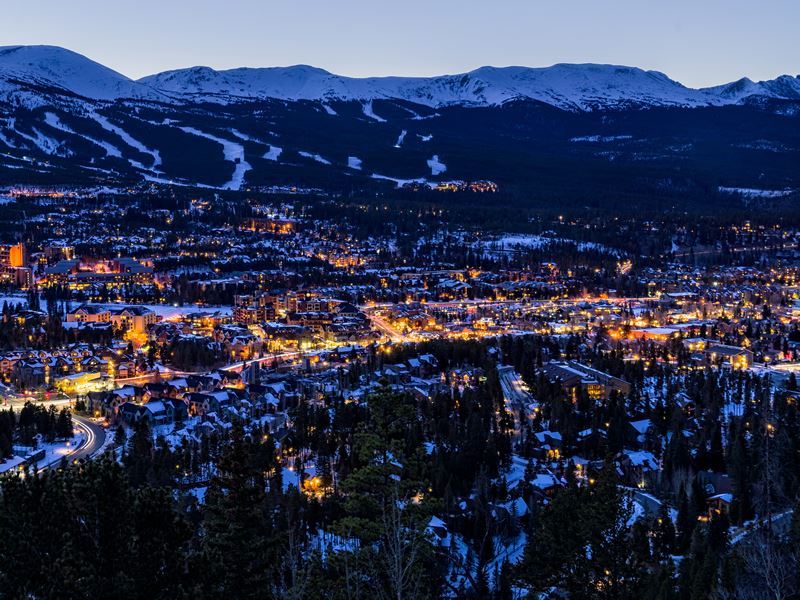 Leadville is the highest incorporated city in the United States, at an elevation of 10,152 feet in the heart of the Rockies. This gorgeous town is surrounded by dramatic mountains and lined with magnificent Victorian buildings. In fact, 70 square blocks have been designated as a National Historic Landmark. Once the longest-lived, wealthiest and bawdiest mining boomtown in the nation, visitors can explore its history through a number of museums and historical tours, as well as visit one of the most famous mines in America’s history, the Matchless Mine. 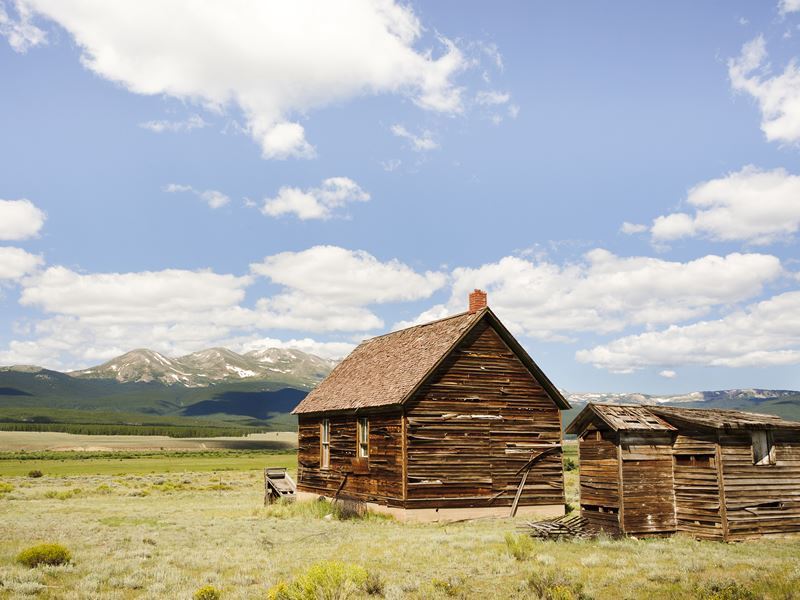 Although St. Elmo is home to a few scattered residents, it’s officially a ghost town, and one of the best preserved in the state. In the 1880's, there were some 2,000 residents here and 150 patented mine claims. Visitors can stroll the intact wooden sidewalks to view the original general store, which is still in operation today, an old school, church and other structures.

Tucked deep within the San Juan Mountains, Ouray is often compared to the Swiss Alps with its impressive high peaks. Rather isolated, as you drive in it really feels as if you’ve taken a journey back in time. The Main Street is lined with 19th century mining homes and Victorian structures, and is registered as a National Historic District. While you’re here, you can also take advantage of the hot springs located right in the heart of town to soak in the soothing waters while gazing at the breathtaking surrounding scenery. 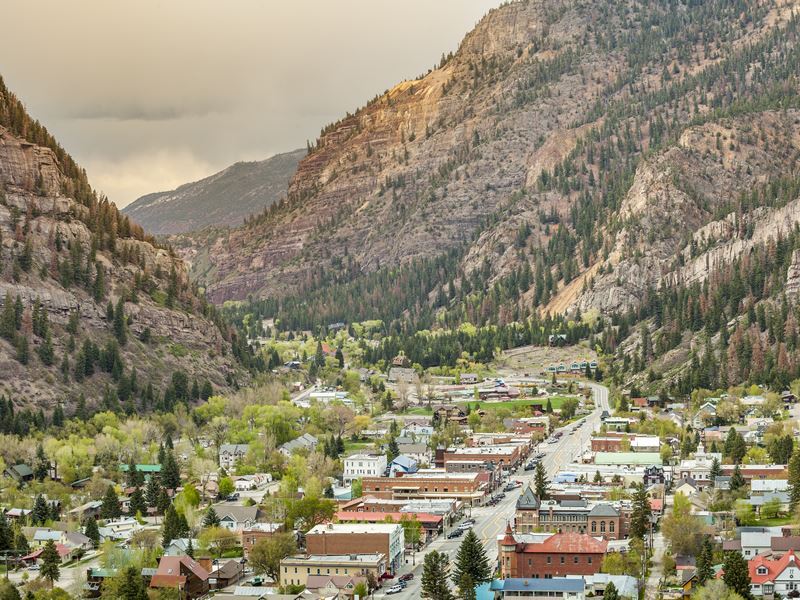 Silverton is connected to Ouray via the famous “Million Dollar Highway,” known as one of the most scenic drives in the entire country. While you’ll have to travel the narrow, winding mountain road that edges steep cliffs and lacks guardrails, the adventure lives up to the name, providing true million dollar views. Silverton itself is reminiscent of a small Alaskan town and is filled with 19th century red brick and wooden buildings, as well as log cabins with white picket fences. Walk down Blair Street and you’ll be in Silverton’s ill-famed red light district – you can also explore the 1902 Country Jail Museum, the Silverton Standard and the Miner Newspaper and take the Mayflower Mill Tour. 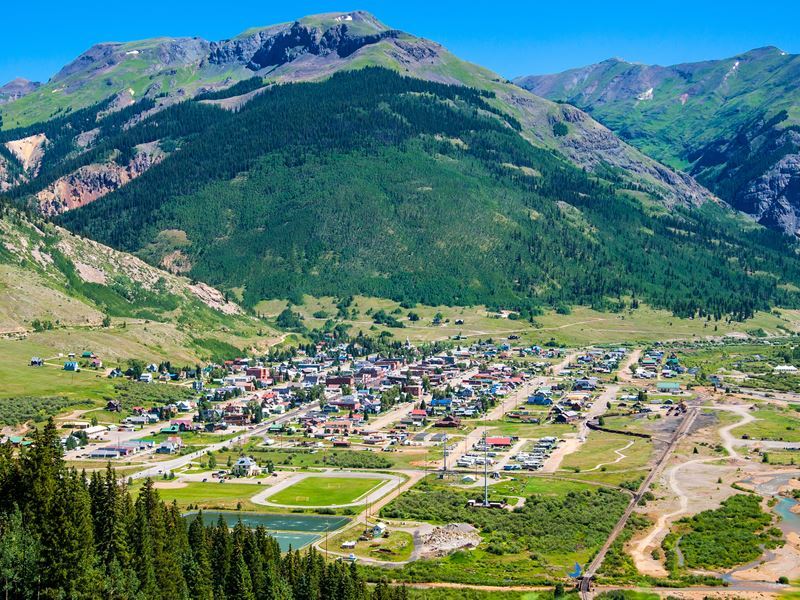 Founded in 1880 by the Denver & Rio Grande Western Railroad as a centre for mining, agriculture and cattle interests, Durango has managed to preserve all aspects of its Western heritage and is arguably best known for its narrow gauge steam train. Trains played a significant role in the Old West, and today, visitors can hop aboard an historic steam train, the Durango & Silverton Narrow Gauge Railroad, to embark on the 45-mile ride to Silverton, known as one of the most scenic rail adventures in entire nation. In town, the Durango & Silverton Narrow Gauge Railroad Museum showcases a wide range of exhibits, including an 800-square-foot scale model railroad and a baggage car used in the classic Western film, “Cassidy and the Sundance Kid.”

There are many other historical attractions as well, including walking tours of historic downtown Durango, performances at the elegant Henry Strater Theatre that often take the audience back in time to the town’s frontier days, and the opportunity to experience the romance of the Old West with a chuckwagon dinner under the stars at the Bar D. 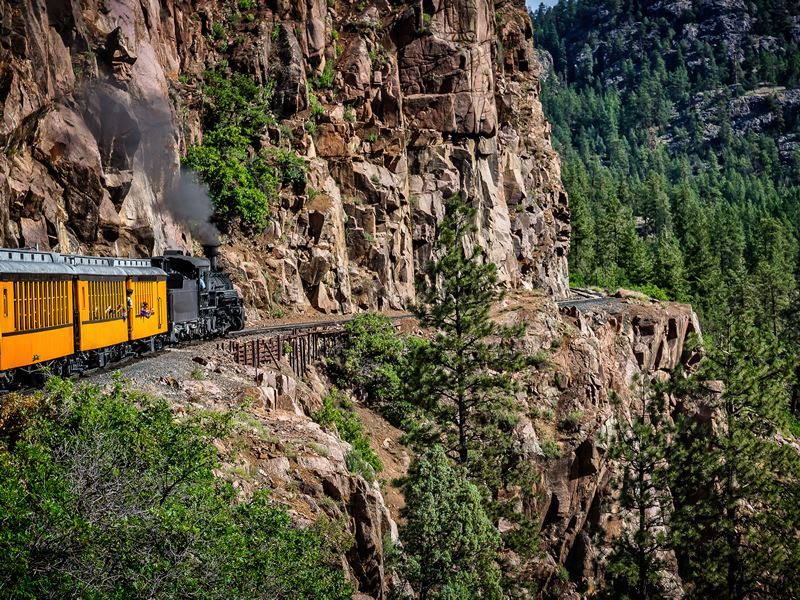 Located in the eastern end of the San Juan Mountains in a former volcanic caldera, Creede is surrounded by precipitous cliffs that have limited its physical growth. Home to less than 300 year-round inhabitants today, it still manages to offer lots to tourists who are interested in history, including the Underground Mining Museum and Creede Historical Museum, the nationally acclaimed Creede Repertory Theatre, and a number of shops, restaurants and hotels housed within building that date back to the 1890's. 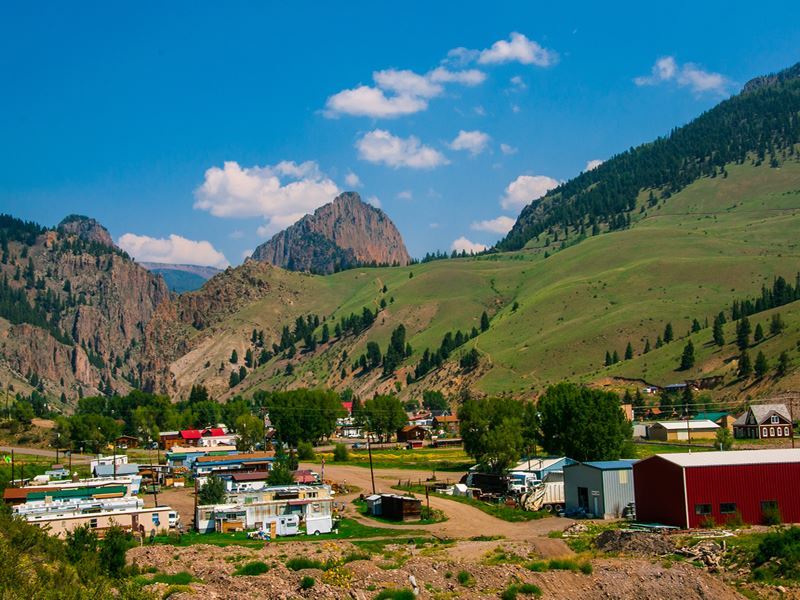 Another San Juan Mountain town, Telluride is often ranked among North America’s most beautiful towns, surrounded by red stone mountains and lined with frontier-era facades and Victorian buildings in its compact downtown area. The 1896 Hall’s Hospital now serves as the Telluride Historical Museum and is one of the town’s oldest buildings. The museum offers five walking guides that will take you past many of the Telluride’s highlights, like the brownstones and grand Victorians, as well as the very place where in 1889 infamous outlaw Butch Cassidy robbed his very first bank: the Appaloosa Trading Company, along with the Old Town Jail and the Rio Grande Southern Railway Depot on Main Street. 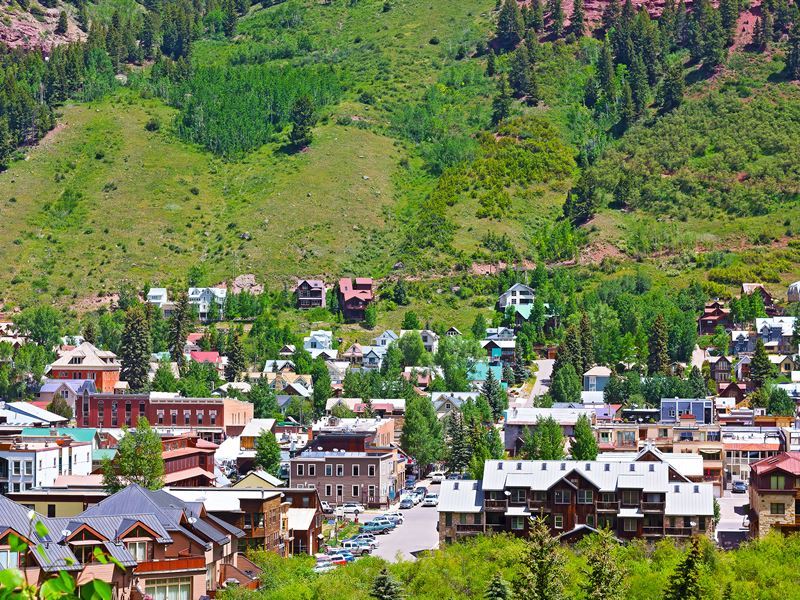