From bed-ins to trashings, many famous incidents have taken place from the confines of a hotel guestroom. We check out the top 10 most celebrated accommodations on the planet. 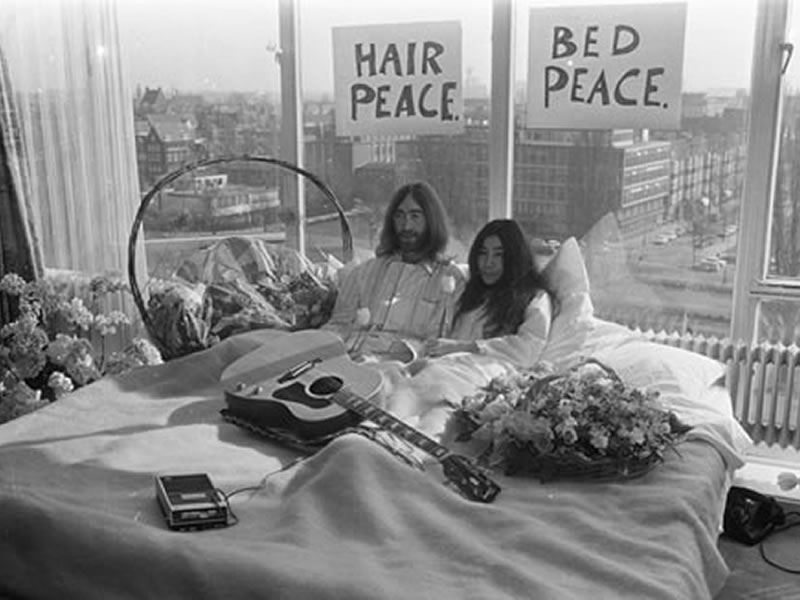 10. Hugh Hefner Sky Villa, Palms, Las Vegas
Where: 4321 West Flamingo Road near to the Las Vegas Strip.
Claim to fame: Minted high-rollers can get the party started Hugh Hefner-style at this blow-the-budget two-storey Villa in the Palms’ aptly-named Fantasy Tower. Accessed by a private glass elevator, this daddy of all guestrooms is a three-bedroom 9,000 square-foot space fitted out with everything Playboy. Created by Hef, this exuberant space boasts a huge eight-foot rotating circular bed with an overhead mirror, a glass-walled Jacuzzi overlooking the Strip, multiple bars, and a superb swimming pool with a sunbathing terrace. Add to the mix a party-sized bathtub, gym, Vegas poker table, pop-up plasma TV’s, walls adorned with sexy Playboy artwork, a media room for movie screenings and an indoor waterfall and you’re pretty much in Playboy heaven – but without the Bunnies. Costing an estimated $10 million to build (Hef still gets to stay here for free), this is the coolest spot to host a Vegas house party for up to 250 of your closest friends. Champagne buckets and personal butlers are included.
Cost: From £26,539 per night.

9. Presidential Suite, Kempinski Hotel Adlon, Berlin
Where: Unter den Linden 77, just steps from the Brandenburg Gate
Claim to fame: It was while he was holed up in the seven-room Presidential Suite at Berlin’s grandiose hotel in 2002 that Michael Jackson infamously dangled his then nine-month-old infant son Prince Michael II (aka Blanket) out of the fifth-floor window. This 1,991-square-foot suite is located in the hotel’s Security Wing and suitably geared towards hyper-sensitive superstar guests; preventatives include steel-enforced bulletproof walls and windows, a separate lounge for chauffeurs and bodyguards, a security hub with video monitoring, a reinforced panic room and two private lifts leading directly to the underground car park. Fashioned to accommodate large entourages, these posh lodgings offer Baroque-style furnishings, a spacious living room, an office and conference room, a fitness area, and a fabulous bathroom with a Finnish sauna and Jacuzzi. There is also a beautiful master bedroom with a separate dressing room, a separate lounge for your minions and a kitchen for your personal butler.
Cost: From £16,587 per night.

8. The Al Capone Suite, The Biltmore Hotel, Florida
Where: 1200 Anastasia Avenue in Coral Gables, southwest of downtown Miami.
Claim to fame: Adored by the famous and infamous, the One-Bedroom Presidential Suite (nicknamed The Al Capone Suite) is the jewel in the crown at this historic landmark hotel. During the Prohibition in the 1920s, the Chicago mobster ran a speakeasy out of the Biltmore while he camped out on the 13th-floor in a two-storey suite known as the Everglades. This was also the spot where hit-man Thomas Fats Walsh was fatally shot in 1929 – although the jury is still out as to Capone’s involvement in his death. Today, this extraordinary penthouse dwelling exudes Old Florida charm; from the living room with its hand-painted ceilings and baby grand piano to the master bedroom complete with a Roman bathtub. A second bedroom is nestled upstairs and there is also a small bar-cum-kitchen area located near the private elevator entrance. The balcony overlooks the landscaped Donald Ross 18-hole championship golf course and the hotel also boasts a 600,000-gallon swimming pool – reportedly the nation’s largest.
Cost: From £600 per night.

7. The Oliver Messel Suite, The Dorchester, London
Where: 53 Park Lane in the heart of Mayfair between Hyde Park and Marble Arch.
Claim to fame: Named after the eponymous British artist, bon vivant and leading stage designer Oliver Messel, this lavishly ornate 1320 square-foot Art Deco gem is located on The Dorchester’s seventh floor. Created by Messel in 1953 on an unlimited budget, it is famed for being Elizabeth Taylor’s most cherished ‘home-from-home’ – and was also where the actress and Richard Burton spent part of their first honeymoon in 1964. Complete with an ante-room, sitting room, two bedrooms, two bathrooms and a private terrace that affords striking views across London, the décor is over-the-top theatrical. Fans of maximum chintz will love the hand-painted silk-lined walls, gilt mirrors, gold leaf toilet seats, gilded moldings, bronze pillars and floral fabrics – all of which evoke unabashed luxury. Aside from its Taylor-Burton connection, this opulent suite has also played host to Hollywood royalty including Laurence Olivier, Vivien Leigh, Marlene Dietrich, Noel Coward, Alfred Hitchcock and Brigitte Bardot.
Cost: £3,798 per night.

6. Room 1410 (Presidential Suite), The Mark Hotel, New York City
Where: Madison Avenue at 77th Street, near to Central Park.
Claim to fame: With the help of his then-girlfriend supermodel Kate Moss, Johnny Depp became a bona fide Hollywood bad boy in 1994 when he tore up the Presidential Suite at Manhattan’s Mark Hotel. Guests were woken by the sounds of shattering glass and screams; when the police arrived they found the celebrity pair sitting in a pile of debris. Depp reportedly claimed that the vandalism was the fault of a pet armadillo hiding in his wardrobe, but the police could not find the alleged creature and the actor was booked on felony criminal mischief charges and sent a bill for $9,767 to cover the damage. The incident is still cited as the perfect example of trashing a hotel room and Depp has since claimed that the hotel’s owner thanked him for all the free publicity. This Upper East Side grand dame was gutted and completely renovated in 2009; the most prestigious room is now the 1,640 square-feet Premier Two-Bedroom Suite which features a master bedroom with an adjoining black and white marble bathroom as well as a kitchen, dining room and living room.
Cost: From £862 per night.

5. Pretty In Pink Suite, Palm Springs Rendezvous, Palm Springs
Where: 1420 North Indian Canyon Drive, on the northern outskirts of downtown Palm Springs.
Claim to fame: The room that served as Marilyn Monroe’s desert hideaway in the 1950’s is now known as the Pretty in Pink suite at the retro-chic Palm Springs Rendezvous (formerly the Ballantines Hotel). There is a lot of pink in this whimsical poolside room; pink carpets, pink painted walls, a pink rotary phone, a pink chenille bedspread on a king-sized bed and an inviting pink sofa beneath a large Andy Warhol print of the screen goddess. Other quirky features include a powder room with a double sink and pink whirlpool tub large enough for two, a kitsch kitchenette with retro appliances and a 1000-piece Marilyn Monroe jigsaw puzzle. The room overlooks the hotel’s courtyard with its pristine pool, hot tub, swaying palms, blue Astroturf sun deck and chaise lounges for those who want to bake in the desert sun. Nostalgic 1950’s music wafting through the air and free-to-use cruiser bicycles complete the movie star experience of a bygone age.
Cost: From £118 per night.

4. Room 776, The Mayflower, Washington, D.C.
Where: 127 Connecticut Avenue, south of Dupont Circle and a few blocks from the White House.
Claim to fame: Franklin Delano Roosevelt stayed in The Mayflower’s room 776 in the months leading up to his 1933 presidential inauguration and subsequent move to the White House. It was here he drafted his inspirational speech that included the famous phrase, ‘The only thing we have to fear is fear itself’. Labelled ‘Washington’s second best address’ by Harry S. Truman, it was also at this hotel where FBI director J Edgar Hoover and his long-term mail companion Clyde Tolson lunched on a near daily basis for around 20 years. Nowadays this historic hotel is still frequented by presidents, politicians and power players and famed for hosting inaugural balls and major events. There are 650 guestrooms, 74 beautifully-appointed suites and on-site amenities include the American brasserie EDGAR Bar & Kitchen, a Thomas Pink retail store and the Grand Ballroom that has served as the backdrop for every Presidential Inaugural Ball since first opening in 1925 to honour Calvin Coolidge.
Cost: From £185 per night.

3. Room 1742, Fairmont The Queen Elizabeth, Montreal
Where: 900 René-Lévesque Boulevard West, in the heart of downtown.
Claim to fame: This 650-square-foot Montréal hotel room is most famous for hosting John Lennon and Yoko Ono’s second staged ‘bed-in’ to promote world peace. After their weeklong ‘Bed-In For Peace’ at the Amsterdam Hilton, Lennon and Ono moved to The Queen Elizabeth to set up camp in Suite 1742. Their protest against the Vietnam War proved to be a headline-grabbing event; it was in this room that they held court with news reporters and also recorded Give Peace a Chance between May 26 and June 2, 1969. Five weeks later, on July 7, the record was released in the US and reached number 14 on the Billboard charts. Nowadays guests can stay in the now-named John Lennon and Yoko Ono Suite where walls are adorned with press cuttings, photographs of the couple and framed gold records of Give Peace a Chance. The luxury one-night ‘Bed-In for Peace Package’ offers hippie credibility and includes souvenir pajamas like those worn by John and Yoko, a lyric sheet of the peace anthem and breakfast in bed.
Cost: From £510 per night.
More information and to book: Fairmont The Queen Elizabeth, Canadian Sky

2. Penthouse Suite, Regent Beverly Wilshire, Beverly Hills
Where: 9500 Wilshire Boulevard at the south end of Rodeo Drive.
Claim to fame: Not only did the 1990 movie Pretty Woman make Julia Roberts a worldwide star, but it also cemented the Regent Beverly Wilshire’s Penthouse Suite as an iconic crash pad. Used as a backdrop for numerous scenes in the hooker-meets-millionaire love story, this majestic 5,000 square-foot three-bedroom, four-bathroom suite is one of most expensive in the world. Located on the private, key-accessed 14th floor of the Beverly Wing, there is plenty here to dazzle; sparkling Swarovski chandeliers, custom-designed marble mosaic flooring and floor-to-ceiling windows overlooking Rodeo Drive. The master bedroom has a 160 square-foot walk-in wardrobe and antique mirrors whilst the master bathroom is decked out with sleek glass tiles and a deep-soaking tub. Highlights include a state-of-the-art kitchen with gleaming marble countertops, a spacious dining room with a table to seat six, a media room with a 55-inch flat-screen television and a furnished balcony. The nightly rate also includes a fridge stocked with your favourite food and a personal concierge to cater to your every whim.
Cost: From £16,587 per night.

1. Room 64, Château Marmont, Los Angeles
Where: At 8221 Sunset Boulevard in West Hollywood.
Claim to fame: Modelled on the Loire Valley’s Chateau Amboise, this fantastical folly was where Bogart bedded Bacall, James Dean hopped in through a window to audition for Rebel Without A Cause, Jim Belushi died of a heroin overdose in Bungalow #3 and plenty more Hollywood stars caused tabloid-worthy commotions. The most famous room in this turreted castle towering over Sunset Boulevard is Room 64, the two-bedroom penthouse suite where Howard Hughes famously spied on starlets in the oval swimming pool below through his binoculars. This sprawling 3,000 square-foot space has a formal dining room, two bathrooms, two designer-led bedrooms with king and queen-size beds, a dressing area, a working fireplace, a polished marble entrance and grand piano. Most impressive is the 1,500-square-foot of private wraparound terrace overlooking Hollywood. With other A-list touches that include chauffeur-driven cars and personal trainers, a stay in Room 64 is as glam as it gets and is still a huge draw for the film industry’s elite. Little wonder Hughes was happily holed up here for three years.
Cost: From £2,985 per night.

Further reading: New York has some of the best hotels in the world – many of which shine a light on the city’s celebrated past. We discover the top 10 historical hotels in New York, all famed for their illustrious guests, architectural significance and old-school charm.