Driving into Moab, Utah makes you truly feel like you are in the Wild West. Looking up at the giant rocky escarpments you half expect to see smoke signals from the army of Indians waiting to attack the cowboys meandering by below. The land is dry and the sun is hot and the red colour of the landscape is amazing. Surrounded by canyons, ridges and mind blowing rock formations, Moab is the gateway to some of Americas prettiest landscapes. 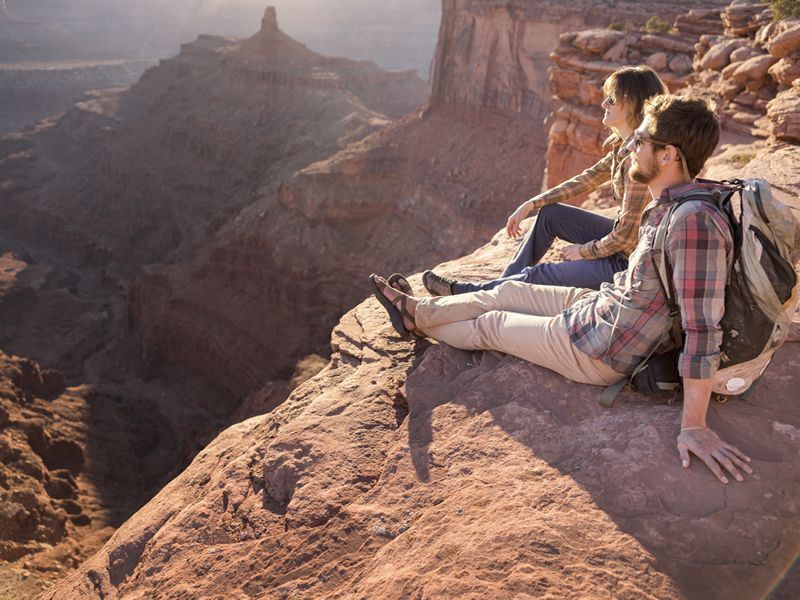 Moab is a city in Grand County in Eastern Utah. During the 1800’s the area around Moab served as the Colorado River crossing. Mormon settlers attempted to establish a trading fort at the river but after countless Indian attacks the fort was abandoned. Moab had a mining boom in the 1920’s but after the Cold War the boom was over and the population drastically declined. Then in 1949 western movie director John Ford filmed Wagon Master in the area putting Moab on the map. Movies such as Indiana Jones, Thelma and Louise, Star Trek, Austin Powers and 127 Hours have been filmed in Moab and it’s surrounding areas. But there’s more to Moab than big screen fame. Tourists flock to Moab for the unique experiences it can offer. Whether you stay a day or a week you wont run out of things to see and do.

Claustrophobic? Can you imagine living in a 5,000 square foot home that has been carved out of rock? In the 1940’s the Christensen family built a small alcove in the rock for their boys to sleep in. Twenty years later that small alcove had become a huge underground house featuring 14 rooms, a 65 foot chimney and a bathtub built into the rock. After a tour of this amazing piece of engineering there’s lots more to see at Hole N The Rock. Wonder through the zoo or take in the metal art sculptures. There’s also a display of antique tools, vintage neon signs, mining equipment and unusual time pieces from different eras.

For the active folk, Moab offers a huge range of hiking and mountain biking trails. Take your pick of hiking trails that vary in length depending on how much time you have. There’s even pet friendly tracks so you can take your beloved pooch along for a hike. If you wanted something a little more energetic and adventurous then some mountain biking is the way to go. From non technical tracks suitable for the whole family to the Killer B track where you descend almost 500 feet in less than 3/4 mile, it’s easy to spend the day traversing the winding tracks taking in the scenery.

If you happen to be in Utah over the Easter period and are looking for a unique and adventurous travel experience then you cant go past the annual jeep safari. Every year up to 1,000 enthusiasts descend on Moab to take part in some recreational four wheel driving. Don’t have a four wheel drive? That’s ok because you can rent one for the event. Just make sure you book it, and your accommodation well in advance as things book out pretty quickly.

But you cannot go to Moab without visiting one of the beautiful national parks. Arches National Park is a short 8 kilometres (5 miles) from Moab and consists of over 2,000 natural sandstone arches. Delicate Arch is probably the most famous natural span in the world. Delicate Arch can be reached via a 2.4 kilometre (1.5 mile) track. With an elevation of 500 feet, you get a fantastic view of the La Sal mountains through the arch. There’s also Landscape Arch which is the longest natural arch in the world with it’s length spanning longer than a football field.

If you head out a bit further from Moab you will come across Canyonlands National Park. Just 51 kilometres (32 miles) from Moab, Canyonlands is a myriad of breathtaking canyons, rivers, mesas and buttes. The park is divided into four sections comprising of Island in the Sky, The Needles, The Maze and the rivers themselves. Over 400,000 people visit the park every year to take advantage of the hiking, kayaking, four wheeling and mountain biking. But Canyonlands has more to offer for those that are wanting to learn the history of the area. Once home to the Ancestral Puebloans, there are well preserved mud dwellings and petroglyphs (rock art) to see. If you head out to Horseshoe Canyon you can see rock art from the Late Archaic Period that is dated from 2,000 – 1,000 BC which is believed to be some of the oldest in America.

After a day exploring the surrounding regions then why not relax in the heart of Moab. With a selection of restaurants, galleries and shops its the perfect place to buy some traditional art work or just relax with a cold beer or two. But no matter what souvenir you buy, nothing will compare to the experience of walking amongst some of America’s most spectacular scenery.