The ultimate guide to getting around Kentucky

Kentucky offers lots of Southern charm along with gorgeous scenery, an interesting history, exciting cities and alluring small towns. It’s also home to the world’s longest known cave system, with nearly 400 miles of caves, and is renowned for its fabulous food and drink. With so much to experience, it can be hard to know where to begin, but this guide on how to get around can help you create your own ideal itinerary for your visit to the Blue Grass State.

Louisville International Airport (SDF) is the state’s primary airport, served by all major American airlines, but there are currently no direct flights from UK and Ireland. To get to SDF, you can fly through JFK in New York or Chicago O’Hare International Airport via Delta Airlines, American Airlines, KLM, Virgin Atlantic, British Airways or Aer Lingus with flight times around 11 hours.

Louisville International Airport is less than 7 miles south of downtown Louisville. As public transportation is limited in the state, most visitors, especially those who want to explore other areas, will hire a car at the airport to get them to the city centre and beyond. Many of the major rental agencies are located right at the airport. There are other options for getting from the airport to downtown Louisville, however, including private shuttles, hotel shuttles, vans, limos and taxis, which are available at the traffic island to the left of the taxi stand. Uber and Lyft are also authorized to operate here and the Transit Authority of River City (TARC) provides bus service between the airport and downtown.

Frazier Museum Louisville - The Start of the Bourbon Trail 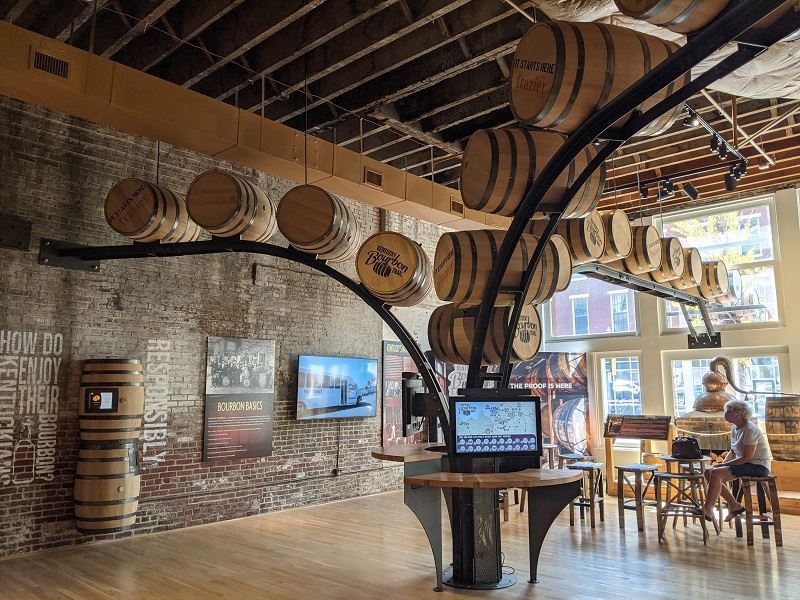 The largest city in Kentucky is famous as the namesake for the Official Bat of Major League Baseball, the Louisville Slugger. Many people know it as the place that hosts the long-running Kentucky Derby. It also happens to produce the world’s best bourbon. If can’t make it for the Derby, you’ll have the opportunity to take a tour of Churchill Downs and visit the Kentucky Derby Museum to learn more about the legendary sporting event. Baseball fans won’t want to miss the Louisville Slugger Museum and Factory which features the world’s tallest bat at 120 feet high along with bats from the greats like Babe Ruth and Cal Ripken. Visitors can tour the factory and even test their skills to see if they can swing at a fastball. In Old Louisville, take a walk to gaze at the magnificent architecture in the country’s third largest National Preservation District. the largest Victorian district in the U.S. Finally, the must-visit attraction in Louisville is the Muhammad Ali Center, dedicated to the boxer who was a son of the city. 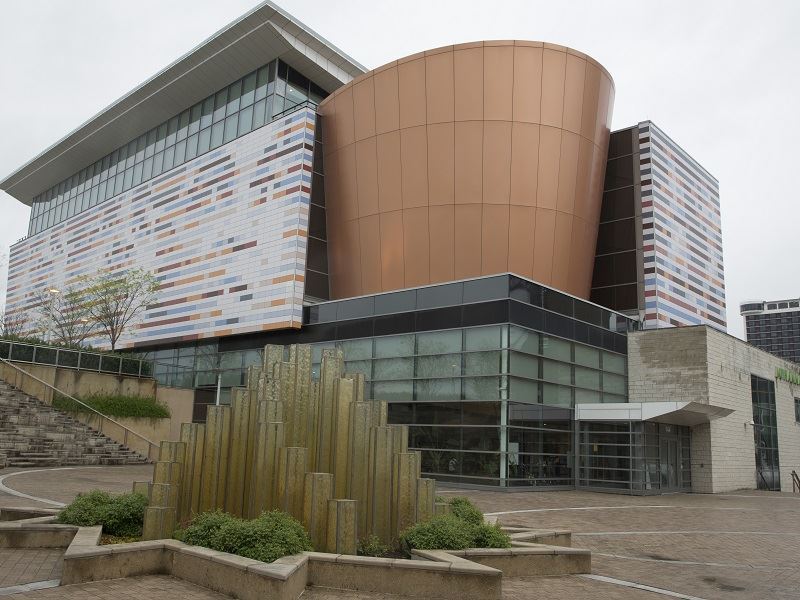 Known as the ‘Horse Capital of the World,’ Lexington has been all about the horse industry for decades now. The college town that sits in the Bluegrass region of the state is home to hundreds of horse farms, bringing the opportunity to view some 50 different breeds of horses, and meet some of the city’s most famous animal celebrities in their homes. Visitors can take horse farm tours and watch demonstrations in Kentucky Horse Park. It’s a treasure trove for history buffs too, with many historic homes, including four period homes of the region’s most famous citizens that can be toured: Henry Clay, Joseph Bryan (a grand-nephew of early pioneer Daniel Boone), John Hunt Morgan and Mary Todd Lincoln, Abe’s wife. The city also hosts a wealth of art galleries and museums.
Land Between the Lakes. The Land Between the Lakes National Recreation Area is a 360-square-mile peninsula spread across southwestern Kentucky and north-western Tennessee. It’s a scenic wonderland that offers all sorts of recreational activities, especially water sports. Try your luck at fishing, with some of the best to be found in the south-east U.S., or enjoy water-skiing, boating and swimming. You can also watch for wildlife like deer, bobcat, osprey and eagles, as well as explore some interesting historic sites, including forts and battlefields. 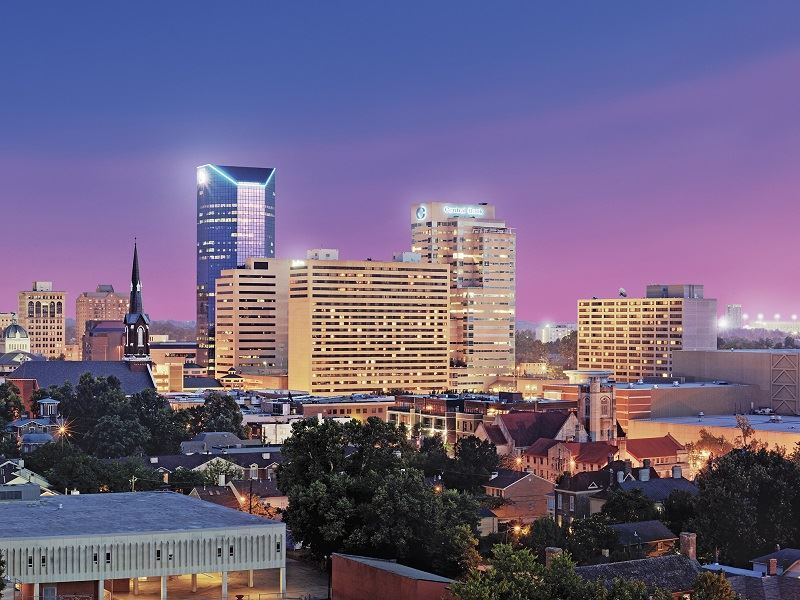 Kentucky’s oldest city was founded in 1774 and is home to a wide range of fascinating historic sites like the largest restored Shaker settlement in the country, Shaker Village of Pleasant Hill and Dedman Drugstore which still has its original soda fountain despite having opened the year the Civil War ended back in 1865. Just some of the popular things to do here include hopping aboard the authentic Dixie Belle paddle steamer for a scenic ride along the Kentucky River Palisades and strolling the downtown streets with its many antique shops and colourful storefronts, locally-made items and fantastic restaurants that serve mouth-watering Southern comfort fare.

The Shaker Village of Pleasant Hill 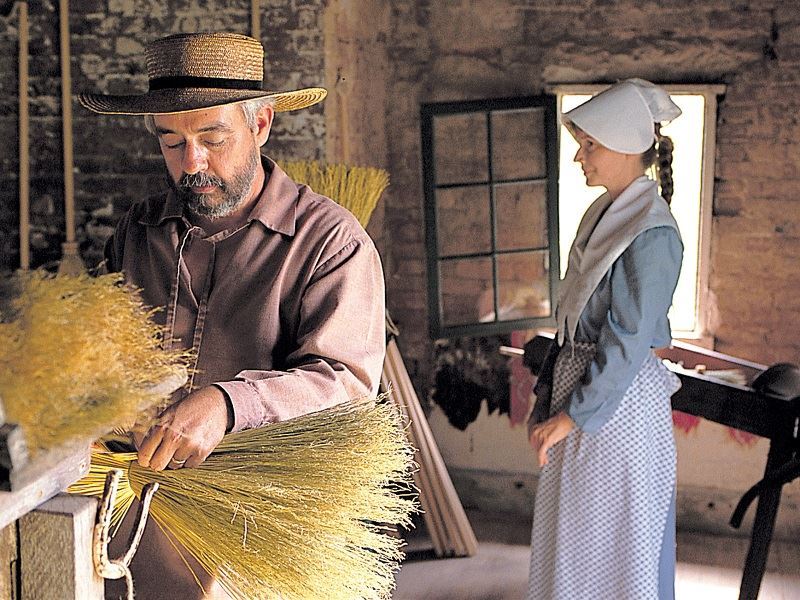 A quilter’s delight near the border of Illinois along the banks of both the Ohio and Tennessee Rivers, Paducah is known as Quilt City USA. Visit in late April or mid-September to take advantage of its QuiltWeek festival or year-round, explore the National Quilt Museum. This charming town is also a must-visit among history enthusiasts with its downtown area boasting 20 blocks that are listed on the National Register of Historic Places, including some excellent examples of 19th-century architecture. The artsy district of Lower Town offers antique shopping, boutiques and indie art galleries. Cultural events and nightlife abound after dark too, with venues for comedy, music, independent film and theatre.

Mammoth Cave National Park showcases nearly 400 miles of protected caves – and countless more that have yet to be charted. Visitors can explore caves on their own or take ranger-led tours to view spectacular crystal columns that hang from ceilings, looking as if they were sprinkled with fairy dust, along with impressive stalactite and stalagmite formations. The best way to experience it is to take one of the tours so that your guide will point out what you’re seeing. There are a variety of options, like the Historic Tour that explores old mining areas and about two miles of cave passages or the Frozen Niagara Tour, which takes in some of the caves’ highlights on a shorter excursion.

Red River Gorge and Natural Bridge State Resort Park. Two must-experience places are located near each making it easy to take in both. Red River Gorge in the Daniel Boone National Forest near Slade is a jaw-dropping wonderland. It contains the largest concentration of natural arches east of the Rocky Mountains, including Sky Bridge, its most famous, along with some 99 others as well as magnificent falls, tranquil pools and dramatic cliffs. Just ten miles from the entrance is Natural Bridge, a 78-foot-long, 65-feet-high formation of sandstone that was created over 65 million years by the rushing water of the Red River. 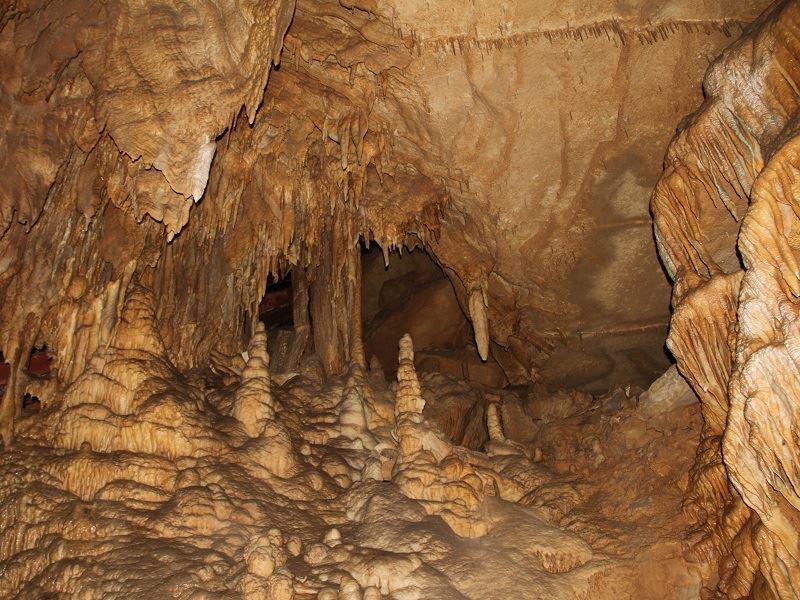 Named one of the ‘Most Beautiful Small Towns in America’ by Rand McNalley, this pretty town in the heart of the Bluegrass Region is also famous for its bourbon. It’s home to multiple distilleries, including some that date back to the American Revolution. That history is celebrated every year at September’s Kentucky Bourbon Festival, though visitors can take distillery tours all year long. It’s also worth visiting the downtown area with its historical buildings, unique boutiques and outstanding eateries. You may also want to visit My Old Kentucky State Park which houses Federal Hill, a farm owned by U.S. Senator John Rowan in 1795. The popular historic mansion ‘My Old Kentucky Home’ of the Stephen Foster ballad can be toured and is filled with more than two centuries of paintings and antiques. 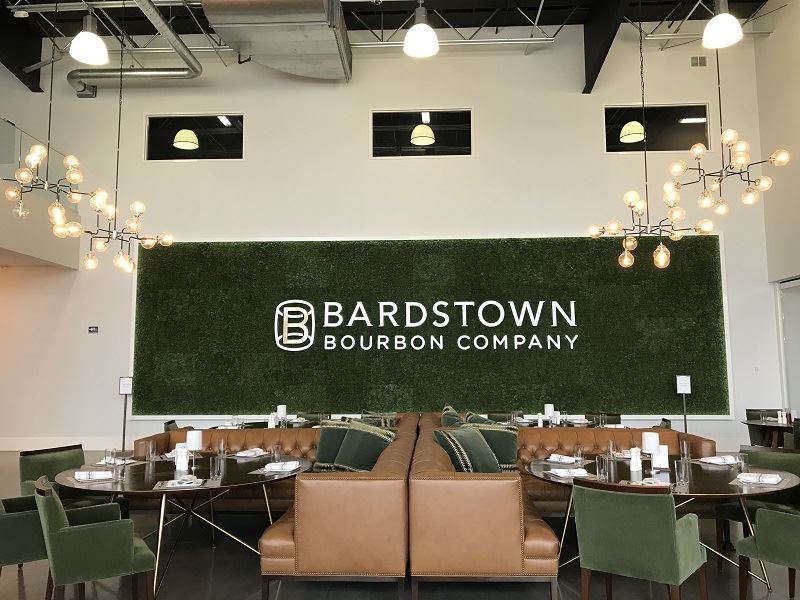 Tastes and Flavours of Kentucky

As Kentucky is famous for its food and drink, sampling it is surely one of the highlights of a visit to Kentucky. You can enjoy many of its classics in between your explorations, from cornbread cooked in cast-iron skillets to beer cheese, tomato pie and Burgoo (similar to Irish stew), but for the best of the best you might want to plan a trip around one of its foodie festivals like the Kentucky Bourbon Festival. Hosted over a week in mid-September, you’ll be able to enjoy bourbon tastings and a host of delicious food options from the myriad of food trucks along with live music and much more. Or, in late September, Paducah hosts Barbecue on the River over three days, bringing 35+ teams from Western Kentucky and beyond to BBQ over 80,000 pounds of chicken and pork to see who cooks up the very best.

95% of the worlds Bourbon is made in Kentucky (and they say 100% of the worlds drinkable bourbon!) and so you should include a distillery or two on your road trip. You can start in Louisville at the Frazier Museum which is the official starting point of the Kentucky Bourbon Trail. Featuring 18 distilleries that define Kentucky Bourbon you can take behind-the-scenes tours, meet master distillers and taste select Bourbons you can’t find in the shops. 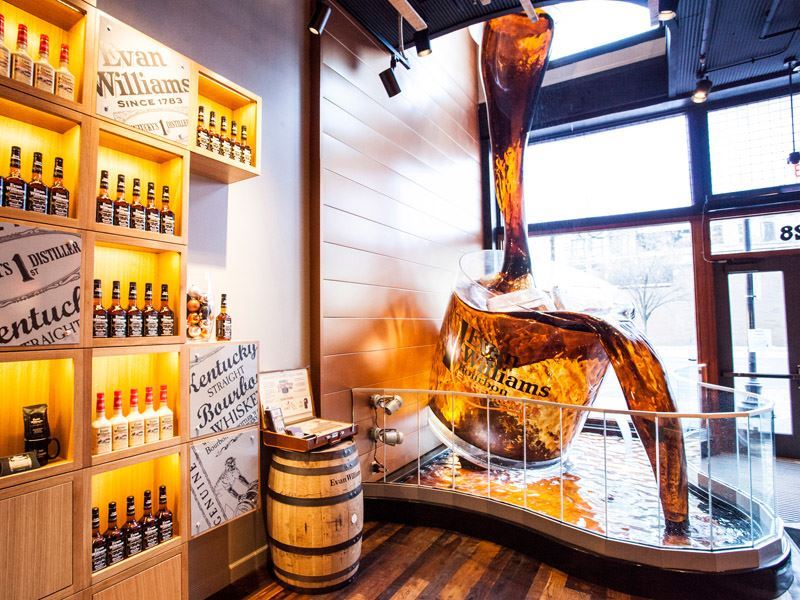 Kentucky is a great state for a rooad trip and you'll be treated to some gorgeous sights, here are two lovely options:

This roadway travels just over 71 miles from Elizabethtown, where you can view everything from horseless carriages to classic sports cars at the Swope’s Cars of Yesteryear Museum, leading to Woodford County as it passes through the central part of the state. It includes Abraham Lincoln’s birthplace which can be visited at the Abraham Lincoln Birthplace National Historical Park. It also ventures through Bourbon Country where you can enjoy stops at distilleries and take in the picturesque rolling bluegrass hills. You’ll be able to learn about the state’s early history and settlement as well as how the heritage of bourbon shaped Kentucky’s story.

This 75-mile stretch in eastern Kentucky is arguably the most scenic in the state, traveling through the heart of the mountain landscape and some of its most famous and impressive natural areas like Daniel Boone National Forest and the Red River Gorge, both of which can be accessed just off the roadway. Along the way, there are countless opportunities for hiking and checking out multiple interesting sights and attractions like the Maggofin County Historical Society Pioneer Village. Here you can step back in time on a tour through the authentic village made up of reconstructed log buildings that come primarily from the region, most of which date to the early 19th-century and all use original log building materials. Country music fans won’t want to miss Loretta Lynn’s Butcher Hollow family home in Van Lear, where she and her famous sibling Crystal Gale grew up and gave life to through their music. This area is also home to the Red River Gorge and Natural Bridge State Resort Park. 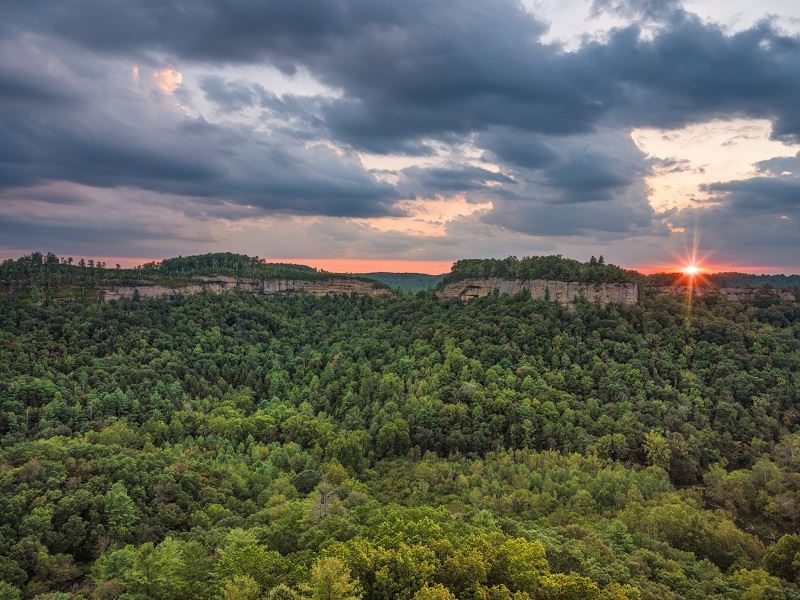