Surf the Waves of Maui, Hawaii

For me when I think of Hawaii the first thing that comes to mind is the surf.  Being a keen surfer this is definitely on my bucket list of places to catch some waves! Hawaii is a surfing mecca, known worldwide for its big wave surfing, it is also an ideal place for beginners. 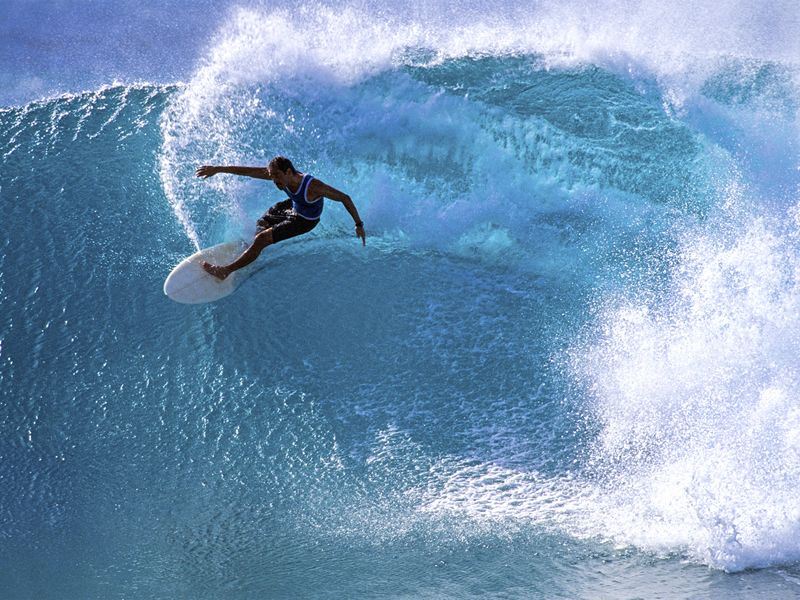 The history of surfing in Hawaii dates back to the Polynesians who were the first inhabitants of Maui.  Surfing was part of their culture and seen as an art form.

Pe’ahi, Maui’s biggest surfing break, known as Jaws on the north shore of the island only appears a few times a year, usually from October to April. It produces some monster waves, so huge that jet skis are needed to tow surfers out to them.  When the swells and tides are right the waves can reach heights of up to 70ft, therefore this is only for pros! This famous break has been surfed by the likes of Kelly Slater and Ian Walsh.  The Red Bull Jaws contest currently running now until 15th March 2013 is made up of a group of 21 big wave surfers on the hunt for the adrenaline rush of their lives surfing the waves at Pe’ahi.  The guys won’t hit the water until the face height of the waves reaches 30ft – 50ft, so the wait is on for the conditions to be right and the big swell to come in.  There is a great look out spot on the cliff top here but it can get very crowded when there is a competition on.

If you are new to surfing and that all sounds a bit scary there are plenty of surf schools who provide tuition.  The south and west side of the island are the best places to catch some smaller perfectly formed waves, and what better place to learn than in the warm waters of Hawaii.  It’s a good idea to protect your feet with a pair of wetsuit boots as the shallow reef can hurt and a rash vest to protect you from the sun and prevent getting a rash from the board.  You can take your own, although most surf schools will provide these.  With so many to choose from here’s a few I have picked:  Goofy Foot surf school in Lahaina offers 2 hour group lessons starting from $65.  Lahaina is a great place to learn to surf with a popular beginner break called the Breakwall and some fabulous scenery to boot!  The Surf Shack at Kihei provide 2 hour group lessons from $59 and Maui Beach Boys also in Kihei offer group lessons from $60.  With an abundance of surf schools to choose from you will be hanging ten in no time!

Not only has Maui got incredible waves, it also has beautiful scenery, consisting of waterfalls, jungles and volcanoes, give your aching limbs a rest from all that paddling and explore the rest of the island. Also not to be missed is a visit to Old Lahaina for an evening of traditional food, music and dancing.

For advanced surfers Ho’okipa is a good spot and can be surfed during all tides, Honolua Bay has a nice right hand wave but can get quite crowded.  Both spots are better in the winter and are also popular with locals with waves reaching 10ft – 15ft.  So, what are you waiting for?  Wax up your board and go catch those waves!