Top 10 things to do in Palm Springs

Set in the Coachella Valley at the foot of several mountain ranges, the desert city of Palm Springs is unlike anywhere else on the planet. But there’s more to this place than its Hollywood stars and Rat Pack legacy; mostly an eclectic foodie scene, excellent vintage shopping, incredible hiking, superb mid-century architecture, great golf, and year-round sunshine. We discover the 10 best things to do in a glamorous Californian playground that’s just a two-hour drive (or 30-minute flight) from Los Angeles. 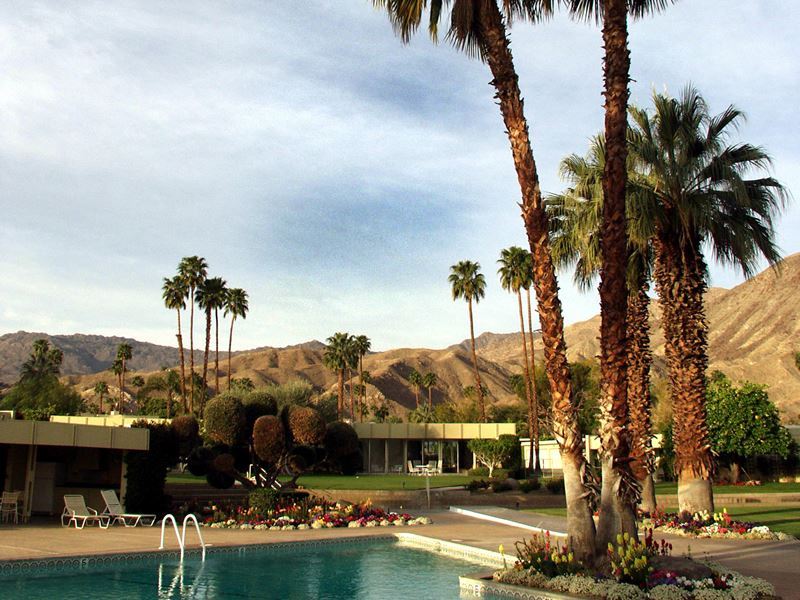 What: It’s the usual slides ’n’ rides but with a supercool 1950's Southern California surf theme at this 21-acre waterpark in the heart of the city. Perfect for those who like the idea of being hurled into the water from dizzying heights, it rewards with 18 retro-inspired rides as well as a wave pool, lazy river, fast-food outlets, and a giant water playhouse that will keep little ones happy for hours. Highlights for thrillseekers include the Pacific Spin that includes a 132-foot long tunnel that drops riders 75 feet into a six-story funnel, and the Tidal Wave Tower that chucks you down a seven-storey slide at gravity-defying speeds.

Highlights: If you can’t face playing the hellish “sunlounger Olympics”, you can rent your own private cabana. Whilst a little pricey ($120 Monday to Thursday, $150 Friday to Sunday), you’ll get a semi-private 200-square-foot area that comes with chaise lounges, table and chairs, loveseat, two tubes, a large canopy, private food service, and no towel thieves. 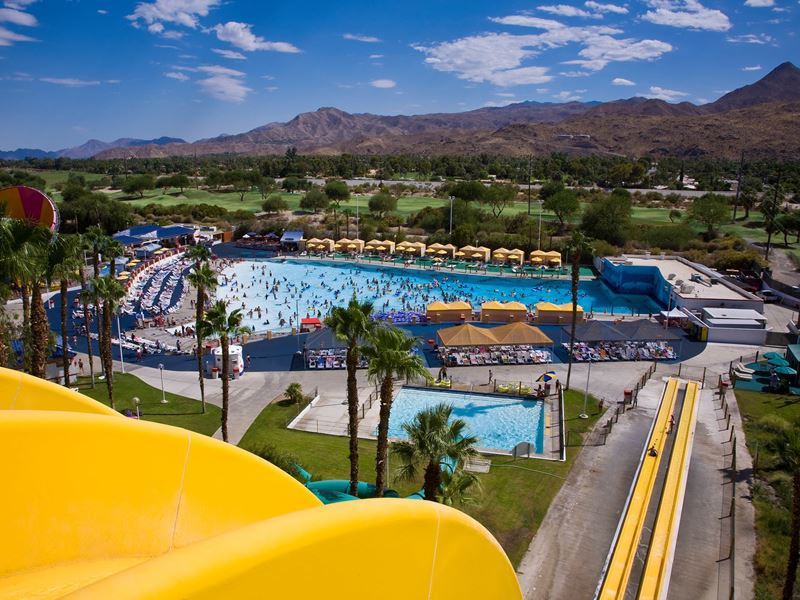 What: Given that this is where many Angelinos (LA residents) famously fly in for weekend jaunts, the city’s dining scene has upped its game in a big way (there’s been 30 new restaurant openings in the past couple of years alone). Head to Miro's (1555 South Palm Canyon Drive) for creative Slavic, Hungarian, Italian, Greek and German dishes paired with hard-to-find wines, Le Vallauris (385 West Tahquitz Canyon Way) for gourmet dining with a fixed-price French-Mediterranean menu, or Tropicale Restaurant & Coral Seas Lounge (330 East Amado Road) for award-winning world cuisine, retro cocktails, and ultra-chic interior décor.

Highlights: Located in the Design District, the chef-driven Workshop Kitchen & Bar at 800 North Palm Canyon Drive is credited with starting a Palm Springs dining renaissance (it recently scooped a 2017 Diners’ Choice Award). The Sunday brunch menu is hands down one of the best in the city - especially the Blue Crab Eggs Benedict with sautéed escarole, grilled orange and hollandaise, and the Duck Egg Huevos Rancheros with homemade guajillo sauce and tortillas. 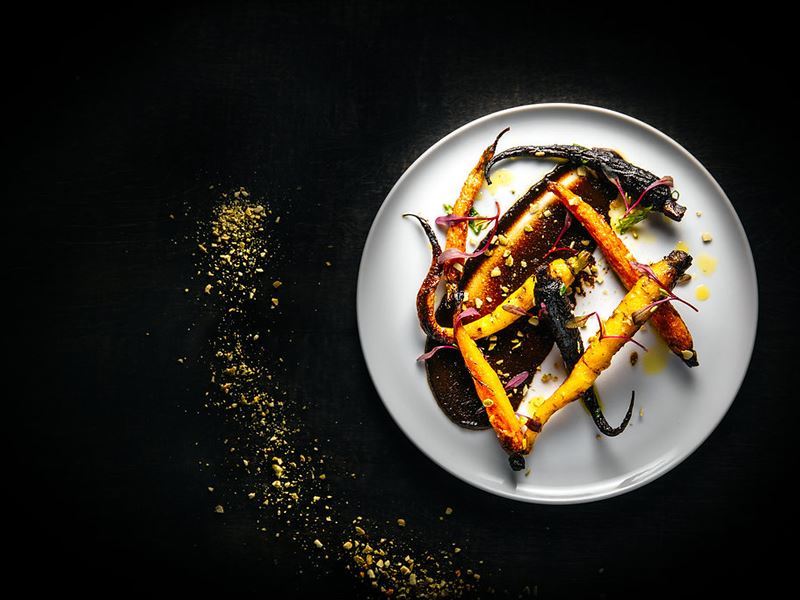 Shop for vintage bargains at the boutiques

What: The city is obsessed with all things 1950's, 1960's and 1970's, so there’s no shortage of retro offerings for vintage-lovers. Must-dos include Revivals (611 South Palm Canyon Drive) for pre-loved clothing and second-hand décor, Sunny Dunes Antique Mall (507 East Sunny Dunes Road) for one-of-a-kind home pieces, and Modern Way (745 North Palm Canyon Drive) for mid-century offerings such as lighting, brightly-coloured sofas, and unique stereo systems that you won’t find anywhere else. Also worth a visit is The Fine Art of Design (73717 CA-111 in Palm Desert) for its vintage designer pieces sourced mainly by super-wealthy Palm Springs locals.

Highlights: The clue’s in the title at the Uptown Design District on Palm Canyon Drive - a classy retail collective crammed with boutiques selling everything from designer dresses and jewellery to contemporary art and covetable mid century classic furniture. Highlights include Wil Stiles for colourful and statement-making apparel, art and accessories, and Destination PSP for posh souvenirs, branded clothing, and gifts that reflect the city’s mid-century vibe. 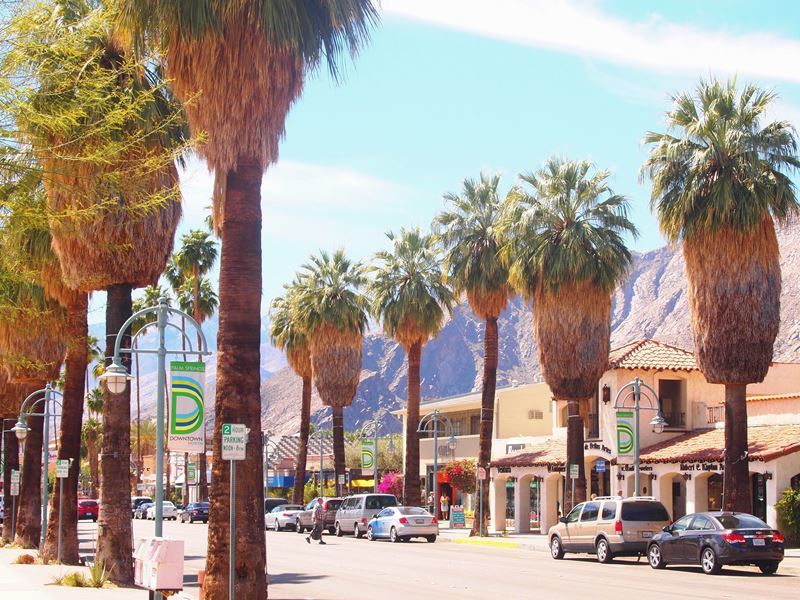 What: Established in 1985 to protect the endangered Coachella Valley fringe-toed lizard and other indigenous species, this 20,000-acre sanctuary is a jungle-like oasis smack bang in the middle of the desert. The preserve’s showstopper is the Thousand Palms Oasis - an 80-acre jewel fed by water seeping out of the San Andreas Fault. Interestingly, the land was bought by visionary stock rancher Louis Wilhelm in 1905 (he traded it for two mules and a buckboard wagon) in the hope that others would someday enjoy his incredible landscape. The family later built Palm House - a rustic log cabin that now serves at the preserve’s Visitors Centre.

Highlights: Hikers can explore the Coachella Valley Preserve on a half-dozen trails, including the 15-minute Smoke Tree Ranch Trail that encircles the oasis, and the two-mile McCallum Trail that winds through a jungle of willows, palms and, cottonwoods. The more ambitious should tackle the six-mile Pushawalla Palms Trail Loop - a strenuous trek that follows an uplifted section of the Mission Creek Fault and rewards with excellent Coachella Valley and deep canyon views. 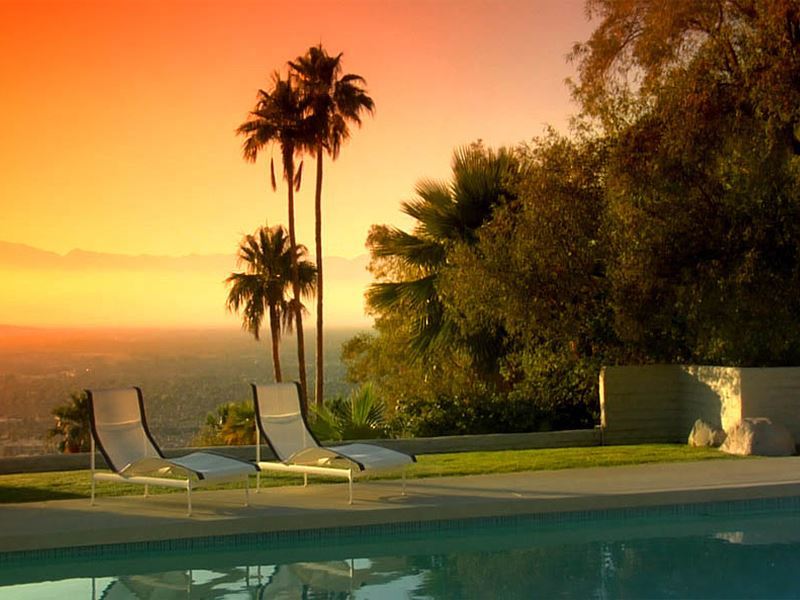 Spend an afternoon at the Palm Springs Art Museum

What: What began in 1938 as a museum about the desert has evolved into a 150,000-square-foot art complex with works by heavy-hitting modern and contemporary masters (Andy Warhol, Marc Chagall, Henry Moore, Barbara Hepworth) and up-and-comers specialising in pop and graphic art, impressionism, sculpture, and architecture. There’s a compelling permanent collection, an ever-changing schedule of rotating exhibits, art classes and workshops for adults and kids, and a remarkable four-acre Faye Sarkowsky Sculpture Garden filled with significant sculptures. Entry is free on Thursdays from 4pm to 8pm. 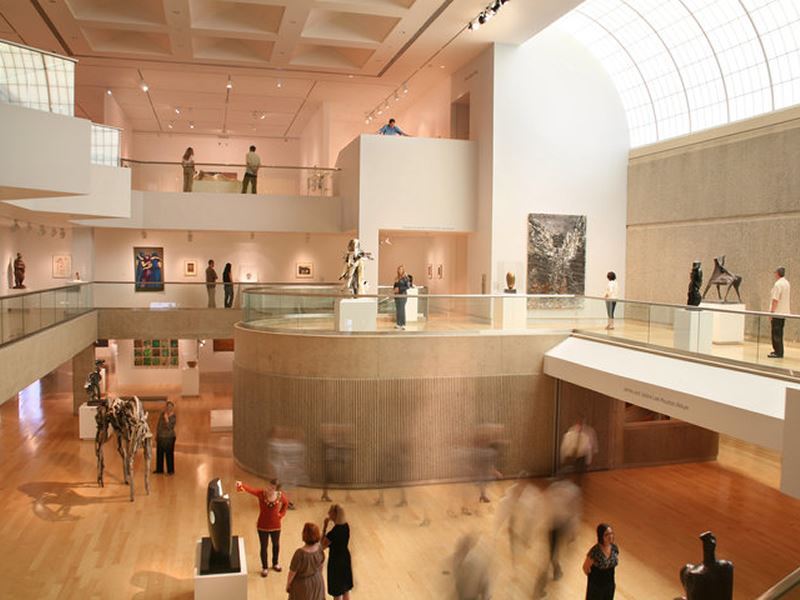 Hike the Indian Canyons in the mountain foothills

Where: Around five miles south of Palm Canyon Drive.

What: Located in the mountain foothills, the Indian Canyons (a collective term for several unique canyons) is the sacred ancestral home of the Agua Caliente Band of Cahuilla Indian. The most popular of the bunch includes Tahquitz Canyon where you can join a guided hike to the base of a 60-foot-high waterfall, and the Andreas Canyon where you can marvel at unusual rock formations, magnificent fan palms, and more than 150 species of plants. There’s also the less-visited Murray Canyon, a moderate-to-difficult hike where you may be lucky enough to spot the endangered Peninsular Big Horn Sheep roaming the high ground.

Highlights: Stretching 15 miles across the north slopes of the Santa Rosa Mountains, Palm Canyon is the Indian Canyons’ superstar. Follow the trail to see the world's largest oasis of Californian fan palms as well as stark rocky gorges and barren landscapes. Be sure to stick to the footpath that winds down into the canyon (brilliant for exploring, hiking, and picnicking), and stop by the Trading Post for stock up on maps, snacks, and Indian art and artifacts. 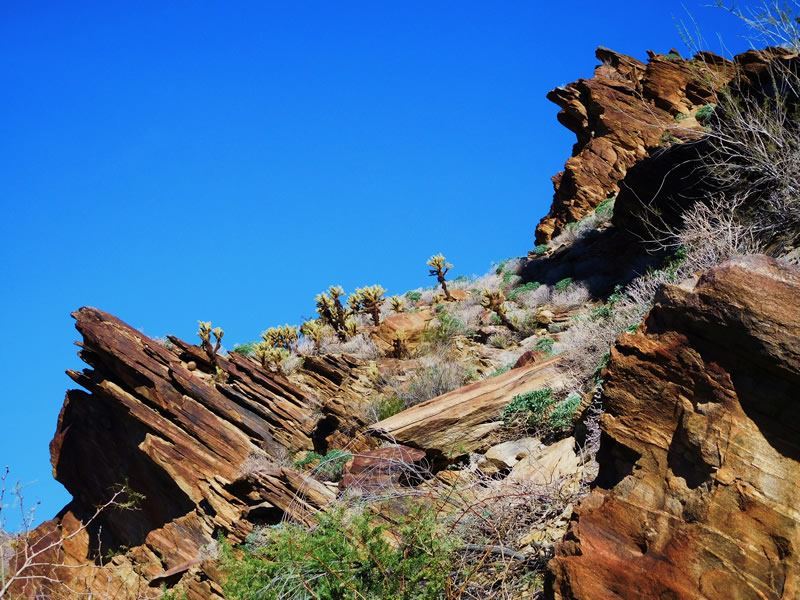 Where: At 745 North Gene Autry Trail.

What: Opened in 1996, this sprawling space is home to one of the world’s largest collections of flyable and static WWII aircraft. Even if you’re not an aviation fan, you’ll be amazed by the aircraft gallery that houses the Boeing B17 Flying Fortress, the Grumman F-14 Tomcat, the Lockheed T-33 Shooting Star, and much more. There’s also a state-of-the-art permanent and temporary exhibits, flying simulators, on-hand guides (mainly veterans happy to share their flying experiences), an extensive library, and a just-opened hangar for aircraft and exhibits from the Korea and Vietnam Wars.

Highlights: Of all the plane-related attractions, nothing beats taking to the skies in a vintage Warbird. Book the C-47 Skytrain that served in the armed forces of a number of countries during its 58-year military career ($195 per seat for a 20-minute flight). Alternatively, ride in the lovingly-restored P-51D Mustang “Bunny” that sports a “Red Tails” scheme by the famed Tuskagee Airmen of the 332 Fighter Group (rides should be available from Autumn 2017). 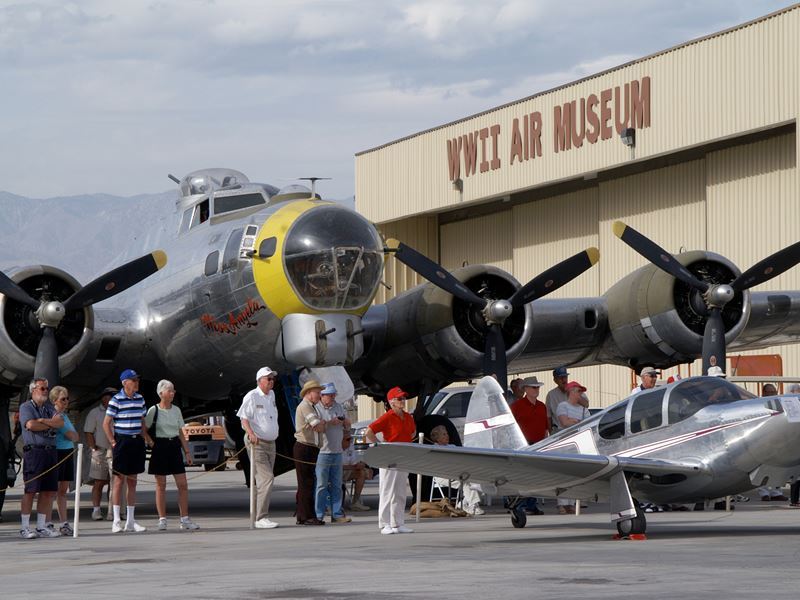 Take a ride on the Palm Springs Aerial Tramway

Where: Departing from 1 Tram Way.

What: An idea proposed in 1935 by engineer Francis Crocker to build a tramway that could transport people from the balmy desert floor of the Coachella Valley to the cooler San Jacinto Mountains in a matter of minutes became a reality nearly 30 years later. Opened in 1963, the world’s largest rotating tramcar whizzes you 8,516-feet up Mount San Jacinto in just 10-minutes. Prepare for brilliant views along the two-and-one-half mile journey, as well as plenty to do once you’ve reached the Mountain Station (choose from observation decks, a natural history museum, two documentary theatres, and 54 miles of trails located within a 14,000-acre wilderness).

Highlights: After you’ve worked up an appetite staking out wildlife in the Mount San Jacinto State Park and Wilderness Area, head to Peaks for a culinary experience 8,500-feet above the clouds. The fine-dining menu includes market-fresh speciality dishes, fresh vegetables and greens from the Coachella Valley, dry aged meats and poultry, and breads from local bakeries. Alternatively, try Pines Café - a cafeteria-style eatery that serves lighter (and cheaper) fare. 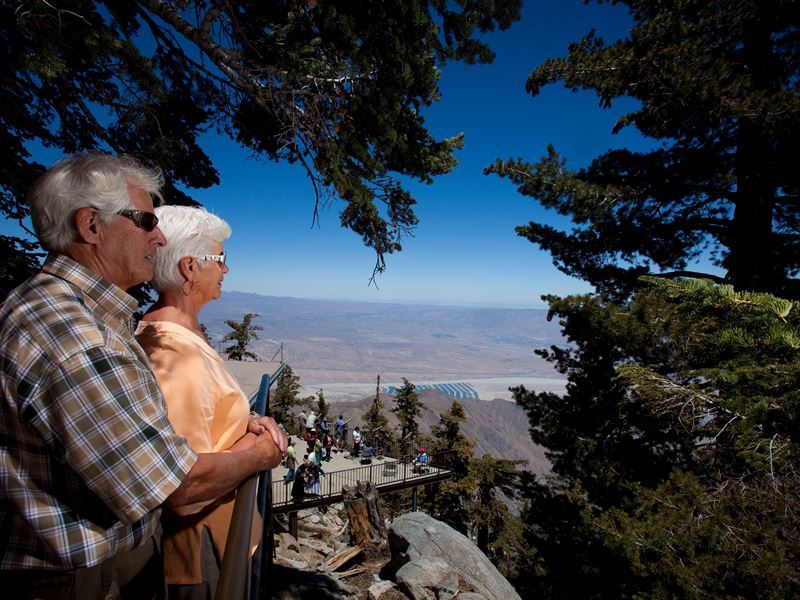 Tee off on some of the area’s best golf courses

Where: Across Palm Springs and the Coachella Valley.

What: Given there’s more than 100 courses, the Coachella Valley is a hotbed of golf activity. Must-plays include La Quinta for its five public plays (its TPC Stadium Course at PGA West was described by Golf Digest as “the most difficult in California”) and Escena Golf Club for its Jack Nicklaus-designed course with wide landing areas and well-guarded greens. Also noteworthy is Bighorn Golf Club for its two legendary world-class 18’s: The Mountains Course designed by Arthur Hills in 1991, and the Canyons Course designed by Tom Fazio in 1998 (the latter was home to the Samsung World Championship from 2004 to 2007).

Highlights: Just 30-minutes from Palm Springs, The Lights at Indio Golf Course is the only night-lighted golf course in the Coachella Valley. Known as “Play the Lights”, it’s where golfers play one of the longest par 3 golf courses in the country from 8pm until 10pm (or until midnight on special events). With seven holes measuring over 160 yards, the course proves tricky enough during the daytime- so it’s even more testing with strategically-placed artificial lighting. 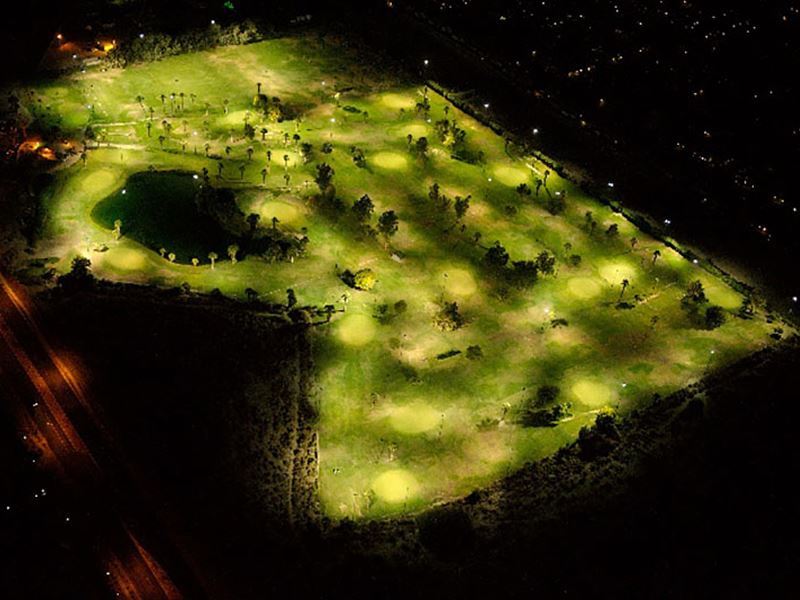 What: During the 1950's and 1960's, Hollywood stars had a love affair with Palm Springs - as did the era’s most revered architects and designers. Inspired by the stark desert landscape and modern art movements like Bauhaus and the International Style, they created what is known today as Desert Modernism (much of this was captured by American architectural photographer Julius Schulman). Nowadays, the city not only has the highest concentration of mid-century modern architecture in the world, but it’s also made it onto the National Trust for Historic Preservation’s America’s Dozen Distinctive Destinations - an annual national list of only 12 cultural tourism destinations that people don’t necessarily head to but should.

Highlights: Book one of the year-round Desert Modernism tours or take a self-guided tours to take in the city’s notable mid-century modern landmarks (maps are available at the Palm Springs Official Visitor Centre which was once the Tramway Gas Station designed by Albert Frey and Robson Chambers). Additionally, join the thousands that head to the city for Modernism Week - a 10-day celebration of mid-century architecture and design that takes place every February. 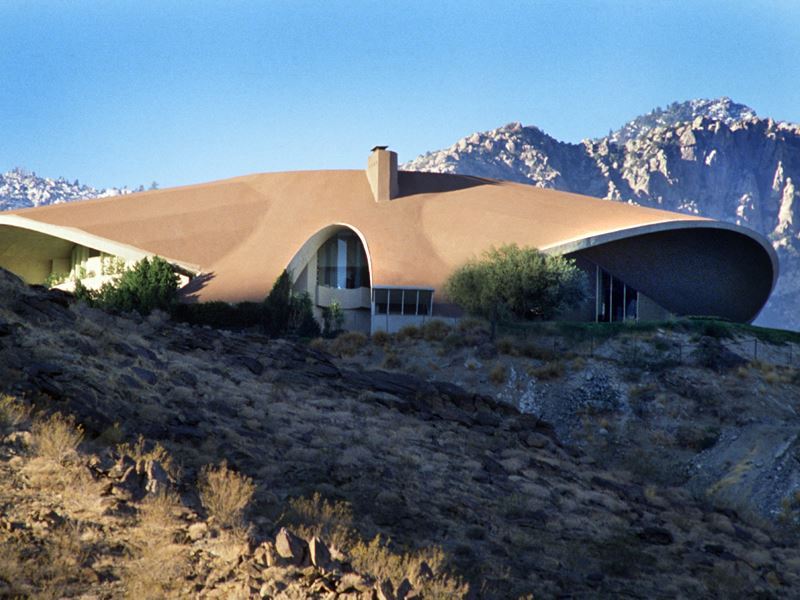