Established in 1984 on the site of the old sardine cannery on Monterey Bay, the aquarium attracts around 1.8 million visitors a year. Open every day except Christmas Day the Monterey Bay Aquarium has scientific credentials which legitimise the enormous collection of over 38,000 animals, of which exist 623 species. The old cannery closed when the fishing industry collapsed in 1973, but every day at noon, the old cannery steam whistle is blown to commemorate its heritage. John Steinbeck’s “Cannery Row”, ensures the area and its history won’t be forgotten. 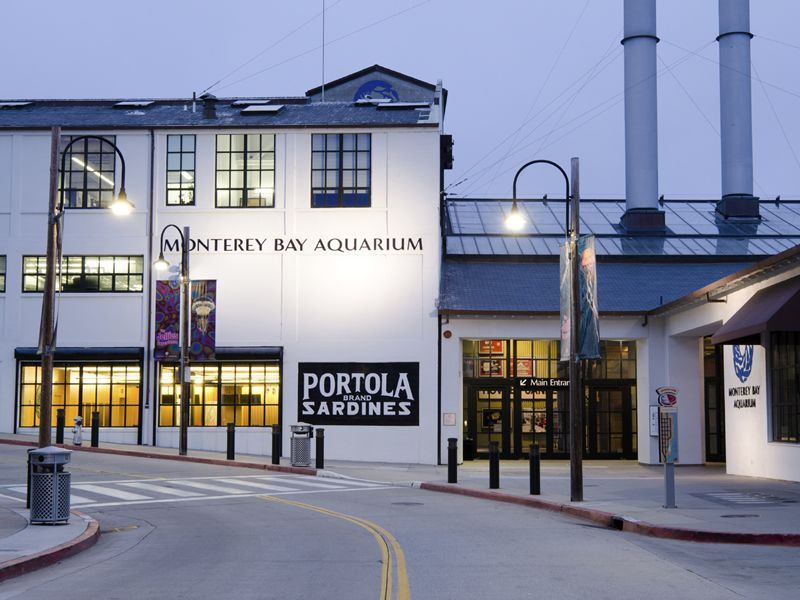 With David Packard (from Hewlett-Packard) as the sponsor before his death in 1996, and his daughter as one of the directors, the ethos of the aquarium stayed true to its ideals – it wasn't there purely to entertain in a gimmicky way or terrorise sea-life, but rather to learn, by studying the behaviour of fish and marine life and contribute to world marine science. Their aim “to inspire conservation of the oceans” can be seen throughout the aquarium to this day, in the various programmes initiated which you can follow – such as the tagging of great white sharks. The sharks are taken to the aquarium when they have become inextricably caught up in fishing nets and as a result of the tagging scheme they can be tracked and monitored, and the information fed back to relevant parties.

Fresh ocean water is pumped into the tanks within the aquarium ensuring an optimum environment for the sea-life, including sting rays, sea horses, jelly fish, blue and yellow fish tuna amongst many other varieties. There is an open top large tank which aims to recreate the wider Bay with water surging around suspending jelly fish. There is a large tank within which a kelp forest grows, with 80 different species – not all introduced by man, some have just come from the Bay over the top of the tank. Sea otters can be seen swooping and diving amongst the kelp from above and below the water, as the viewing platforms have different stages. The sea otter is the only mammal kept here periodically before being released back to the wild.

There are some unique and memorable experiences to be had within the aquarium – perhaps the jelly fish tank will be your thing, as the psychedelic colours of the jellyfish are illuminated. There are daily shows which allow you to learn and view the best of the sea-life in the aquarium. The largest window in the world (it is America after all) is sited at the edge of the aquarium which gives you an insight into the Bay’s life; you can watch a daily feed and see which animals want to visit. It is an unusual insight into the life of Monterey Bay and a most unique aquarium full of diverse animals which are not there for entertainment’s sake, but they definitely are entertaining!