Our Essential Guide to Alabama


Places to go and things to see in Alabama

You’ll be welcomed to Alabama’s largest city by the world’s largest cast iron statue of Vulcan – the Roman mythical god, overlooking the downtown with its jazz clubs, theatres and great restaurants. Between 5th and 6th Avenue you’ll discover the history of the modern civil rights movement showcased at the Birmingham Civil Rights Institute, and just next door is another key attraction in the city - the 16th Street Baptist Church, a civil rights historical site. It’s worth timing your visit to Birmingham to fall on a Sunday so that you can attend a service at this church to hear the superb southern gospel choir.  Also nearby is the Alabama Jazz Hall of Fame, an art-deco museum honouring great jazz artists with ties to the state of Alabama.

A visit to the Barber Vintage Motorsports Museum is a must, home to the world’s largest collection of motorcycles, over 1,200 vintage and modern motorcycles and race cars are on display. Nearby are the Outlet Shops of Grand River, home to more than 65 leading designer and top name brands. In the evening you can spend time in one of Birmingham’s entertainment districts located throughout downtown including UpTown near the convention centre, at 5 Points South, Avondale and Lakeview. 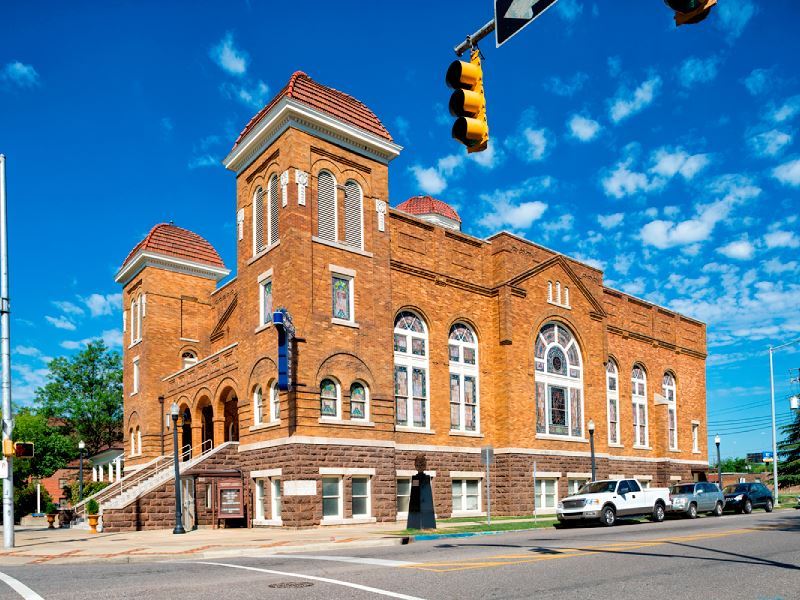 Voted one of the best historic cities in America, Montgomery is home to both Civil War and Civil Rights history, at almost identical locations, although years apart. In 1861, Southern politicians gathered at the State Capitol in Montgomery and formed the Confederate States of America, and the telegram igniting the American Civil War was sent from Montgomery. Stand where Jefferson Davis was inaugurated President and tour the First White House of the Confederacy. Almost 100 years later, Rosa Parks refused to give up her seat on a Montgomery bus and the modern Civil Rights movement in America was born. The downtown is easily walkable and in an afternoon you’ll be able to explore where Rosa Parks made history, Dr Martin Luther King Jr. preached and where American music legend Hank Williams sang. Montgomery is a river city with an entertainment district located next to the city’s downtown hotels and attractions, all within walking distance. 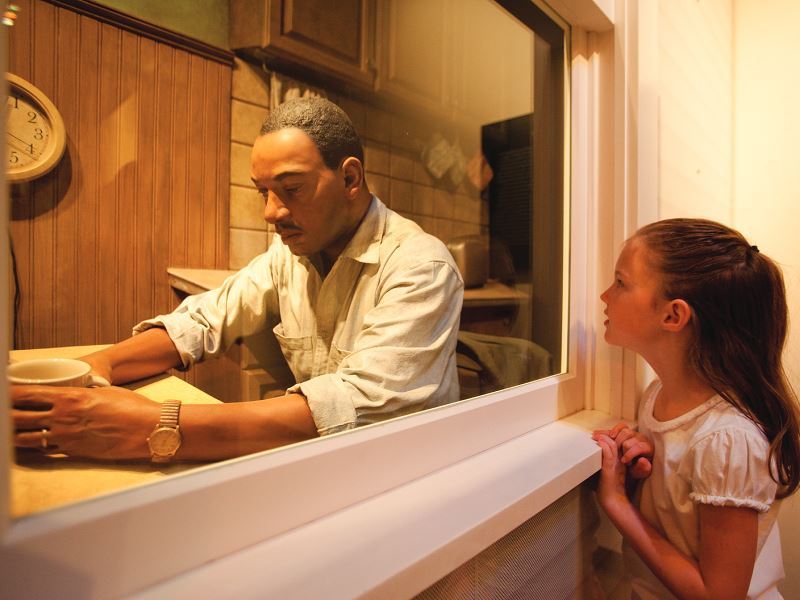 Huntsville is the city where the rockets that sent man to the moon during the U.S. space race were made, and now is home to the largest space museum in the world. The U.S. Space & Rocket Center has one of the most extensive collections of 1,500 space artifacts, including rockets, engines, spacecraft, simulators, and hands-on exhibits.  It is the only place in the world where you can stand under a “full stack” - space shuttle orbiter, solid rocket boosters and external tank - and the mighty Saturn V. Visitors can feel G-forces on the Spaceshot, view artifacts such as the Apollo 16 capsule, Apollo 12 quarantine facility and a moon rock and experience breath-taking films in the IMAX or 3D theatres.

Also in Huntsville is the newly opened Orion amphitheatre, an 8,000 capacity venue. Predominantly a music venue focusing on the regional roots of blues, soul and rock n roll, it will also host arts festivals and markets. 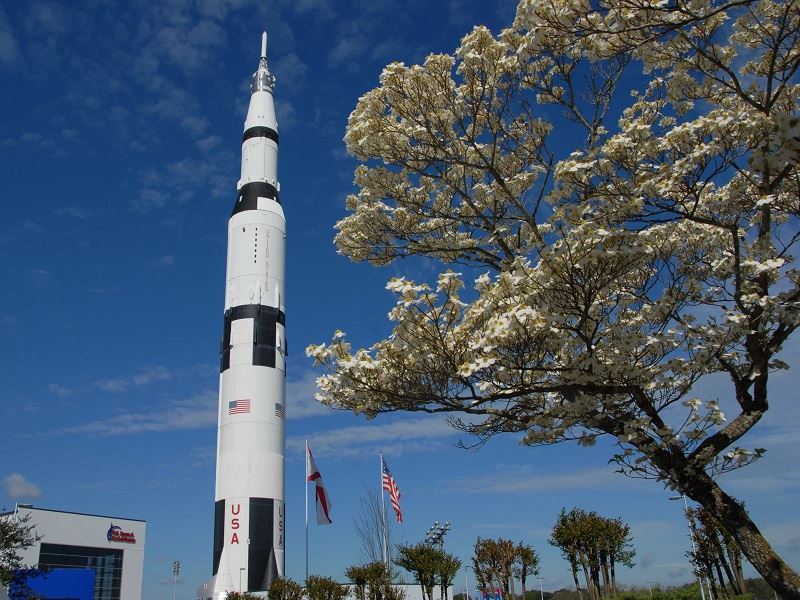 Music lovers absolutely must include Muscle Shoals in their itinerary. Called the Hit Recording Capital of the World in the ’60 when the Rolling Stones, Aretha Franklin, Paul Simon and other legends came to these four small cities in northwest Alabama to record their hits. Members of the Lynyrd Skynyrd band recorded in Muscle Shoals between 1970-72 and went on to write the worldwide hit and local favourite - Sweet Home Alabama.

Whilst you’re there, you can Tour FAME and Muscle Shoals Sound Studios where Wilson Picket recorded the his hit record Land of 1000 Dances, the Alabama Music Hall of Fame, and even hear live music in a rural saloon built under a massive rock – the Rattlesnake Saloon.

You can also see the birthplace and museums of both Helen Keller, political activist and the first deaf blind person to earn a Bachelor of Arts degree and W.C. Handy “Father of the Blues”. 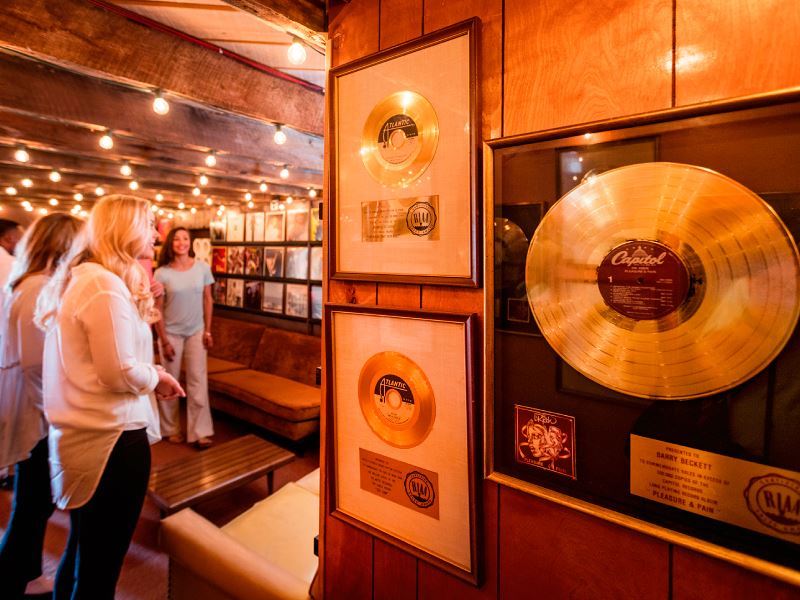 You may associate Mardi Gras with New Orleans, but Mobile is where Mardi Gras was first celebrated in America. Alabama’s port city was founded in 1702 as the original capital of the Louisiana Territory and is nestled along the beautiful Gulf of Mexico. Here you can taste fresh seafood from the nearby fishing village of Bayou La Batre, made famous in the film Forrest Gump. Visit the 65-acre Bellingrath Gardens with its museum and the beautiful Cathedral of the Immaculate Conception. Explore the mighty battleship, USS Alabama, that won nine battle stars during World War II, and see more than 25 other pieces of military craft. Another popular excursion is taking the short ride via a bridge to Dauphin Island, Alabama’s barrier island, for bird watching. And across Mobile Bay is the charming small town of Fairhope, romantic and full of small, boutique shops. 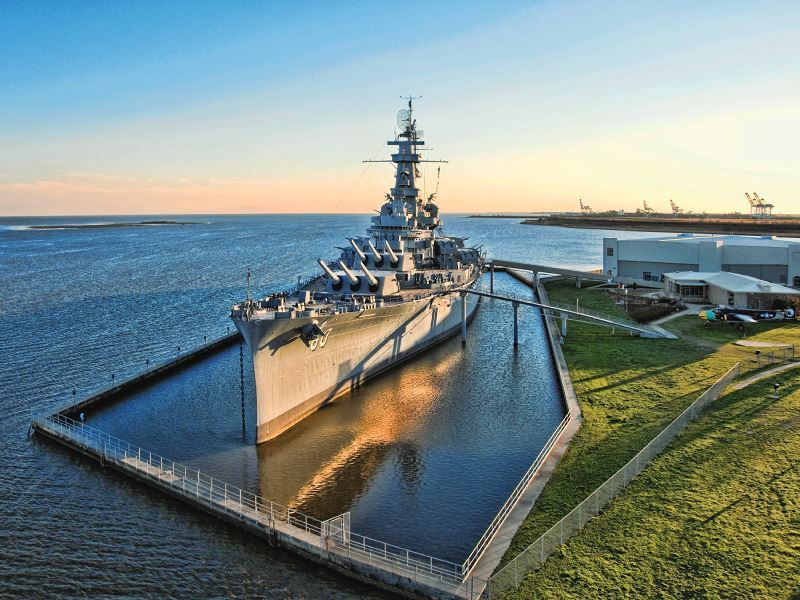 Just beyond Mobile you will find the thirty-two miles of sugar white sand beaches and warm Gulf of Mexico waters at Alabama’s twin resort cities of Gulf Shores and Orange Beach. All along Alabama’s coast fresh seafood and celebrations abound. Gulf Shores hosts the National Shrimp Festival in October and the Hangout Music Festival in May. 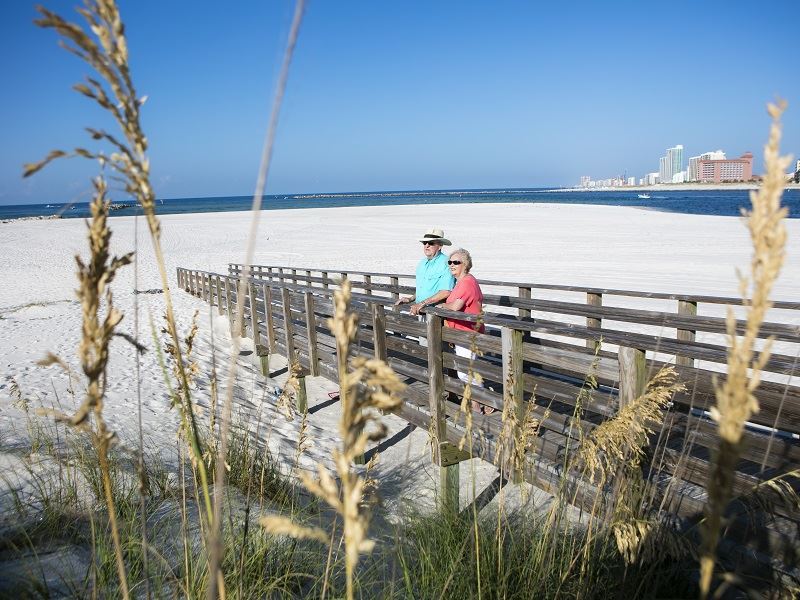 Food to enjoy in Alabama

Throughout the Deep South, barbeque is a way of cooking large cuts of marinated pork and other meats slowly over a wood fire, resulting in a succulent and smoky meat. The twist in Alabama is that a white barbeque sauce is often served with the meat, like a mayonnaise with vinegar and mustard. rather than the more typical sticky tomato based sauces. Enjoy barbeque served with sides such as potato salad and coleslaw.

It’s no secret that the delicious Deep South cuisine has more than its fair share of fried specialities, starting with fried chicken. Pieces chicken are tenderised by soaking overnight in brine or buttermilk, then fried in a flour coating with a sprinkle of spices, resulting in juicy meat on the inside and crispy coating on the outside. If you’d rather your chicken was boneless then look out for “chicken tenders” which are chicken breasts or goujons fried in a crispy coating.

Author Fannie Flagg made this dish famous in her novel Fried Green Tomatoes at the Whistle Stop Cafe, the inspiration for which is found in the real-life Irondale Café. Crispy on the outside, soft on the inside, fried green tomatoes are a symbol of the state’s agricultural heritage, often served as a side dish at breakfast or as an accompaniment for barbeque.

Prolific in Alabama rivers and lakes, catfish have long been a favourite catch and a favourite dish. Whether they’re seasoned dry or doused in batter, you can’t go wrong with any of the species once they’re sizzling and served with lemon and tartar sauce. 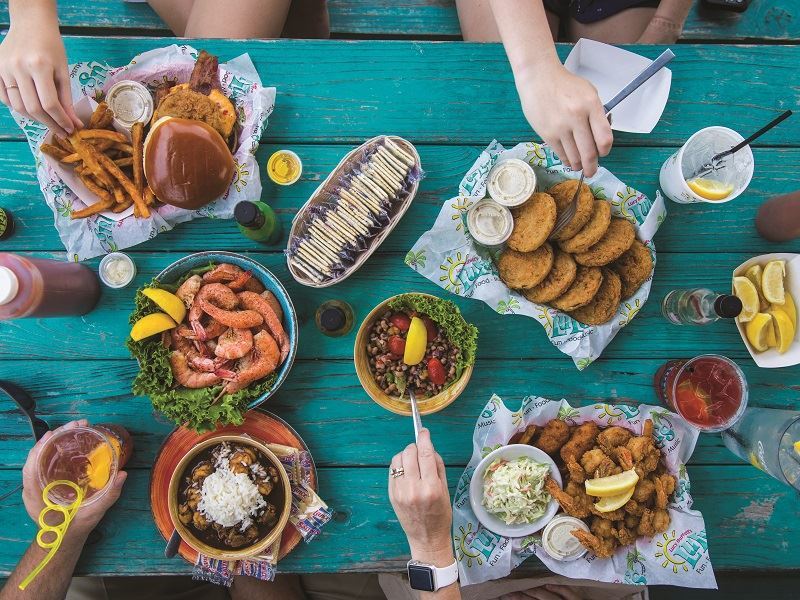 You’ll find Pecan orchards throughout 39 of the 67 counties of Alabama, and in fact pecans are the state nut of Alabama. The Pecan Pie is a really popular dessert, but there are lots of other pecan treats, and when you’re driving I-65 make sure to stop at one of the farm shops to sample the nuts and nut themed products.

George Washington Carver helped raise awareness among Alabama farmers of peanuts’ many uses. Today, roughly half of the peanuts in the United States are grown near Dothan, the self-proclaimed Peanut Capital of the World. Eat them boiled, the true Alabama way.

As you head south towards Mobile and Gulf Shores, there is an increasing influence of Creole in the food, and Gumbo is a popular dish - a stew combining meat with seafood and vegetables such as peppers, celery and tomato, topped with some cooked rice. There’s even a Gumbo Trail in Gulf Shores that will take you around some of the best spots for Gumbo on the Gulf Coast.

The waters off Alabama’s Gulf Coast provide a plentiful supply of shrimp, as you’ll know if you’ve watched the film Forrest Gump. You’ll find shrimp on menus throughout Alabama, but especially as you reach the coast. A popular dish is Cajun shrimp coated in cornmeal and fried to make a crunchy crust, then mixed with a spicy Cajun sauce, and delcious shrimp tacos are also worth sampling.

You'll find peaches everywhere in Alabama - fresh, canned and cooked in pies, with the favourites being cobbler and ice cream. If you're driving from Birmingham to Selma on the Route 65 Interstate, make sure you stop at Clanton in Chilton County which is the peach capital of Alabama.

A creamy dessert of bananas and vanilla wafers has its roots in Mobile. Longshoremen unloaded bananas at the city’s docks, making Mobile the nation’s third-largest importer of bananas in the early 1900s. It’s like trifle, with layers of custard, whipped cream, vanilla wafers and sliced banana. Sometimes the banana pudding is topped with meringue which is browned under the grill making it extra delicious! 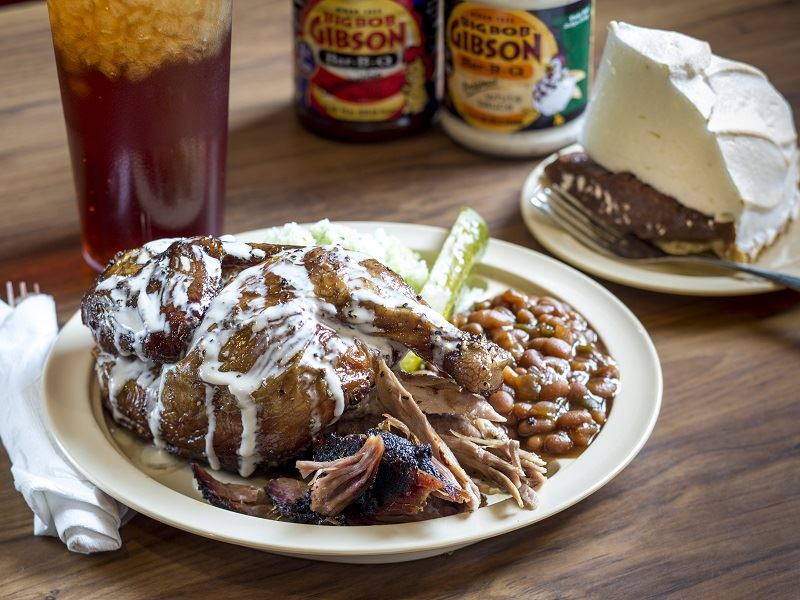